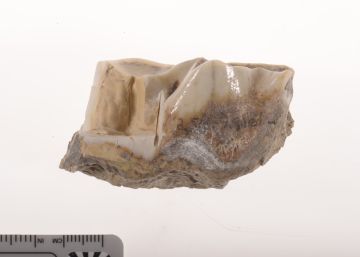 The enamel of a tooth of an already extinct rhino could revolutionize the study of the evolution of life. A group of scientists has managed to extract genetic information from the teeth of a specimen that was born in Eurasia more than 1.7 million years ago. This is the oldest genetic data recovered so far. Beyond the record, the technique and materials used could help to know the most remote past of the species, starting with the human one.

In recent decades, advances in the study and analysis of ancient or ancestral DNA have not ceased to give scientists joy. With new and precise techniques it has been possible to recover more and more complete genetic information from Crusaders of the Middle Ages, millenary corn or girls over 10,000 years ago. The milestones in this kind of genetic archeology are two: the sequencing of the fossil genome of hominids in the Bone Gap of 430,000 years ago and that of an equid caught in the permafrost 780,000 years ago But no one had managed to go back further, at least with DNA.

A large group of scientists specialized in ancestral genetics tried to find DNA among the fossils of the Dmanisi site. Located in Georgia, in the Caucasus, between the Black Sea and the Caspian Sea, the remains of the genus were found here Homo Oldest outside of Africa. As in other similar, such as Atapuerca, along with humans, hundreds of remains of large animals have been found with an age of almost 1.8 million years. Some of them, in particular of already extinct rhinos, recovered about twenty bones and teeth.

Proteins contain less genetic information than DNA but retain it much better.

They failed to find DNA but complete sequences of proteins that, after all, are the result of the information contained in the DNA. They identified six types of them. Unlike DNA samples, which allow the entire genome to be sequenced, proteins only encode a specific part of it. But they obtained enough genetic information to reconstruct many of the branches of the rhinocerotide phylogenetic tree.

Thus, molecular analyzes place this Stephanorhinus as belonging to a sister group formed by the woolly rhinoceros and the Merck rhinoceros, both also extinct, and relatively further from the five current species. Apart from taxonomic interest, work, published in Nature, shows that proteins can be an alternative way to DNA to enter the field of genetic archeology.

"This same approach of proteome sequencing can be used to go where DNA does not reach," explains from Copenhagen, the paleogenetic specialist at the University of the Danish capital, Jasmine Ramos Madrigal, co-author of the study. The integrity of the DNA is compromised as the clock goes backwards, especially in temperate, warm and humid regions. "Proteins are more stable and retain much better than DNA," he adds.

The oldest genetic data obtained from DNA is from a horse about 0.78 million years ago

Until now, the only protein used in studies of ancient genetics was collagen, ubiquitous in bones. But, unlike enamel proteins, it hardly shows genetic variability over time, so little can be said about a million years ago collagen sample on evolution. In addition, Ramos recalls, "it is very easily contaminated, since it is a basic piece of skin", while to spoil a sample of enamel it would have to be bitten.

Enamel is the hardest element in the human body and the one that is best preserved in the fossil record. So researchers believe that if you applied this technique to the study of the teeth of human fossils, you could go much further in the genetics of human evolution. The main author of the study, the researcher at the University of Copenhagen, Enrico Cappellini, says in a note: "For 20 years, ancient DNA has been used to address questions about the evolution of extinct species or adaptation and human migrations, but it had its limitations. Now, for the first time, we have recovered ancient genetic information that allows us to reconstruct molecular evolution beyond the time limit imposed by DNA conservation. "

94% of boat arrivals in August are concentrated in four days