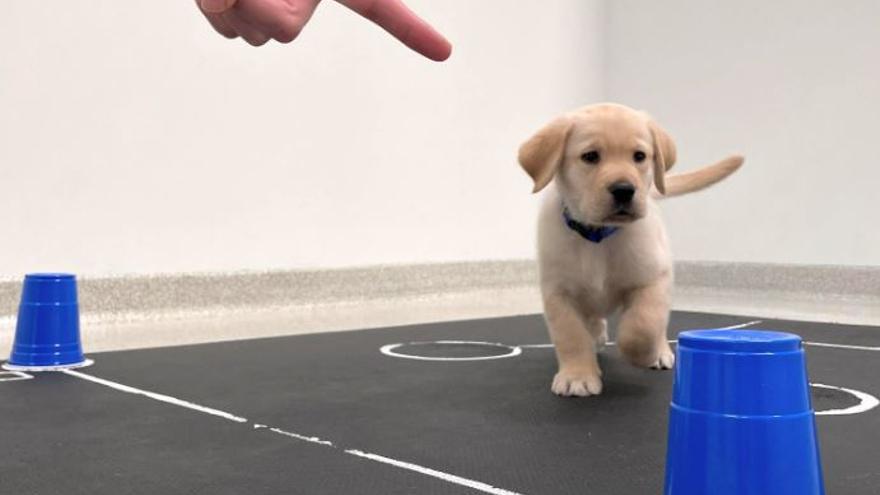 Dogs have a great capacity to communicate with people and their social skills can be present from a very young age without having to be learned, although some puppies start out better than others based on their genetics. Research from the University of Arizona published this Thursday by Current Biology indicates that puppies respond to people's social gaze and can successfully use information provided by a human from a very young age and before extensive contact with them.

The team, which has studied canine behavior for a decade, used 375 two-month-old puppies who had not been separated from their litters, so their interaction with humans was limited. All of them came from an organization that trains future service dogs. The study's lead author, Emily Bray, explained that most dogs were capable, among other things, of finding hidden food by following a human's finger to the indicated location.

"There was evidence that these types of social skills were present in adulthood, but here we found evidence that puppies - like humans - are biologically ready to interact in these social ways," he said. The researchers knew the pedigree of each puppy for several generations and the degree of kinship between them, so they could create a statistical model to evaluate genetic factors versus environmental factors.

Genetics "accounted for more than 40%" of the variation in the puppies' ability to follow human gestures of pointing, as well as the variation in the time they maintained eye contact during a task designed to measure their interest in people. indicated the University. Genetics can also help explain why some dogs perform better than others on social tasks like following signaling gestures.

The puppies had to participate in tasks such as following the indication with their finger to get a hidden treat, looking a person in the face while talking to them or trying to get a prize locked in a container, to observe, in this case, what often the animal sought help from the human. Although many of the pups responded to physical and verbal cues, very few sought help to try to open the container, suggesting that, although they are born knowing how to respond to human-initiated communication, the ability to initiate it may come later.

Puppies are adept at the outset when it comes to gesture and eye contact-based social communications, but this only worked when people also initiated the interaction by speaking to puppies in a high-pitched voice. Now, the team is collecting cognitive data and blood samples from adult dogs to conduct a genome-wide association study, with the goal of identifying genetic markers associated with these social behaviors.