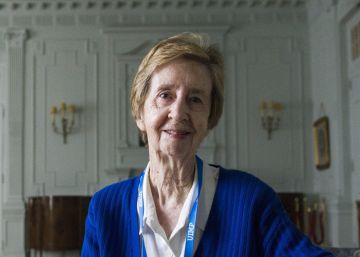 Margarita Rooms She has been an exceptional scientist, possibly the most important in the history of our country until the beginning of this century and, without a doubt, the best known. Margarita Salas has given the name to many streets of a good number of Spanish cities and towns and to countless schools and institutes. That she achieved this in a country like ours, in which science has never been given enough importance, and also as a woman, is of relevance almost as great as that of its scientific quality.

Margarita was many things in her eighty years of life. Graduate in biochemistry, postdoctoral student in the laboratory of Severo Ochoa in New York, pioneer and driving molecular biologist with her husband, Eladio Viñuela, and other scientists with a vision of the creation of the first research center in this discipline that opened in Spain. In it she was head of a laboratory of the most productive in the country. Dozens of Spanish researchers and researchers were trained with it and some of them currently hold important scientific positions. His life-long research was focused on the study of a modest virus that, as she explained laughing, "has a difficult name": the bacteriophage phi29. Margarita's work discovered important mechanisms of action of polymerase, a molecule responsible for the replication of DNA from the virus, and also produced a series of international patents on the use of this polymerase in genetic engineering and biotechnology. To get an idea of ​​the scope of these applications, it is enough to know that his first patent was given to the Higher Council of Scientific Research (CSIC), the institution where Margarita worked all his life, half of the income that the CSIC received for all registered patents during its validity. Margarita Salas obtained important awards for her career and was the first Spanish member of the American Academy of Sciences and also the first scientist who entered the Royal Spanish Academy.

For some time, Margarita too he dedicated his energy to talk about the situation of women in science. She herself recognized that it had taken time to be aware of the gender biases that occur in the field of research. Once it was, it was common to hear her explaining how machismo had suffered in her early scientific career, for example, in the way Alberto Sols, her thesis director, treated her, avoiding addressing her directly. But he also remembered two men who had been beside him unconditionally. During her postdoctoral stay at Severo Ochoa's laboratory, Margarita was accompanied by her husband, Eladio Viñuela, who was also a researcher. Ochoa separated them into different groups and Margarita always suspected that she did it for her: “He told us he did it to improve our English, but I always suspected it was to prevent me from becoming only Eladio's wife, even as a researcher ”, Remembered the scientist. And it was precisely Viñuela who had a gesture of generosity with his wife when they returned to Spain. Both were working on the same, the bacteriophage phi29, but he decided to depart and start a new line of research to leave Margarita the leading role in the study of the bacteriophage, which she took advantage of so magnificently.

Margarita was a generous person with everything that surrounded science. He always had time to attend to journalists and, despite his shyness and discretion, he lent himself to be interviewed when asked, the journalist from an important medium or a small medium almost unknown. He also always had time to talk about research and its precarious situation in Spain, and about Severo Ochoa, and about the role as a woman in science. He gave lectures, talks, collected prizes … and at eighty I was still going to the lab Until almost the end.

Margarita Salas has been an honorary member of the Association of Women Researchers and Technologists (AMIT) since 2002. At AMIT we were, and we are, very proud of it because it has been a reference for all, for the scientists who have been in the gap for many years, for the young women who begin their career and even for the girls who begin to consider research as a Option for your future. We thanked him before but we also want to show our enormous gratitude for being inspiration and example for so many of us.

Carmen Fenoll She is president of the Association of Women Researchers and Technologists (AMIT). Paul's Flora She is the president and founder of the same entity.