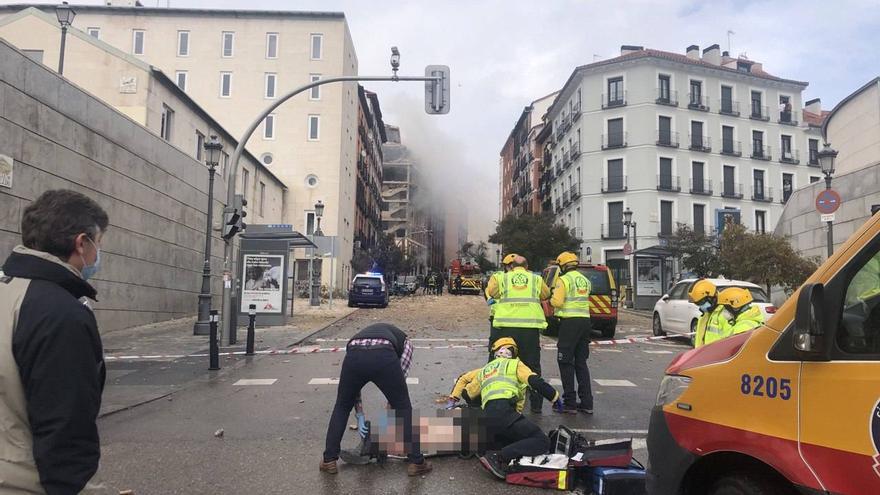 A strong explosion has been registered shortly before 3:00 p.m. in the center of Madrid. A building at number 98 on Toledo Street, in the La Latina neighborhood of Madrid, has been badly damaged after the deflagration. Sources from the Government Delegation point out to elDiario.es that the most probable cause of the explosion is a gas bagging and the Madrid City Council confirms that several injured are being treated by the emergency services deployed in the area.

The property, located next to a nursing home, a school and the Iglesia de la Paloma, has been badly damaged, completely losing the roof and partitions of five of its seven floors. The number of victims is not known, although several people are being treated by emergency teams.

The affected building belongs to the Church of La Paloma, as sources from the Archbishop have confirmed to elDiario.es. It is the parish house, where the priests of the temple live. Several priests lived on the fifth and sixth floors of the building where the explosion originated. There is a priest trapped in the rubble on the fifth floor, another missing and two wounded who are being treated.

The annex is a nursing home, Los Nogales La Paloma, which is currently being evacuated. Company sources assure that no residents or workers are injured. Toledo Street is full of rubble, as well as the courtyard of the La Salle La Paloma school. The hotel in front of the residence has also been evacuated, according to witnesses.

The emergency services have cordoned off the area from the Puerta de Toledo roundabout. Many people crowd the perimeter asking for their relatives. Oihane, a neighbor in the area, recounts what happened: “I heard a giant explosion. I was walking and a very strange gray cloud began to rise on the Toledo Bridge.” A maintenance worker at the residence, Juan Miguel, assures elDiario.es that the elderly are going to be transferred to other residences in the group and are awaiting orders from the Fire Department. Nine crews are deployed in the area and another 11 from Samur, according to municipal sources.