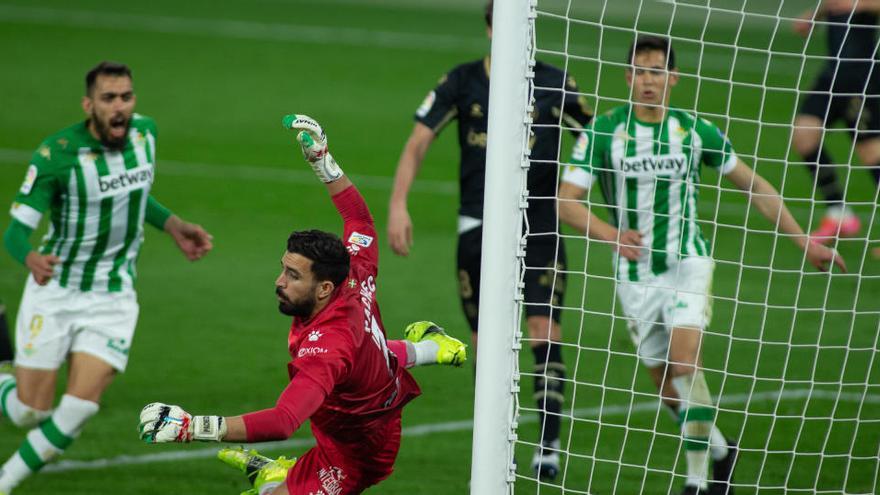 A spectacular comeback from Betis in the second half, which began with an adverse 0-2, with two goals from Borja Iglesias and another from Joaquín Sánchez (3-2) sank the Alaves, what he added his fourth loss in a row that leaves him in relegation places.

The Sevillian team continues with its great streak and adds the fourth consecutive victory that affirms him in the European positions, this time by not losing faith and always looking for a triumph that in the first half was very complicated.

The Vitoria team arrived at the crash with more urgencies than they had left on the previous day, when he fell to Osasuna in Mendizorroza (0-1) and accumulated the third consecutive defeat, since Valladolid and Elche had won at the weekend and this left him provisionally in relegation positions.

In Villamarín, the scene where he certified his permanence last year, victory was more necessary and his coach, Abelardo Fernández, already announced that he would make changes to vary the dynamics, with which one of the novelties was the presence in the ownership of the young Uruguayan Facundo Pellistri, on loan from Manchester United in the winter market.

The Betis, on the other hand, are settled in the European zone of the table thanks to the last three wins in a row and, with the last defeat of Villarreal, another victory left them more consolidated in sixth place.

His coach, the Chilean Manuel Pellegrini, specified in the preview that he wants to get away from all those accounts and that he only focused on the game against Alavés, so he did not reserve the Frenchman Nabil Fekir, fresh out of an injury and also warned of a penalty for accumulating cautions, which could jeopardize his participation in the derby against Sevilla next Sunday at the Sánchez Pizjuán.

He also put Juanmi Jiménez in the lead, whom he rewarded for the goal he scored and which meant the victory (0-1) against Cádiz on the previous day and soon the mobility of the Malaga player was seen among the Alava defense.

But the one who scored in the first time that arrived was the visiting team, after the Brazilian central made a foul on the edge of the area and that the direct free kick was thrown with force through the barrier Joselu Mato, with which he added his sixth goal in The league in the current season.

The first quarter of an hour had not been fulfilled and those of ‘Pitu’ Abelardo were already 0-1, but then they had to prove themselves in defense before the logical push of the locals, who had minutes after their chance in a double shot by Juan Miranda and Juanmi, although it was the Basque team that opened the gap in their second arrival, one hundred percent effective.

Édgar Méndez, who on this occasion occupied the attack site with Joselu, finished off a very easy header with a lateral center to the area that goalkeeper Joel Robles could not answer, so the Verdiblanco team had to redouble their efforts and Sergio Canales and Fekir worked hard to find those gaps between the opposing defense.

The Argentinian Guido Rodríguez or Juanmi were some of those who had their opportunities to shorten the disadvantage, but Alavés remained orderly and also with quick movements to try to surprise again.

Pellegrini removed Joaquín Sánchez and Borja Iglesias from the beginning of the second half for the Mexican Andrés Guardado and Aitor Ruibal to find more offensive resources and thus Betis turned over on the babarroza area, although it was Pellistri who was close to 0-3 in a counter that Joel Robles prevented from ending successfully, as well as shortly after with an attempt from afar from Joselu.

Alavés forgave there and very shortly after Borja Iglesias put the 1-2 by transforming a penalty that Rubén Duarte gave to Fekir, with which, with half an hour ahead, another game was opened in which the Andalusians did not want to lose or a minute in search of the comeback.

A) Yes, Joaquín headed a corner to perfection and made it 2-2 in the 81st minute, the first step for that comeback they sought in the final stretch of the clash against an opponent who was touched by wasting the advantage and sunk when Borja Iglesias, in another magnificent header, achieved his second goal two minutes after the regulation time and put the 3-2 final.

Incidents: Match of the twenty-sixth day of LaLiga Santander played at the Benito Villamarín stadium without an audience. Betis culminated in this meeting, which coincided with International Women’s Day, the program of activities for the eleventh edition of the ‘Betis Women’s Week’, in which the health workers and the most veteran subscribers were the protagonists. A minute’s silence was also observed due to the recent death of Manuel Morillo, a historical utillero from the Betis quarry.