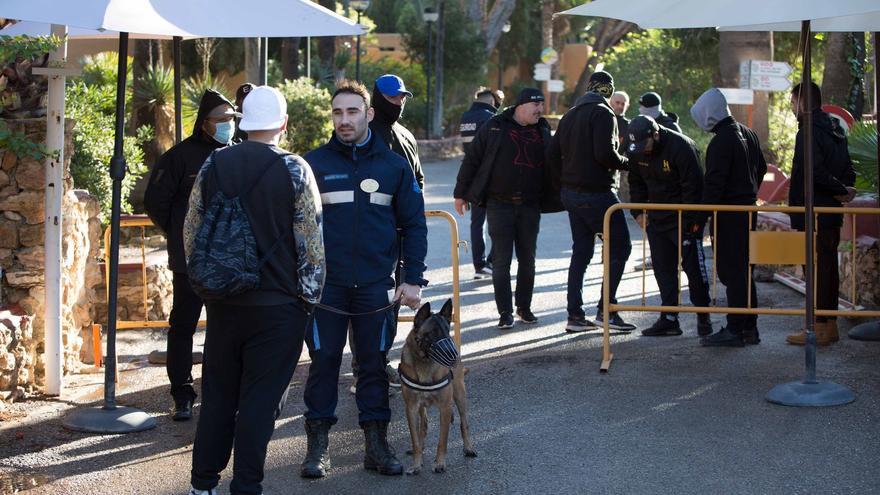 The company Desokupa has installed an access control this morning at the Punta Arabí Club (Ibiza) to prevent the theft of furniture and appliances and prepare the eviction device, scheduled for Thursday. Among the 150 squatters who live in the area, there is “a very violent and organized group of 40 people that was dismantling the entire complex, taking furniture, TVs or vitroceramics”, as the director of Desokupa has warned, Daniel Esteve.

About twenty security guards have been deployed early in the morning to reinforce surveillance and prevent vehicles from entering the venue, in which the famous Punta Arabí market is held during the summer. At the end of the season, the Azuline hotel chain stopped managing the complex, which it had leased in recent years to the businesswoman Paquita Sánchez, and since then the squats massive of tourist apartments.

Desokupa, hired by the new leasing company of the Punta Arabí Club, set up a first surveillance device after the beginning of “the robberies a sack “. While giving his testimony, Esteve shows photographs and videos of the acts of looting, in addition to the license plates of 20 vehicles that have been taking objects. Among them, a Red Cross van” stands out. recorded on several occasions, “he warns.

In addition to squatters, a score of apartment owners still live in the hotel complex “who are completely terrified.” Two days ago, a first control with four auxiliary guards was installed at the entrance of the Punta Arabí Club, who yesterday morning were threatened and intimidated by the violent group of squatters, made up of about 40 people.

“They have been installed in the area of ​​the back of the complex and yesterday they came armed with knives, sticks and dogs, there are many witnesses who will be able to ratify it“, Esteve underlines.” We called the Civil Guard, but now 70% of their troops are on vacation for the extra days they do in summer. But whenever we have unleashed in Santa Eulària, both the Civil Guard and the Local Police have done a formidable job, “he says.

Last night, already with the presence of the Civil Guard, the agents requisitioned “40 fire extinguishers that the squatters had prepared at the door to throw them at us,” he explains while showing the images to corroborate it. “Esteve announces.

For their part, two of the squatters that have settled in the Punta Arabí Club for two months, Sandra Gutiérrez and Ana Rivero, have called this newspaper to state that “the vast majority of the people who live here are families with children. and there are also older peopleThere is no violent here. “” We feel coerced, I don’t have to bear being called homeless in front of my daughter, “they lament.

“We are aware that this is private property, but this was abandoned and we keep it clean and cared for,” they assure. According to what they say, they have seen some vans take things from the Club Hotelero warehouse, “but it was not people who lived here, but they said that Paquita [la propietaria del Club Punta Arabí] I owed them money. “” We are afraid, but we are not going to leave here without a judge’s order because it is our home, “they sentenced.