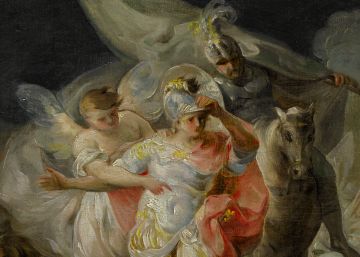 The second sketch of the picture Hannibal winner who for the first time looks at Italy from the Alps, that Francisco de Goya (1746-1828) presented to the contest of the Academy of Fine Arts of Parma, in 1771 – and that he lost to the local Paolo Borroni- has been sold this Wednesday at Sotheby’s New York for 1.6 million euros. The final price has exceeded the estimates of the auction house, which they claimed would not exceed 700,000 euros. It has been acquired by a private collector from New York, city in which since January 2000. That year it was sold in the same room for just over 400,000 euros. On that occasion he left Spain for the first time, with the permission of Board of Qualification, Valuation and Export of Historical Heritage Assets, after belonging to a family in the Basque Country. He has only returned for a temporary exhibition, in 2008, in Zaragoza.

The reason for so much attention may have been that the Sotheby’s catalog ensures that it is Goya’s oldest reference. However, Arturo Ansón, a specialist in Goya and in his formative periods, denies it. In the Museum of Fine Arts of Zaragoza, a sketch prior to the auction is preserved, among other pieces. In the New York note, face features, iconography, attitudes and colors are more detailed and fixed. It’s a sketch prior to the picture but very advanced, which is preserved in the collection of the Selgas-Fagalde Foundation of Asturias after being discovered by Jesús Urrea, in 1993. In the Prado Museum also retains the small pad of notes where the painter studied armor and notes of figures. But, after the defeat in Parma, the painting fell silent.

Goya traveled to Italy, between 1769 and 1771. He had just turned 23 and wanted to return to Spain become a great painter. He saw in the Parma contest the opportunity to return with an award that would open the doors of Madrid, but it could not be. “He got six votes, that is, he did not lose it by a win, but he lost it to a student of the house. They reproached him questions about color, an excuse of bad payer, ”he says on the other side of the phone Ansón, that finalizes a volume on the years of formation of the Aragonese painter for the Queens College of New York. The historian sees the inheritance of the Italian baroque painter Corrado Giaquinto (1703-1765) in this sketch, especially in the allegory of the Po River, that being in the first place that turns its back on the public, “and that it repeats again in other compositions , as in El Coloso. ”

Between success and disappointment

It is not difficult to establish a comparison between Hannibal and Goya in the instant portrayed, a moment in which the Carthaginian general observes the Italian plain and his triumph, while crossing the Alps. The painter goes through his most delicate period on that trip prior to his conquests, when Anton Rafael Mengs (1728-1779) calls him to take care of the tapestry tapestries, in January 1775, four years later. “He came back very disappointed with the defeat. For him to present himself with the prize would have been the culmination of his trip. It would have opened before the doors of the Academy of San Fernando and its success in Madrid. These four years in Zaragoza was a small break in his career, ”explains Ansón.

Both the two sketches and the painting represent a decisive step in Goya’s career. In Rome it is a great painter and is discovered in his highlights, in expressions and in composition. Pink, blue and yellow tones still predominate. Manage the contrasts of light and shadow to highlight the central group around the protagonist. As Nigel Glendinning wrote: “The expression of energy, resolution and yearning or anxiety in the general’s face is very thoughtful.” Surprised as the premature illusionist, they face the dark troop on the left and the group of soldiers on the right. But the effort does not report the benefits and hopes he had put in the picture. “In that Goya there are already notes of modernity. When he returns from Italy he is already an excellent painter and, above all, he has a great capacity to imagine and compose his own models, ”adds Arturo Ansón.