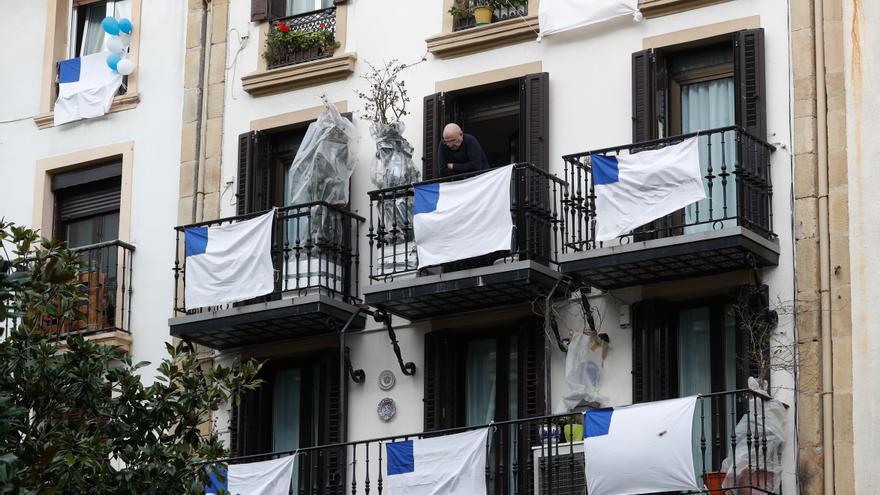 San Sebastián, Jan 20 (EFE) .- Donostiarras live today the saddest day of San Sebastián in many years, with semi-empty and silent streets, despite the fact that they tried last night to “save the party” from the decorated balconies, touching each one in his house his drums and barrels to honor his patron one more year.

After a night of dinners in the houses – not in the gastronomic societies, closed up tight – and of drums on the balconies, the city today spends its big day in silence, without any presence of drumming in the streets and if the colorful and traditional children’s parade that at noon attracts, every January 20, thousands of people in the central streets of the city, today soulless like any winter Sunday.

The silent city looks, however, elegant -it always is-, with facades decorated with Donostia flags, balloons and other white and blue motifs, with which the people of Donostia have had to settle this year of harsh restrictions due to the pandemic of the covid-19.

The marches of maestro Sarriegi never sound before midnight between January 19 and 20, but yesterday they did, because the mayor, Eneko Goia, raised the flag of the city at 9:45 p.m., rushing the limit of the touch of It remains, in an empty Plaza de la Constitución, where there were only informed journalists and a small group of “dissenters” who appeared there to reprimand the mayor, for any of the reasons that people might think to reprimand to a mayor.

The people of San Sebastian did respect the tradition, by making the marches sound at the set time, 24.00 hours, from their balconies, terraces and windows, while on their televisions you could hear the marches recorded in the previous days by some representatives of the tambourines. from the city.

That moment has been the most similar to a party, which each year lasts for 24 hours of music and atmosphere, and which this year has given way to silence and general resignation.

The people of Donostia, yes, have demonstrated their responsibility, since, despite the fact that the Ertzaintza deployed an important device at night in all the city’s neighborhoods, it has hardly had to intervene, since most of the residents have followed the slogan of stay at home.

But not all. Minutes before noon, when the streets have begun to stretch, thanks to the fact that San Sebastián has not entered the red zone and has open bars, a group of seven “insubordinate”, dressed as cooks and equipped with barrels and drums, -and from a powerful loudspeaker – they have animated the center of the city somewhat, until they have run into two patrols of the Municipal Guard.

The police officers have identified them and, looking in the tangle of decrees and provisions in force for a legal precept that prevents drumming in the street while maintaining a safe distance, they decided that they could not do so because there were seven – six adults from the same family and one child – and not six.

Around, division of opinions. From the “they don’t hurt anyone” and “at least they cheer a little”, to those who have been glad that they have not been allowed to continue, “for smart”.

Apart from the tambourines, San Sebastián has not experienced today another of its most traditional acts, the delivery of the Golden Drum, suspended by the pandemic, although the High Mass has been celebrated in the Santa María del Coro basilica, officiated by the Bishop José Ignacio Munilla and with the presence of the mayor.

The people of Donostia, of the few who were able to complete the party in 2020, have resigned themselves to limiting the celebration to the balconies this year, with the hope that in 2022 they will be able to recover the streets.