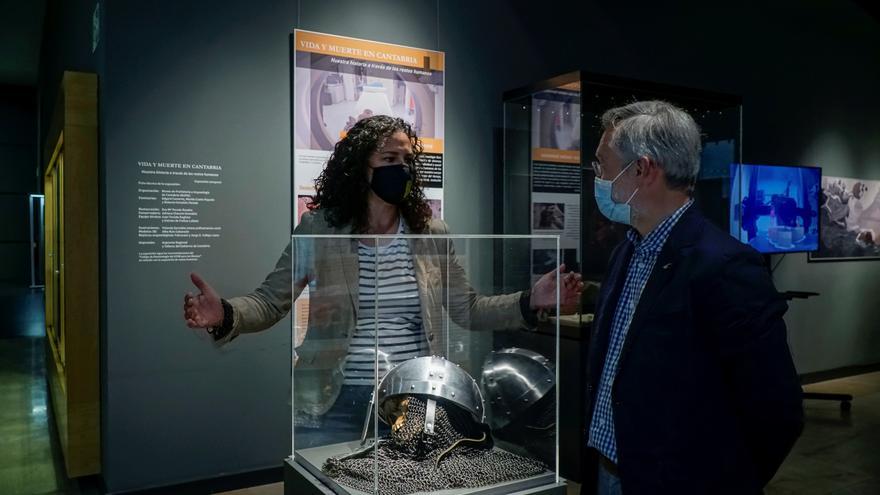 Santander, Jun 11 (EFE) .- The Museum of Prehistory and Archeology of Cantabria (Mupac) will host until the end of this year an exhibition in which 25,000 years of the region's history are reviewed through death, in which They show human remains from different periods or utensils located in burials, among other pieces.

"Life and Death in Cantabria", the only temporary exhibition this year at the Mupac, which opened this Friday, is made up entirely of museum funds, which have been reinforced with descriptive paintings of scenes related to death at different times. and with new technologies when using 3D printers to reproduce pieces that could not be exposed.

The general director of Acción Cultural, Gema Agudo, presented this exhibition at a press conference in which she was accompanied by the director of Mupac, Roberto Ontañon, and by one of the curators of the exhibition, Mariam Cueto.

Ontañón has explained, in statements to Efe, that the philosophy of this exhibition is to show that the museum "not only functions as a container for objects", but also has human remains among its funds, which must be treated with "sensitivity". not so much in the case of prehistoric remains, but of more modern times because they can be ancestors of living people.

In fact, he stressed that in this case the exhibition has been set up following the "philosophy" of the code of ethics of the International Council of Museums (ICOM, acronym in English) to explain the history of Cantabria "not so much about the utensils, but about the own human remains ", which are a fundamental source of information to know how people lived at different times, and also how they died."

"The remains tell us about diseases, diet, food, violent conflicts and also funeral practices. How we have related to death from Paleolithic prehistory to contemporary times", Ontañón has abounded.

In the sample, as detailed, thirteen information panels are combined with some paintings, executed by Yolanda González, a scientific illustrator, which reproduce an assault on a Cantabrian fort and a Paleolithic burial in the Pendo cave recreated from the remains themselves and display cabinets displaying real human remains and 3D reproductions.

The exposed remains range from the Upper Paleolithic, the Gravettian period, about 25,000 years ago, to pieces related to deaths in more contemporary times, such as the Civil War, with letters and photos of a shot. "The temporal scope is that of all humanity that has lived in Cantabria", has specified the director of Mupac.

The medieval period is the one that contributes more vestiges to this sample with an important presence of remains of the Julióbriga necropolis, from which the complete skeleton of a child comes, and also from a more modern stage the vestiges located in the Cathedral of Santander, as explained by the curator of the exhibition, who has emphasized the importance of human remains in archeology. "They inform you of death, but they also inform you of life," summarized Mariam Cueto.