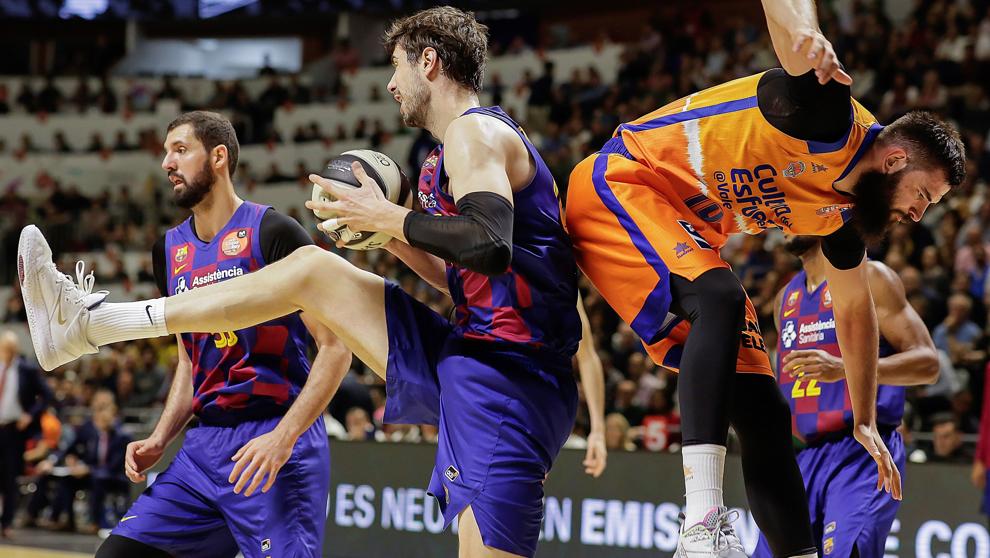 At the first exchange Barça he has taken a monumental hit, unable to defend his title in the Copa del Rey, surpassed from beginning to end by a great Valencia. Ponsarnau’s team shook his pulse again in the final moments but this time the Catalans were absolutely unable to take advantage of it. The pharaonic project of the Palau undergoes its first great blow.

Pesic were a team too erratic in attack, allergic to systems, too dependent on individual success. With 14 of 43 in triples, repeating a new feat before the Valencians ended up being impossible and Barça embarks on the journey back home early. He could not stand the pressure of favoritism, much more comfortable the last two years in the shadow of Real Madrid.

Duels between Barça and Valencia are on their way to becoming the second great Spanish basketball classic at this rate. For the fifth time in just over five months, the faces were seen, this time with the Copa del Rey as the stage and once again had as a common element the maximum equality between both teams, although this time it was face taronja after four consecutive crosses. The five games have been decided by less than 6 points.

The first match of the tournament did not disappoint and left the bar very high for all who must come later. He started sending Barça in the initial minutes of scoring thanks to an extraordinarily inspired Claver from the triple – he went to rest with four without a fault – before a somewhat nervous Valencia at this start of the crash, taking almost four minutes to score his first basket.

Barça was controlling very well the offensive rebound of Ponsarnau, one of Pesic’s great obsessions and his main lack in the last Euroleague duel. But suddenly the Barça team was blocked in attack, as if it had been scared once Valencia landed in the duel, and entered one of those dangerously habitual potholes this season.


A basket of Mirotic placed 18-12 at 3m31s by the end of the first quarter. Barça would not score again until 7m10s later. A ballast perhaps too big in any game and even more in a quarter of the Copa del Rey. In that space of time, between the end of the first quarter and the beginning of the second, Valencia did not miss its opportunity and endorsed a partial 0-20 culminated with a triple of Abalde (18, 32, minute 14) just after time dying dead of Pesic.

Although taronja they ended up going to the locker room with an advantage thanks to a triple of Doornekamp on the horn, Barça had even matched the forces on the scoreboard (38-38) after that disastrous partial and kept intact their options to access the semifinals.

But the second half of the Pesic team is one of those that should invite all the rectors of the Palau to reflect in depth, including those who step on the parquet floor. Beyond some flashes of Mirotic, which ended with 25 points, Barça was much lower than Valencia, as if it were the minor team of the game, an unforgivable image for a giant like Barça.


Between Dubljevic and Tobey they caused a hole of cosmic dimensions in the Barca area and little by little they widened the score again in favor of their team after a second disconnection of their rival transformed into another 0-14 partial after two free throws of Doornekamp (52-64, minute 29). The only Barça response was individual plays, often poorly selected outside shots and gave the feeling that Barça trusted a new miracle like that of a week ago in La Fonteta.

But this time, although Valencia’s wrist shrunk every time the stopwatch was getting closer to the end, Barça proved completely incapable, worrying about the poor success in the shot. The play that best summed up the afternoon came three minutes to the end, with 69-76 in the light. The azulgrana threw four triples without opposition in the same play thanks to the work of Oriola under the hoop but none even approached to kiss the net. They were denied and there were no alternatives.

Barça was entrusted to a final carambola, with 1.8 seconds left, with the free throw that Higgins missed (78-80) relying on an offensive rebound that never came. Malaga smiled this time at Valencia and denied the smile to the Catalans, who had always reached the final on the Costa del Sol (2001, 2007 and 2014). A period of reflection opens in Barcelona. Unforgivable your goodbye to this Cup.

Timetable and where to see Liverpool -West Ham – La Provincia

Marcelo, accused of driving without points and exceeding the speed limit