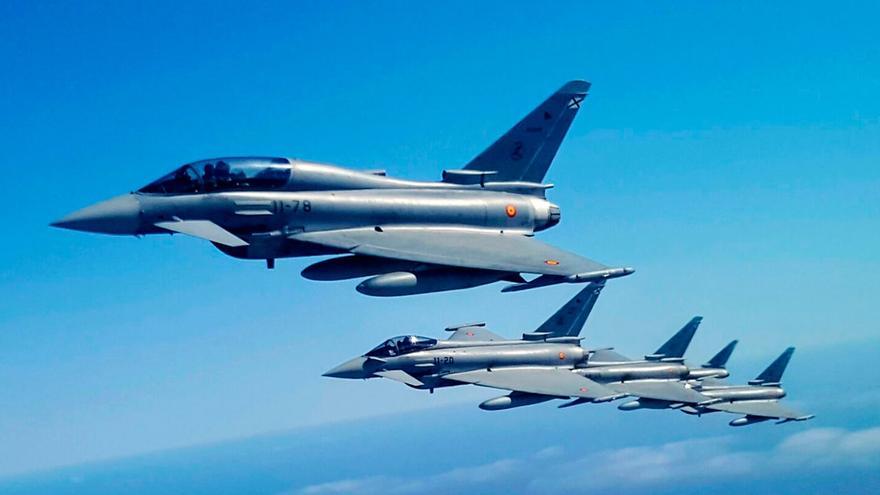 The military industry in Europe has an annual carbon footprint equivalent to the emissions of at least 14 million cars. This is what the study affirms Under the radar. The carbon footprint of the European military sectors, conducted by Stuart Parkinson, Group CEO Scientists for Global Responsibility (SGR) and Linsey Cottrell, Head of Environmental Policy at CEOBS, and published this Tuesday by the group of The Left in the European Parliament (GUE (NGL). According to the authors, the figure they have reached is a “very conservative estimate, equivalent to the total emissions of vehicles in Portugal, Greece and Norway Combined “.

France contributes a third of the total carbon footprint of the EU’s armies, according to the report. Spain is one of the six main EU countries in military spending and made some commitments on the notification of emissions within the framework of the IPCC (Intergovernmental Group of Experts on Climate Change).

For example, France qualifies the fuel consumption of military activities as “confidential”. The Spanish Defense Ministry said in 2012 that it is recording the carbon footprint of its activities, but the authors say they have not been able to “find them published or registered.” The study also analyzes “the emissions of Spanish arms companies such as Navantia and Indra”. The total greenhouse gas emissions of the entire military sector in Spain is estimated at 2,794 kilotonnes of CO2.

“The European Green Deal completely and deliberately ignored everything that had to do with the climate impact of militarization,” the report states. “This is not an oversight. It is part of the EU narrative to entrench exceptionalism around the military and arms industry, to portray them as inherently necessary and untouchable, when in fact they contribute significantly to the climate crisis and must be addressed. Demilitarization must be part of any credible Green Deal. ”

The research also highlights that Europe is home to eight of the 30 largest corporations in the world by military sales; identifies that the French armed forces contribute to one third of the total carbon footprint of the EU armies; and estimates that Poland’s military technology industry has the highest greenhouse gas emissions.

Gaps in the Spanish data

The section dedicated to Spain in the report includes registered greenhouse effect data and the researchers’ estimate. Military spending for Spain is summarized in the figures communicated to NATO: it increased by 29% between 2014 and 2020, from 0.93% of GDP to 1.16%. As with other countries in the study, its military spending has increased markedly in recent years in response to NATO objectives – commitment in NATO is 2% of GDP. Spain has troops outside its borders, in the Middle East, Africa and other parts of Europe.

The National Integrated Energy and Climate Plan of Spain does not make specific reference to the armed forces, but it does say, however, that although the Energy Efficiency directive excludes certain buildings owned by the armed forces, the Ministry of Defense has developed a system energy and asset management (SINFRADEF) that contains information on energy consumption and efficiency of all its buildings.

Although the previous national action plan for 2017-2020 stated that the information is not included in the inventory for security reasons, the data is collected and can be used. The action plan also noted that the energy performance criteria of the European directive do not apply to contracts for the supply of military equipment.

The Ministry of Defense has also developed the Defense Technology and Innovation Strategy (ETID), which sets specific goals to support collaboration between national and international technology providers, including energy and performance management systems. In 2011, the Secretary of State for Defense established a commitment to the implementation of environmental sustainability and energy efficiency, including the publication of an accountability report on its strategy and social, economic and environmental policy, as well as the establishment of a protocol for calculating your carbon footprint.

The website of the Ministry of Defense indicates that in 2012 it began to calculate its carbon footprint, including direct emissions from the consumption of fossil fuels, indirect emissions from the use of electricity and indirect emissions produced by its suppliers of goods and services. The website also cites the importance of including environmental clauses in bids for ministry contracts. “But we have not been able to locate a copy of the carbon footprint data or a liability report on the website of the Ministry of Defense,” the report says.

Many of the main foreign corporations that manufacture military technologies in Spain publish detailed data on their greenhouse gas emissions. Using data from Airbus, Navantia, Indra, Thales and ITP Aero, the proportion of their military sales and the proportion of employees based in Spain, the report has calculated both the total greenhouse gas emissions from its operations based in Spain as the figures for emissions per employee. And these data show Airbus with the highest emissions related to the military field in Spain.

The figures indicate that the Spanish military technology industry has the lowest level of emissions per employee of the six countries in the study. This is likely due to the use of renewable energy sources. For example, at the Spanish facilities owned by ITP Aero, 100% of its electricity now comes from renewable sources, while at Indra the figure is 75%. In any case, “the figures seem surprisingly low compared to other countries”, the authors state: “It must be taken into account that some of the main military technology companies operating in Spain do not publish data on their greenhouse gas emissions. greenhouse, such as Aernnova and EXPAL “.

Thus, the weighted average of emissions per employee has been used as the basis for an estimate for the military technology sector in Spain as a whole. By multiplying this by the number of employees in the sector, the total emissions are calculated to be approximately 83,000 tons of CO2 equivalent (tCO2e). This is the lowest figure among the six studied, as the industry is relatively small and the intensity of greenhouse gases is comparatively low.

Podemos MEP Idoia Villanueva, head of the party’s International, has asked the European Commission to reconsider its defense policy: “This study shows that the fight against climate change and the investments of military Europe are incompatible. While this Commission Europe raises the Green Deal flag, many activities that harm the environment and hinder our climate action are hidden. In addition, it is important to focus on the lack of transparency. National security can no longer be an excuse to hide data of the effects that the military industry has on the environment. Beyond tinting military policy green, it is necessary that we redesign the defense policy of the European Union, betting on arms control and disarmament, putting security human in the center. ”

The study also gives an estimate of the sector’s carbon footprint. This estimate uses data from Thales, which has calculated the carbon footprint of its entire corporation. Although this company is based in France, some of its operations are located in Spain, and the authors of the report consider that their figures are indicative of the Spanish military technology industry as a whole.

To calculate the territorial emissions (based on production) of the Spanish military sectors, taking into account the main data gaps, the authors assume that the Spanish military bases are somewhere between the situations in France and Germany. Adding the scope emissions from the military technology industry, together with an estimate of other emissions within the country’s supply chain, yields an estimate of 1.1 million tCO2e. “This estimate must be assumed to be conservative, as it is based on armed forces figures submitted to the United Nations Framework Convention on Climate Change, which tend to be underestimated,” the report says.

For the carbon footprint (consumption-based emissions), the study used a scale factor based on a UK military life cycle assessment to give an estimate of indirect emissions and therefore a grand total. . Therefore, it is estimated that the carbon footprint of the Spanish military is approximately 2.8 million tCO2e.