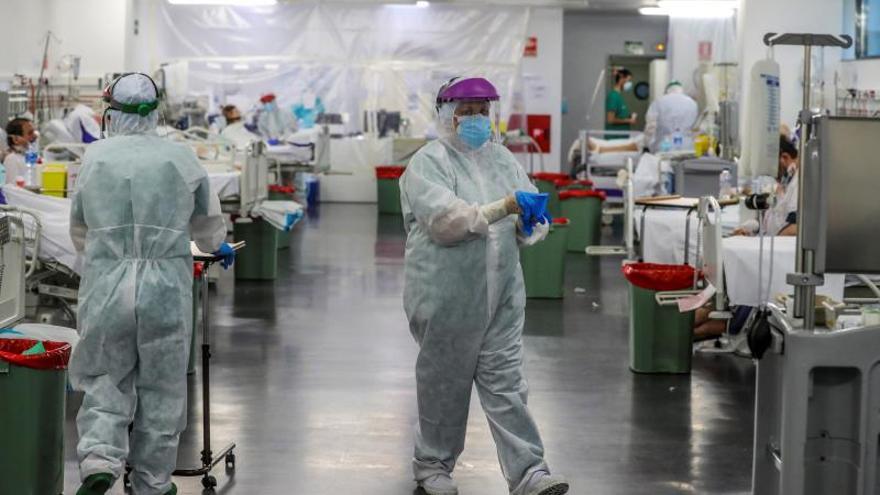 The coronavirus entered Spain and began to spread silently and quickly long before it was detected. We lived with him without knowing it until after the first identified cases, the epidemic broke out uncontrollably in early March. Now, researchers from the Carlos III Health Institute are trying to find out what were the factors that triggered it and why the uneven expansion between territories. The still preliminary results of the COVID-19 Dissemination Factors Project in Spain They conclude that internal mobility, trips from Madrid and the Basque Country to other territories, places in nursing homes and the percentage of infected toilets are the statistically significant variables that explain the rise in the curve, although with a different incidence in each of the the communities.

The study carried out by the National Center for Epidemiology (CNE) and the CIBER for Epidemiology and Public Health (CIBERESP) will also analyze the period of decrease in cases and the current wave of outbreaks, 281 according to the latest Health data. But in this first approach, it has examined the daily cases included in the National Network of Epidemiological Surveillance (RENAVE) up to its maximum peak – on March 20 for the whole of Spain – and different types of factors, of which they analyze their correlation with the curve increase. Among them, the population, the rate of residential places per 100 over 70 years, the flow of passengers, the density of roads and railways or the general state of health of the population …

Then, using a statistical model, he obtained the five most determining factors in the evolution of the rate of infection and estimated the average effect of each one. According to Rebeca Ramis and Diana Gómez, principal investigators of the work, the objective is that the findings “help to understand the diffusion and speed of the expansion of the pandemic” so that “they can help when making future decisions and to know the disease ” Thus, they have calculated that at the national level the increase of a place in residences, hard hit by COVID-19 With thousands of deaths across the country, for every hundred inhabitants over the age of 70, the risk of coronavirus increased by 17%. In other words, the communities with the most places of residence per inhabitant of that age bore more risk. On the other hand, a 10% increase in infected healthcare personnel increased the risk by 6%.

Influence of diffusion factors of COVID-19 in communities

Source: Ministries of Health, Transport and Science and Innovation

Regarding mobility, the study uses the so-called “infectious risk of internal and external mobility”, which results from crossing the movement data of the Ministry of Transport with the ‘rate R0’, which measures the average of infections caused by a primary case. The displacements within each autonomous community have been evaluated, as well as those of Madrid and the Basque Country towards the rest of the territories, as these are the two “in which community transmission was previously detected” of the virus, the analysis cites. In this way, the conclusions point out that a growth in internal mobility of 10% represents an increase in risk of 9% and between 4% and 7% in the case of external mobility from Madrid and the Basque Country.

Ramis and Gómez point out that this factor “has had a relevant weight in the incidence of the disease”, as have the places in residences or the proportion of infected toilets. The explanation must be sought in the great vulnerability to the virus presented by people over 70 years of age, with a higher death rate and more serious clinical conditions, and “the lack of containment in the socio-sanitary field”, that is, in nursing homes and hospitals or health centers. Before the collapse of health centers, in some communities such as Madrid or Castilla y León they were approved wild triage protocols that blocked the health care of the elderly from nursing homes.

At the same time, infected doctors, assistants or nurses already account for 20% of all positives, but it has been a “very high” number, according to the study, since the beginning of the epidemic. So its influence is associated with two reasons: the large number of infections can directly increase the total number of cases and, on the other hand, they have been “one more link in the chain of transmission”, especially “in the early days of the epidemic, when strict protection and hygiene measures were not implemented. ” The lack of protective equipment has been one of the greatest demands from professionals, schools and unions during the emergency, and not only when the virus had not yet been detected, but at its worst moment.

The analysis has also been done by communities, which has allowed the authors to group those that have experienced a similar impact of the factors. Madrid and Catalonia form one of these groups. The specialists had already pointed out that in both territories, one of the most affected by the pandemic, the cocktail of mobility and population density had been explosive and this is confirmed by the ISCIII: the main factor that explains how the curve soared was displacement inmates, followed by the percentage of infected toilets. The following group is formed by Castilla-La Mancha, Castilla y León, Comunidad Valenciana, Navarra and Galicia, where the number of infections among health professionals and residential places have more weight; lastly, the rest are included in a third group, where the effects of the variables have not been so high.

However, it is an approximation because there are differences between some territories and others: in Castilla-La Mancha, for example, the impact of the infected toilets was very significant, just as in Galicia or the Valencian Community, while in Castilla and León, the clearest factor was the number of places in nursing homes. According to this model, these centers were also very determining for the contagion curve to skyrocket in Aragon or Extremadura, but not so much in the Community of Madrid, where 18% of users died from March to May. Ramis and Gómez explain that in the region the five factors were “important” and, although the weight of each one varies, “all are significant”. However, they warn that the study focuses on confirmed cases declared to RENAVE and not on deaths.

As for the risk that mobility from Madrid or the Basque Country could pose to the rest of the autonomous regions, the results of Aragón and La Rioja stand out, which were quite influenced by movements from the Basque community. On the other hand, travel from Madrid was not the most influential variable in any of the 17 communities, but it was an important trigger. In fact, the seroprevalence study showed that the territories surrounding the Community of Madrid (Cuenca, Guadalajara or Segovia) were some of those with the highest percentage of people who had passed the disease, with rates above the national average.

This is how the curve rose in each Autonomous Community

The study also reveals the so-called pandemic trigger rate in each territory, that is, the exact day in which the number of cases exceeded the threshold of 5 per 100,000 inhabitants. There begins the period of ascent of the curve, which reaches the maximum peak of infections. In Spain, the fork goes from March 8 to 20 of the same month, but there is great variability between communities because the rhythm was different in each one: Madrid was the first to reach the firing rate, on February 24, followed from La Rioja and the Basque Country, where he arrived on February 27 and 29 respectively. The three territories were the scene of the first outbreaks of infection detected. In Valdemoro and Torrejón, in the case of Madrid, and in Vitoria following a funeral which was also attended by residents of Haro, in La Rioja, one of the first towns in quarantine. In contrast, the places he later arrived at were Asturias, Galicia, Murcia, Ceuta and Melilla.

It is also heterogeneous the moment in which each one reached the maximum peak, that is, the day in which the largest number of cases was reported and from there the curve began to decrease once the general population confinement was implemented from the March 15, with the declaration of the state of alarm. Asturias, the Canary Islands and Melilla were the three territories in which this period of ascent of cases lasted less (eight, ten and six days respectively) and the last to leave this phase behind were Ceuta, Extremadura and Aragón. However, the places that experienced the ascent of the positive curve the longest were La Rioja, which came to be in this situation for 22 days, Madrid (21), and Euskadi and Ceuta, where they reached 20. The stabilization day of the cases, before the arrival of the current sprouts, it is located between the end of April and the beginning of May, the first being the Canary Islands, on April 20, and the last Extremadura, on May 10.

We are dedicated to covering the coronavirus epidemic and its consequences. If you like our work, support us. Our independence is possible thanks to the commitment of more than 55,000 members who pay to be free.