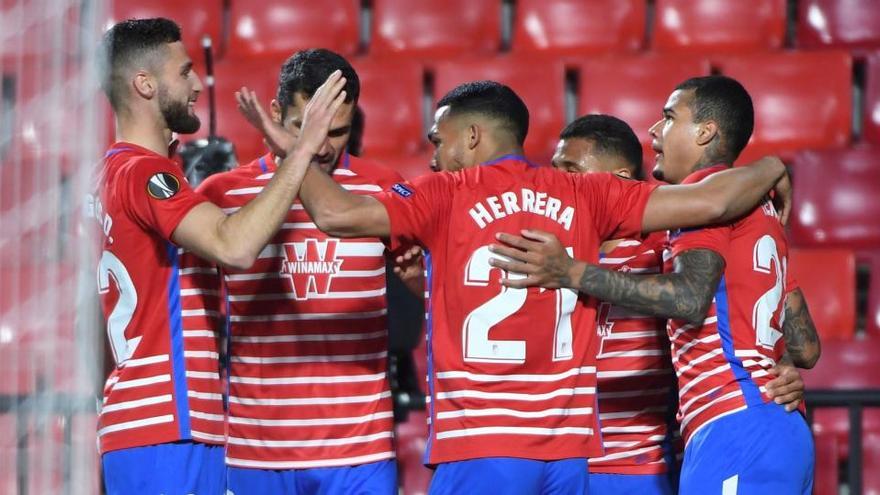 The grenade I take one important advantage against Italian Naples in the knockout stages of the Europa League at the beat this Thursday 2-0 at the Nuevo Los Cármenes Stadium in the first leg.

The goals scored by the Venezuelan Yangel Herrera and the Brazilian Robert Kenedy, in just two minutes in the first quarter of the game, allowed a remarkable Granada live on the rents in the second half before a disappointing Naples that created very little danger.

Granada commanded the game in the first minutes, with a good personal move by Kenedy, very active from the beginning, who Jorge Molina did not complete in goal. Another action by the right wing of the rojiblanco attack, this time by Frenchman Dimitri Foulquier, was about to become a goal after a quarter of an hour, but was avoided by the Italian goalkeeper Alex Meret.

The Andalusian domain became two goals in a row in just two minutes just before the equator of the first half, the 1-0 scored by Yangel Herrera after a perfect center from Kenedy, and the second signed by Kenedy himself at the end of a great counter, very well led by Venezuelan Darwin Machís.

Napoli were down 2-0 in the blink of an eye, and tried to react after a beginning in which he was hesitant and erratic, although neither the distant shot of the Macedonian Eljif Elmas nor the center kick of the Portuguese Mario Rui found goal.

Granada's speed did a lot of damage against Italians' turnovers in the midfield, and in another local counterattack Jorge Molina was very close to increasing the advantage with a spur shot. Nigerian Victor Osinhen, already in added time, signed the last arrival before the break of a Naples that did not shoot in the first half between the three posts of the goal defended by the Portuguese Rui Silva.

The Italian team controlled the ball more in the second half against a Granada always well established on the field and that he did not renounce possession with a masterful Ángel Montoro as the leader of his own. Pole's Piotr Zielinski fired at the hour of play from a good position to score, but his crosshairs were deflected, as did Lorenzo Insigne shortly after on a direct free kick.

The clearest opportunity for Naples, more and more overturned as the minutes passed, came from set pieces with a header from Serbian Nikola Maksimovic from the small area that went off. Granada replied, which held up well against the Neapolitans, with a distant kick from Montoro that also went wide and with a well-closed counter by Antonio Puertas with a shot that Maksimovic rejected.

Rui Silva's first and only stop in the game came in the 86th minute after a shot from Osinhen. Despite the visitor push the clash ended with two clear chances for Granada, which brushed 3-0 with a shot from Yangel Herrera against which Meret stood out and, shortly after, with a header off Jorge Molina.

Incidents: First leg of the Europa League round of 32 played at the Nuevo Los Cármenes Stadium in Granada behind closed doors.