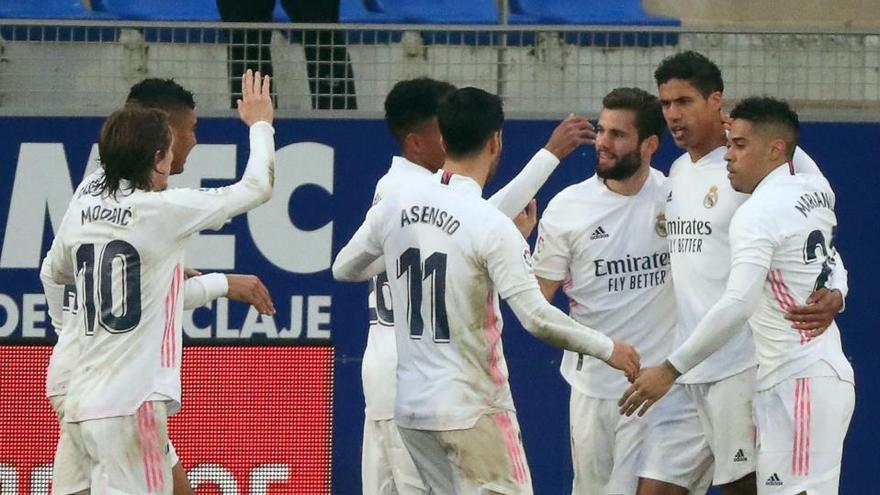 The Real Madrid should confirm the initiated reaction with his comeback in El Alcoraz before him Huesca, close the irregularity of results at the beginning of the year, in a duel against Getafe that faces low minimums, with the fair players of the first team to be able to form an eleven and a plague of casualties that leaves Zinedine Zidane without choice options .

The outlook is bleak for Zidane, who only has eleven outfield players from the first squad. His problems grow on the right side and the center of the field. Forced to tweak his system or change players position.

He does not recover any of the footballers who are one step away from returning to the team. Neither Dani Carvajal nor Lucas Vázquez will be able to solve the hole on the right wing after the muscular mishap suffered by Alvaro Odriozola in Huesca. The Madrid coach must change sides to Ferland Mendy and enter the Brazilian Marcelo on the left or go to defense of three with the French, Raphael Varane and Nacho Fernández.

Worst situation found in a midfield that loses Toni Kroos due to accumulation of cards and after letting Martin Odegaard out at the winter market. Only Brazilian Casemiro and Luka Modric are in good condition. Isco, recovered at forced marches from back problems, tested himself in the last session and is the only player Zidane has recovered. If he plays, the offensive trident can be maintained, but if he cannot start the game, the French coach will have to bet on 1-4-4-2, introducing Mariano Díaz in attack, with Marco Asensio and Vinicius on the wings.

Along the way they stay with Carvajal, Lucas, Odriozola and Kroos, players like Sergio Ramos, the Uruguayan Fede Valverde, Eden Hazard and the Brazilians Militao and Rodrygo Goes. The injury streak doesn’t stop at the White House.

As it is, you must perform with those who are. Footballers whom Zidane praised on the eve in a message of confidence and with a good handful of homegrown players in the call. Some will have minutes in the second half to extend a positive line in a derby that usually brings good news for Real Madrid. More than eight years without being defeated and eleven consecutive leagues beating Getafe at home. You need to repeat it to keep fighting.

Getafe faces this match after conceding on the last day a win against Sevilla, in a match in which they were Togolese central defender Djené Dakonam and coach José Bordalás have been sent off.

The Azulón coach is concerned about the performance that his team has been offering in the last three days, in which he drew against Alavés, suffered two defeats with thrashed paths against Athletic and Sevilla and accumulates 269 minutes without scoring a goal.

The effect caused by the arrival in the winter market of the Japanese midfielder Take Kubo and the Catalan midfielder Carlos Aleñá, who revitalized the team against Elche and Huesca and they gave him a fresh air that improved the offensive performance of the squad, it seems that it has been diluted.

Those two footballers are likely to continue to stay in an eleven that the Colombian could return to. ‘Cucho’ Hernández, who has already overcome some muscular discomfort and will dispute the ownership to Jaime Mata.

In defense, it is also likely that there will be news with the return to the center of the Uruguayan rear, Erick Cabaco, after overcoming an injury, and also from Uruguayan Mauro Arambarri, sanctioned last day and that he will return to the core with Serbian Nemanja Maksimovic.

The key: the reaction capacity of both teams to the doubts shown at the start of the year and the conditions with which they face the duel.

The data: Getafe have not beaten Real Madrid at home since February 24, 2008. They were defeated in their last eleven visits to the Santiago Bernabéu.

– Zidane: “It is a complicated situation because we have many casualties but there are no excuses.”

– Bordalás: “A draw against Real Madrid is always a good result.”

The environment: problems surround the day-to-day life of a Real Madrid that wants a victory to change the dynamics while waiting to recover troops; Getafe, after their last game against Sevilla, were again criticized for their style of play, which the Andalusian team described as “tough”.