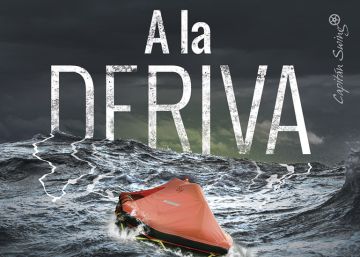 Steven Callahan never imagined that the adventure book he discovered as a young man would lead him to live a dramatic and extreme experience that would become, in turn, another great exponent of this literary genre. In 1982, almost two decades after reading Robert Manry's experience crossing the Atlantic in 78 days on a ship that did not reach four meters in length, Callahan will be in the Atlantic aboard his ship Napoleon Solo. He had built it himself. I knew every nail in the boat. I wanted to emulate Manry. No insurer dared to support the expedition.

At 22:30 on February 4, 1982, in front of the Canary Islands, a storm broke out. A cracking wood sound breaks Callahan's mood, which in a few seconds meets the water at waist level. The boat loses speed and turns towards the bottom of the ocean. He manages to launch the rescue boat into the sea. Feel panic The cold hurts. He doesn't know it yet, but he has two and a half months left at the mercy of the sea. Adrift (Captain Swing) is the book he remembers everything that happened in those 76 days lost in the Atlantic.

Before leaving, Callahan had written in his notebook: “I wish I could describe the feeling of being in the open sea; the anguish, frustration and fear, the beauty that accompanies the ever-threatening spectacle of the ocean, the spiritual communion with the creatures in whose domains I sail. Life acquires a magnificent intensity when we do not have control, but only react, live and survive. (...) On the waves of the ocean I notice my insignificance and that of all men and a humility that I live as a wonderful feeling takes over me. ” It seems as if the gods of the sea had decided to take sides in that personal story that began with a children's reading.