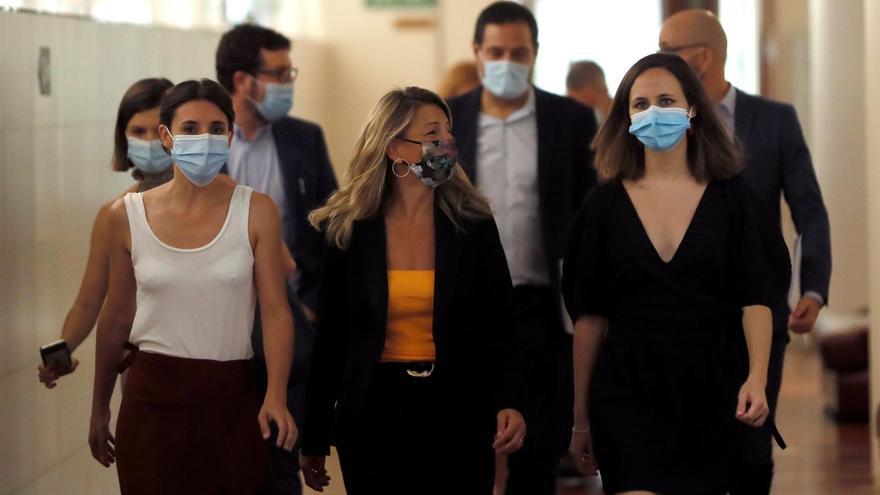 Yolanda Díaz finalizes her presence in the United We Can campaign in Castilla y León, the first she faces as leader of the coalition. The second vice president and her team have so far scheduled a single act, together with the candidate, Pablo Fernández, and her presence at the campaign closing rally on Friday, February 11, together with the ministers Alberto Garzón, Irene Montero and Ione Belarra, who if they have confirmed their attendance, it is in the air pending the Government's agenda.

The place and date of Díaz's rally will be finalized in the next few hours, as confirmed by sources familiar with the campaign plan.

Pablo Iglesias has scheduled two acts in the form of dialogues with the candidate, but not will rally, for the first time in the history of Podemos. The founder and former leader of the organization will participate in two sectoral debates together with the headliner, Pablo Fernández, in which topics such as hoaxes and fake news will be addressed.

The first event will be held this Saturday in Valladolid and María Sánchez, number two for Valladolid and municipal councilor of IU, will also be present. To close the campaign, from the organization team they are squaring the act in which the ministers of Podemos and Izquierda Unida will participate; Ione Belarra, Irene Montero and Alberto Garzón.

In recent weeks, the leaders of the coalition had demanded the presence of Díaz in the campaign, while the second vice president reserved a discreet role in an election that caught United We Can in a moment of transition, without the project having yet materialized that Díaz is preparing for the 2023 general elections. That "listening process" to launch a project that aims to overcome United We Can by adding more civil society actors had barely begun when last December Alfonso Fernández Mañueco pressed the advance election button.

So the vice president's team worked on a discreet role for the leader of the coalition that does not imply leaving the United We Can candidate alone, at a time when the brand is trading down, and at the same time does not convey the idea that Diaz is the one who goes to the polls.

The polls forecast that the result of UP can oscillate between one and three prosecutors. From the coalition they seek to improve the results of 2019, when Podemos obtained two attorneys and IU was left out of the regional parliament. Although internally there is uncertainty about the electoral consequences that the big farm controversy, which for some has put the space in a campaign where a priori it was not going to have a relevant role. With the presence of Díaz, from the coalition they seek to take advantage of the pull of the vice president, currently the most valued political leader (4.82), ahead of Pedro Sánchez (4.34), according to the CIS data published this Thursday.

For the first time, Izquierda Unida and Podemos will present themselves jointly in Castilla y León. This scenario of unity, and the fact that there are not two or more lists in the United We Can space, has facilitated the presence of the second vice president in Castilla y León.

The intense agenda of the vice president, who has been in quarantine for two days after being infected by Covid, will be complicated during the campaign, which will coincide with the last days of parliamentary negotiations to carry out the validation of the labor reform in Congress, a procedure still to be cleared up, since the investiture partners do not guarantee their parliamentary support because they consider that the content is insufficient. That labor reform in which Díaz was involved from the first moment and that cost him some clashes within the Government is one of the guarantees with which he wants to shield his political project as one of the great agreements that he has promoted since he was in charge of the ministry.

Díaz has intensified his agenda with relevant international personalities, such as the meeting held last week with the French economist Thomas Pikkety or the visit to the Vatican, where he met with Pope Francis.

The launch of the campaign in Castilla y León, which took place this Saturday in Valladolid, was led by the general secretaries of Podemos and the PCE, Ione Belarra and Enrique Santiago, and the coordinator of Alianza Verde, Juantxo López de Uralde. In his speech, the Minister of Social Rights claimed that United We Can is the authentic alternative for these elections in Castilla y León to continue with the process of change in Spain, against the claim of the PP and PSOE to return to "bipartisanship. And claimed the figure of his government colleague, whom he described as the "best labor minister in the country who has taken advances in social rights further than ever".