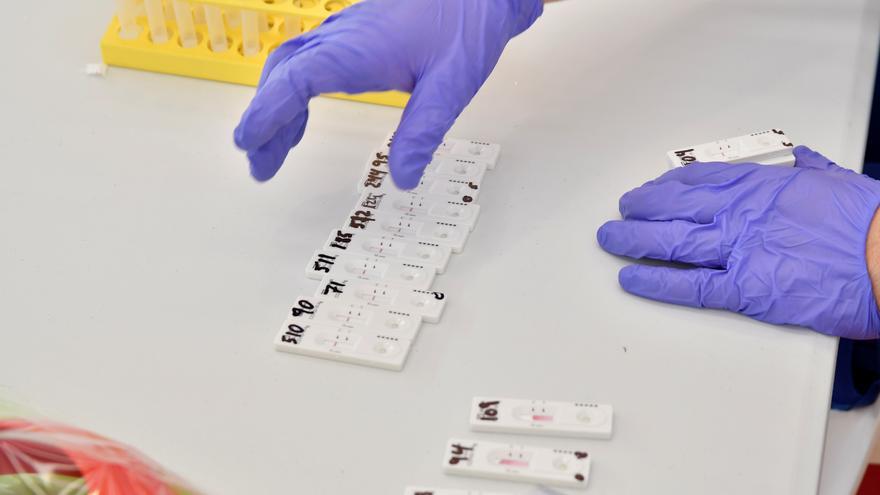 “No antibody test is used to determine if there is an active infection and they also have lower precision. They are useful in population estimates, not to make decisions at the individual level,” recalled last week the director of the Carlos III Health Institute Raquel Yotti during the presentation of the fourth round of the ENE-COVID seroprevalence study.

His words were a veiled reference to the rapid antibody tests that since the beginning of December They are found in pharmacies throughout Spain under a prescription. This, despite the fact that organizations such as the WHO recommend its use “for research purposes only“such as that of seroprevalence studies aimed at determining what percentage of the population has been in contact with SARS-CoV-2.

The warning was not new. The Spanish Society of Infectious Diseases and Clinical Microbiology (SEIMC) I had already released a statement at the end of November in which it was positioned against its use. “Antibody detection tests are not useful, and therefore should not be used, to diagnose active SARS-CoV-2 infection,” they warned. “These tests have a very limited use (if they have any) in the evaluation of active infection, despite the fact that for this purpose they are being applied erroneously in some autonomous communities and in other areas”, wrote the expert in diagnostic tests from the Miguel Hernández Blanca Lumbreras University in The Conversation . “In addition, they have important limitations, especially those related to the presence of false positive results due to their cross reaction with other viruses.”

The list of societies, organizations and experts who have taken a position against the general use of rapid antibody tests is so long that it would be difficult to include it in full in this article. “They do not constitute a conclusive diagnostic method and have great difficulty to be interpreted”, explained the College of Physicians of Cáceres, who feared they could “induce a sense of false security in those who perform them.”

The Basque Society of Family and Community Medicine He directly recommended not prescribing them. Among his reasons, he explained that two things can happen if we do this test: “If we get negative, we are where we were (mask, distance and hand washing); if we get positive, we will not know if we are infected or cured.”

Past infection is not the same as present

Despite this massive rejection, the rapid antibody tests were approved for sale in pharmacies in early December, with a prescription, and marketed under the misleading name of ‘self-test’. Many professionals showed their confusion and anger. “The information that reaches the public is that it detects the disease and that seems dangerous to me,” Lumbreras assures elDiario.es.

“If they sell them as a ‘self-diagnostic test’ you think you do it and see if you have it [el coronavirus], And it is not like that. It is to see if you have been in contact, not to diagnose the disease “, insists Lumbreras. To all this we must add that they have” brutal false positives and negatives. “It is dangerous because it is being confused with another debate that is the antigen tests, which are also self-administered “, clarifies epidemiologist Pedro Gullón. In fact, he assures that that same day he heard how both terms were confused on television when giving the news.

Lumbreras believes that the information that has reached the population ahead of Christmas is “very confusing” and is “very afraid” that people will resort to rapid antibody tests to go to family gatherings. “We don’t know if having antibodies protects you, not from having the virus, but from spreading it, which is the most dangerous thing at this time.”

“There have been two booms with antibody tests: one in the de-escalation when people wanted to know if they were immune to do what they wanted and now, they are in the pharmacy, as substitutes for an antigen test or PCR to detect active infection “, he explains Gullón “This has led to a very clear positioning because it can lead to very wrong individual decisions,” he says, and assures that he does not understand why its commercialization was allowed.

All this led to the Alerts and Preparedness and Response Plans Presentation to position itself for the first time and agree to its “non-use“. Sources familiar with how the decision was handled assure elDiario.es that there was great fear that these antibody tests would be used as a safe-conduct to hold Christmas meetings with a false sense of security, as Lumbreras feared.

However, the confusion of calling products that are not used to diagnose “self-diagnosis tests” continued when the Minister of Health Salvador Illa called them that during the press conference in which The “de-recommended” after a decision “unanimous“He was referring, of course, to the rapid antibody tests available in pharmacies.

What to do if I want an antibody test?

Lumbreras claims not to agree with the general use of antibody tests, since they do not serve to see if the infection is present or not. That is why he believes that the only controversy with these products is: “Why do you want to do it?”

“[Los test rápidos de anticuerpos] they do not give information about what is happening with that person at that moment, “explains Gullón. Even if it tests positive,” the person has already been transmitting the virus for some time or may have stopped doing so, so they have very little use in the face of to make a clinical decision. ”

Gullón if he believes that ELISAs – which also detect antibodies, are not fast but are very reliable – may be justified “in people who are believed to have passed COVID-19 to avoid quarantine” if they come into close contact with an infected person. “There was a moment before the second wave that many Autonomous Communities introduced it for close contacts: if they had IgG antibodies they did not have to continue doing the quarantine.”

A separate issue is the possible use of antigen tests in pharmacy, still subject to debate, but that Lumbreras does defend putting on the table “in certain areas” to detect ongoing infections. They are not without limitations and risks, but they could be offset by proper communication.