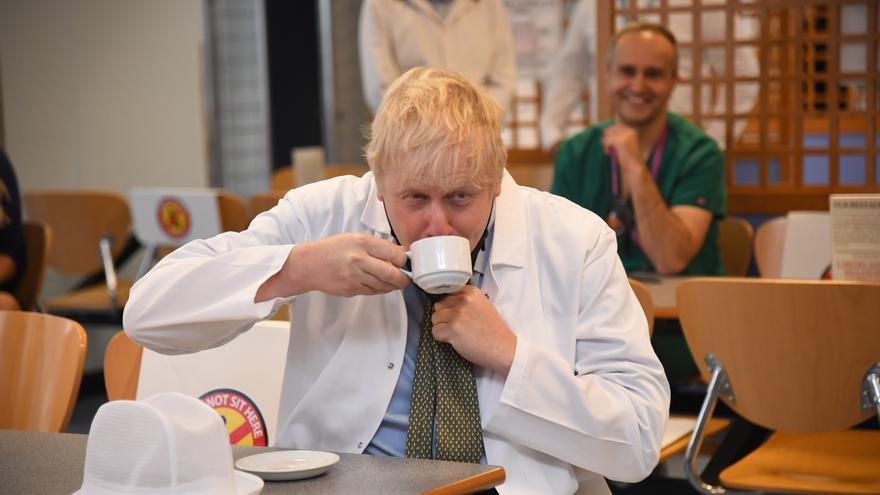 The outbreak of the pandemic forced face-to-face meetings to stop in spring. Even the EU’s chief negotiator, Michel Barnier, tested positive. The videoconference format dragged on for months, until both parties realized that the only way forward could be with face-to-face meetings where papers and notes could be exchanged. But even so, the main issues in contention have not finished being closed. There are only six weeks left until the United Kingdom makes its exit from the European Union effective and, to this day, there is still no agreement on the future relationship between London and the EU.

And just now, when time is running out, a positive among Barnier’s negotiating team has forced the negotiations to be interrupted this Thursday.

“One of my team negotiators has tested positive for COVID-19. With David Frost [el negociador jefe británico] we have decided to suspend negotiations at our level for a short period. The teams will continue their work in full compliance with the guidelines, “said Barnier.

“I am in close contact with Michel Barnier,” said Frost: “The health of our teams comes first.”

“The Commission has informed us that an official in their delegation has tested positive for COVID-19,” said a British Government spokesman: “We are discussing the implications for the negotiations with them. We have been and will continue to act in accordance with public health guidelines to ensure the health and well-being of our teams. ”

After last week the negotiations took place in London, this Monday they had resumed in Brussels. “I and our team have been in talks almost every day since October 22,” Frost said upon arrival: “We are working to reach an agreement, but the only possible is one that is compatible with our sovereignty and recovers the control of our laws, our commerce and our waters. That has been our constant position from the beginning and we will not change it. There has been some progress in a positive direction in recent days, although of course important elements have not yet been agreed We will work to harness them and reach a blanket agreement if possible. But we may not be successful. Either way, as Prime Minister Boris Johnson made clear on October 16, citizens and businesses must prepare for change. that is looming on December 31, whether there is an agreement or not. ”

“We want our future cooperation to be open but fair across the board,” Barnier said. And what did he mean? To the main disputed issues: fisheries, the level playing field and the governance of the agreement. Apart from the fact that the United Kingdom continues to pretend to skip international law if it goes ahead with the bankruptcy of the Brexit withdrawal agreement in relation to the Irish protocol.

“Fishing is very complex, it affects several countries and not all in the same way”, abounds a diplomatic source, “and the 27 are also united in this. We know that the quotas cannot be the same before as after Brexit, but you have to reach an agreement. ”

“We have to find a solution that is sustainable,” say sources from the Spanish Government: “Fishing is a matter of sharing a very traditional fishing environment, very important, for some more than for others in social terms. But in terms of fishing It is important. We also have many cross interests. Both what we fish and what we receive from exports from the UK to our domestic fish market. Fishing is a very special world where fishing is as important as buying fish “.

Regarding the issue of governance: “It is about avoiding the Swiss model”, says a diplomatic source in relation to the trade agreement with the Swiss Confederation: “A model that has proven very complicated to manage by the European Commission and by the States, in which having 25 different tables to address the relationship all it does is complicate the relationship and turn marketing into a kind of permanent policy. That can’t be. ”

“What has not been healthy is that Anglo-British debate that sovereignty consists not in negotiating an agreement,” says a community source, “but in the other saying the same as you. That is a misunderstanding of what sovereignty is. When a government tells you at a negotiation table that it has made Brexit to be sovereign and immediately afterwards it tells you that since it is sovereign, what you have to do is what it tells you, because then it seems to me that there is a misunderstanding about what it consists of. the soberand”.

What the positive has caused is a disruption of face-to-face conversations, which is the most fruitful format. However, for now, the talks continue, albeit virtually. Barnier must be quarantined but will remain “in permanent contact with David Frost,” diplomatic sources say. The rest of the negotiators who were not in contact with the infected person can continue the conversations, while the rest do so virtually.

What remains on the agenda is the meeting of the 27 ambassadors to the EU this Friday morning to discuss the status of the Brexit negotiations.

“As the prime minister has said,” explains a British source, “we have been totally clear that we want nothing more than a Canadian-style relationship based on free and fair trade. It has always been our preference to reach an agreement and we are working hard to achieve this, but only if we can come up with one that is compatible with our sovereignty and thus regain control of our laws, our trade and our waters. That has been our constant position from the beginning and we will not change it. ”

“If we cannot reach an agreement that fully respects the sovereignty of the United Kingdom, we will leave with a status like that of Australia,” says the British source.