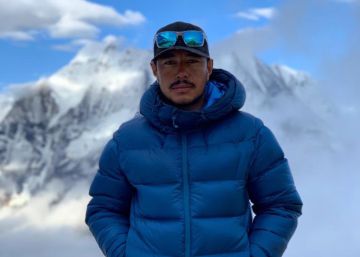 To climb the 14 highest mountains on the planet, all above 8,000 meters, it takes time, will, economic and logistic resources and good luck not to stay on the road. The company takes years of insistence, so many that the fastest to sign up all the tops, the Korean Kim Chand Ho, took seven years, 10 months and 6 days. Achieving it in the ridiculous period of seven months sounded like a joke, a provocation … and mountaineering: isn't this an activity where magic consists in conquering the apparently elusive?

He Nepali Nirmal Purja, former soldier Gurkha of the British army and without a pedigree of climber, baptized his challenge as "possible project", ahead of all the critical and skeptical judgments that rained him. Now, after solving his financing problems and conquering this Friday the Manaslu, his thirteenth eight-eight, only a political problem separates him from success. The Shishapangma is, with 8,027 meters of altitude, the lowest ochomil. Its southern slope is one of the temples of the Alpine style, a place where the fixed ropes are a sacrilege. Its normal route presents a single technical problem: the delicate final edge that separates the central peak (8,008 meters) from the main one. Many resign at this point. For Nirmal Purja, surrounded by Sherpas workers, plugged into artificial oxygen, reaching the top should not be a problem if bad weather does not ruin their plans. The really complicated thing, if any, will be to obtain permission to step on the mountain.

The Shishapangma is completely in Tibetan territory, although its southern flank is just a five-kilometer flight from the border with Nepal. But Tibet belongs to China, which has closed access to its mountains this fall for "security" reasons. Autumn is an excellent time to measure the Tibetan mountains, so it is necessary to look further to understand the real reasons for the closure. October 1 is a great holiday in China, an ephemeris that does not excite Tibetans, inclined to make patent their demands for freedom on such a marked date. Chinese control measures in the area to prevent protests do not constitute a great showcase and the presence of western climbers is not desired.

Behind the scenes negotiations are taking place between the Government of Nepal and that of China with a view to obtaining a special permit for Nirmal and his team. "Bilateral contacts at the highest level are being held to open the ban on climbing the Shishapangma," an official from the Ministry of Foreign Affairs recently confirmed to the Kathmandu newspaper The Himalayan Times. One more element could be added to overcome the bureaucratic barrier: the Chinese mountaineer LuoJing It could be the first of his country to achieve the crown of the 14 eight-year-olds, since he must repeat the Shishapangma (in 2018 he retired from the central top) and on this occasion he would benefit from the work and the ropes of the Nirmal team.

While the mountaineering community doubts about Nirmal's ethics when it comes to climbing mountains and does not consider the admissible challenge under the strict canons of elite mountaineering, the rest of those interested follow with a smile their determination. At this point, the posible possible project ’of the Nepalese will only be impossible if China does not alter its policy.

The commented return of Fernando Alonso to Formula 1: for 2021 and with Renault – La Provincia