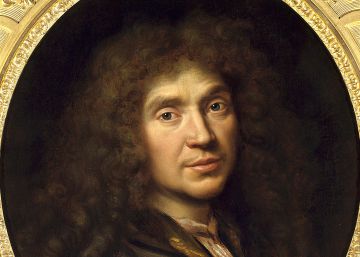 A study published this Wednesday, After three years of work, he reveals the truth: Molière (1622-1673) he wrote his works and had no Cyrano hidden behind a tree that dictated the verses. The finding of two French researchers based on computational linguistics belies the theory fueled since 1919 by the writer Pierre Louÿs who claimed that Pierre Corneille, a 17th-century French playwright, was Molière's "literary black." Lcomputational inguística It is used mostly by the police, to identify a complainant, fight against plagiarism or by investigators to study literature from distant times. The research has been published in the magazine Science Advances.

Scientists have analyzed 37 works of some playwrights of the time besides Molière, such as Scarron, Rotrou, Pierre and Thomas Corneille, through a linguistic algorithm of writing habits and language tics. Scientists rely on the fact that a person writes using a specific proportion of words, expressions or grammatical sequences. If you want to perfectly copy a writing, you will end up betraying yourself with unconscious subtleties that are your own and inimitable. Jean-Baptiste Camps, co-author of the study and researcher of the l'École Nationale de chartes de Paris (France), highlights that plagiarism is impossible since the imposter ends up using the words repeated by the author.

The hypothesis that Molière was not as talented as to write masterpieces soared again in the early 2000s. Those who have believed it throughout this century claimed that the styles of the Corneille and Molière they were too similar, particularly the works The imaginary sick, Tartufoby Molière and Horace or El Cid from Corneille. The lack of literary education of the former was also insisted, in his busy schedule as the king's butler and director of the court theater company. It was a sum of evidence that prevented him, as claimed by some intellectuals, to be the author of such reference literature of the country. The first rumor that was released was that Molière wrote the synopsis of the story, passed the text to Corneille, who versified the text, that is, who did the most complex technical work, explains the study.

No one was certain, they were only assumptions, and the second theory was born accentuating the controversy. According to researcher Dominique Labbé, who became interested in the matter in 2003, most of the plays of the mid-seventeenth century were signed by the actors and poets and not by the actual author of the manuscript. Molière's name, as it was known, served to promote and sell the work while Corneille remained in the shade. His estimate is that 90% of the comedies of that time and half of the tragedies did not have the correct signature, says the study.

The end of the controversy

Labbé has been a guide for Camps and his partner Florian Cafiero, of the Paris-Diderot University, since as they say "I had already done an exemplary statistical work and with a very good idea, although it was not entirely reliable". The work of the French, according to the figures of the study, has results of an accuracy of 93%, 95% and 100%. "We are very happy and we can say that the method will allow us to improve knowledge of old works and resolve authorship disputes," adds Camps.

On the other hand, the low presence of archived manuscripts kept the mystery in a nebula since they were not enough to reach conclusions. The work highlights that the nature of the texts involved some identification problems. The style of classical theater is homogeneous, has the same inspiration, follows very precise rules and codes, for the versification so all the authors have points in common. "What surprised us most was that some verses from different authors could be found in two disparate works. There are a very limited number of literary records and all the texts were very similar," explains the scientist.

Cafiero and Camps have gone beyond the rules of the time and solved the puzzle. They have used six attribution techniques (lexicon, rhymes, prefixes and suffixes, syntaxes and conjunctions) that gave the same result, so they would put their hand in the fire that Molière was the true and only author of his achievements. "Now we want to look for more examples, solve more controversies and teach our students these issues that bring so much enthusiasm to the culture," they conclude one after another.