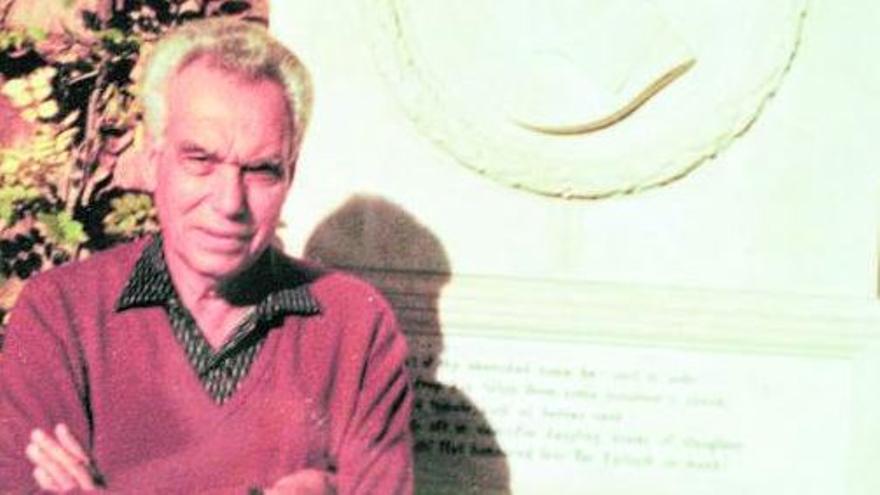 I had the honor and the luck of meeting Manuel González Sosa personally on one of my family trips to Las Palmas de Gran Canaria, where I met him several times. I had his short anthology entitled In spite of the winds, which the Biblioteca Popular Canaria de Taller Ediciones JB had published in 1977, and whose selection allowed us to notice the voice of a poet, but not the best of it. The best came with his Walking Sonnets, published in the Las Garzas collection, La Laguna, in 1992, and of which I keep a dedicated copy and the card that appears inside: Manuel González Sosa; his address: Cirilo Moreno, 1, 6.º B, Las Palmas de Gran Canaria, and his telephone number. His Sonnets, more than his anthology, gave me a glimpse of the true dimension, nature and essence of his work. In the anthology there were glimpses like the second movement of “Telediario”; the thin writing of «A una voz en vigilia», dedicated to P (edro) G (arcía) C (abrera); «Epitaph», which could be related to «Cementerio de Morette-Glière» from Poemas a Lázaro, by José Ángel Valente, and his portraits of Alonso Quesada and Jorge Oramas, which already in their first verses showed one of the most expensive expressive forms of his actor. I mean “Face no; only mask “or” No appetite for light: a smiling / exhalation of light in flesh and time, / and in generous eyes that populated / all of midday. ” What that anthology strengthened were the poems with a theme closer to that of the postwar poets, characterized by their political-social commitment. In Manuel González Sosa’s poetry these themes are present, but his treatment is quite different, as is his existential vision of time (“the tiny tear of Time” is a verse of his), which, together with his tone of reflection moral, brings him closer, more than to the poets of his generation, to those of the following: those of the 50, with whom it is not difficult to notice some confluences. For all these reasons, I think that Manuel González Sosa is not an isolated case in our post-war panorama, but rather —like Vicente Gaos, the Cántico de Córdoba group, or Manuel Álvarez Ortega— is a poet with a voice and a world of his own, who escapes — such Sometimes for this very reason — to the hasty —when not malicious or mediocre— classifications to which our deficient literary historiography and our increasingly showy intellectual world are so given.

The reading of his complete Poetry has been a pleasant surprise for me, that I have seen my first impression confirmed – that of the late seventies and early nineties of the last century – and my suspicion – not only from then – about the evaluations and classifications made by our literary historiography. In the work of Manuel González Sosa there is – along with a devotion to the sonnet, which is a distinctive feature, but not exclusive, of a certain period, and an assimilated reading of both ’98 (Unamuno and Machado) and Góngora («cela in his voice the sea, the bird, the wind “or” neither sprouts from gems, nor from gold “), from 14 (Juan Ramón) and 27 (Alberti, Diego, Salinas, Aleixandre, Altolaguirre) and also by Rilke – a determined will to open writing towards Latin America, as evidenced by his travel poems, the quotes from José Martí, Pablo Neruda or César Vallejo and the indigenisms that his lexicon collects; an obsessive insistence on the word “dream” and on the verb “dream” that must be related both to European romantics and to what he himself calls “greed for distance”, which constitutes a wink in itself, as it is also that “crucifying the flight is its destiny”, significantly dated 1946; “Barefoot Woman” could refer to “Woman with Alcuza” by Dámaso Alonso; in the triplets of the sonnet dedicated to Saint John of the Cross there are clear reminiscences of Horacio and his Carmen a la “Fons Bandusiae”; there is a growing tendency towards overlapping and investigation and experimentation in and of fixed forms. But what is most striking is his reflective process: that getting “into / into the eyes that think”; those economic gradations: “dreams, hidden tear, ephemeral happiness”; the masterful use of the tenth, which owes little or nothing to Jorge Guillén’s; or the use of the dramatic monologue in “Epimenides de Knossos.” “Las garzas” seems to me to be one of his most successful poems because I believe that it fully conforms to what its author wanted to do and that, therefore, it could serve as the key to all his poetry. Gifted for the perception of time as well as for the perception of space, his “landscaping” —if that part of his work can be called that dedicated to shaping the perception (instantaneous or not) of different places— and his excellent “Interviews”, obtained prose poems, with echoes of Unamuno, Azorín and Miró, but all of them with an indisputable stamp of their own, in which the problem of poetic truth is posed – like Aristotle – and in which a painter’s retina is combined with a sensitivity and expression of a poet, I consider them texts of both poetic and metaphysical height. The same could be said of the series entitled Contraluz italiano. The only thing that surprised me was not seeing his version of Blanco White’s “Night and Death” included, published in the “Literary Archipelago” supplement of the Jornada newspaper (Santa Cruz de Tenerife, May 4, 1991).

I believe that Manuel González Sosa occupies a prominent place both in Canarian insular poetry and in Spanish poetry of his time: a place that should be placed chronologically halfway between the generation to which he belongs by age and the generation of 50, which followed. On the one hand, it coincides with those in the treatment of some subjects; on the other, it departs from these topics, evolving both in themes and in forms towards a different textual space, which is not entirely that of the authors of the next generation. I therefore consider that González Sosa has a mental universe of his own, unrelated to drama and tremendous gesticulation, but that he writes a poetry of denunciation with a personal stamp and that he tries other forms of poetry related to his existential philosophy and metaphysical concerns, and that this translates into a writing no less unique. More than in a “no man’s land”, in which it neither was nor should be, it should be encompassed within a chapter between the poets of the 1940s and 1950s, without being entirely owned by any of them and without ceasing to belong completely Neither of the two. “Other postwar poets” could be his title, if it were not as arbitrary as it was insufficient to define a writing like his and that of others that in many respects seems more significant than what the manuals of that period usually show.

Rather than possessing today “a fair and precise image of Spanish poetry from the second half of the 20th century,” I believe that what we have or are in the conditions and ways to have is a more complete image —that is, more adjusted and comprehensive— of a historical reality that was previously limited and, therefore, distorted, and that it would now be convenient to objectify. Literary historiography has the enormous Schriftum that has been rescued in recent decades and that introduces in the previous vision of the whole new elements whose valuation affects that of all the others. And, as Hegel says, “only the whole is true.”

I believe that a poet who — whatever the circumstances — has been kept out of the eyes of scholars for decades, once his work has been collected and edited, should be the object of study on equal terms with all the others. Otherwise, literary historiography would be a series of closed compartments and not continuously open, which is how they should be.

Jaime Siles is a poet, critic and professor of Classical Philology at the University of Valencia.