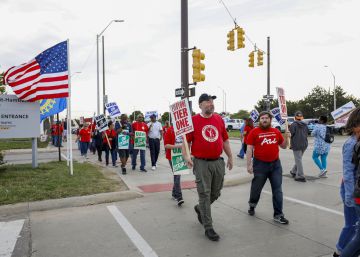 Many cars honk as they pass in front of the plant as a show of support. Police, emergency vehicles, individuals. General Motors workers, one of the great icons of American industry, began on September 16 the longest strike of this company in half a century, in a country little given to stopping factories, for the negotiation of a new collective agreement that has become something else, in a sort of final battle for an increasingly threatened United States employment model. The pickets organized by four-hour shifts remain at the gates of 34 centers throughout the country continuously since then. The hot coffee thermos, the donuts and the greetings of the drivers have not diminished, but the mood of the workers, yes.

Carla Ducket, close to retirement and employed at home since she was 18 years old, is the living memory of every fight between workers and companies. To remember, he remembers until the 1970 strike, which lasted 67 days, and was seconded by his father, Arnold Monhollen, one of those southern immigrants, specifically from Kentucky, who arrived in Detroit with the boom industrial and entered General Motors. “I was small, and I remember that we ended up feeding ourselves with food vouchers (for families you need), but we endured and there was agreement,” he explains.

It's Friday, 9 in the morning at the gates of the Detroit Hamtramck plant, one of the five that the company put on death row in November 2018, when it announced a restructuring of almost 14,300 employees. A dozen workers march up and down with banners but little spirit, terrified by the cold wind of early October. The factory, opened in 1981, at the beginning of the Reagan era, is still active with only one shift to produce two impressive cars, the Cadillac CT6 and Chevrolet Impala, but its future is uncertain as of January. Or worse than uncertain, because it is part of the conversations between company and union.

There is no negotiation without hostages. Every day of unemployment, according to different analysts, the company loses about 100 million dollars. Meanwhile, workers have stopped charging and subsist on a payout of $ 250 per week, coming from a solidarity fund of the UAW, the big motor union. General Motors claims that it needs to contain global labor costs – including salaries and medical coverage, among other benefits -, now above the level of its competitors, while workers demand a double-scale wage brake suffered by new employees and more investments that guarantee the future of the plants.

“It's hard to see that young people don't have the same things as us: a house, a car, starting a family. New employees are living in their parents' homes, and they cannot afford to buy the vehicles we produce here, ”Duckett claims. The newly hired General Motors charge between $ 15 and $ 17 per hour, compared to 30 for the rest, and do not achieve salary equalization before the age of eight, if they arrive, because many of these positions are temporary. The union claims that the matching does not take more than two or three years.

For the worker, what is played these days is much more than a labor dispute between a company and 49,000 employees. "We are the middle class, those who consume, if they do not pay enough, who will buy the cars they manufacture," he says. Born in Detroit, she has witnessed the decline of the great American industrial capital and its suburbs of middle-class workers, for whom entering General Motors or Ford was the security passport. Then, General Motors had a 50% market share, but today it does not reach 20%, Asian cars push through.

The conflict also recounts the decline of the former almighty UAW union. In 1950, the union of workers signed a collective agreement with General Motors that marked the pattern for the manufacturers of the time, the engine of the American middle class. The so-called Detroit Treaty granted pensions for workers, set annual salary increases and improved medical coverage. It is the time when thousands of families in the South, many African-American, moved to the north in search of prosperity. Sample of that power, it was the union that was responsible for paying the bail of activist Rosa Parks, in 1955, when she was arrested at the start of the movement against racial segregation on Alabama buses.

Unionization in the United States has fallen since its height in 55, when 30% of employees belonged to some group, to 11%, which drops to 7% in the case of private companies, according to data cited by The Economist. Workers have progressively lost bargaining power, since the concentration of the sector has limited their options to leave for a rival company and factory relocation has made them compete with much cheaper labor, in China or Mexico.

Simon Dandu curses under his breath when the difference in costs between the states of Michigan and Guanajato is mentioned, where the hourly pay is around $ 4.50, according to Reuters. "He pToyota's executive resident earns two million dollars a year, and ours (Mary Barra), 20 million … They are not sincere with the issue of money, they want us competitive, but only on our part, not yours, ”he protests. Employee of the plant for 19 years, recalls the public rescue of the company in 2009, when the Government injected 50,000 million dollars, and the cuts assumed by the staff. In the last three years he earned 8,000 million dollars last year. “We have helped them, we have helped them to develop the technology, and now, with that achieved, they are going to produce cars to Mexico, okay, but are they coming to sell them here?” He protests.

According to data from the specialized publication Automotive News, in the first eight months of the year GM produced 600,000 vehicles in Mexico, 80% of which were sold in the United States. But General Motors fears costs that are also higher within the United States: with the pure salary and additional benefits, the cost of a worker with seniority amounts to $ 63 per hour, compared to 50 for other competitors without unions.

Few crises contain as much political dynamite as this: Donald Trump came to the presidency, stirring, among other battles, the one of the industrial belt crisis and the flight of activity to other countries. He has publicly criticized GM for closing decisions, but its general economic policy has resulted in a conservative cut, with important deregulation measures and the largest tax cuts in history for companies. In this conflict, the Republican president has limited himself to asking the parties to reach an agreement: getting on the union side would result unnatural, support the company to which he has reproached relocation so much, an impossible one.

The plants indicated by the company almost a year ago have already begun to bleed. The one in Lordstown, in Ohio, stopped producing the Chevrolet Cruce in March, those in Baltimore (Maryland) and Warren (Michigan) have already ceased the activity and that of Detroit, Simon and Carla, has one year left of lifetime. "The final disposition of these facilities will be determined in the framework of the current negotiations with the UAW," General Motors responds via email. Of the 2,800 workers affected, he says, 2,400 have relocated to other plants. The fifth factory affected by the adjustment is in Ontario (Canada).

The company can lose up to 1.5 billion dollars with this conflict, according to Credit Suisse calculations. On Friday, before the blockade with the union, he took an infrequent step and went directly to the workers to defend his last offer, which increases the investments promised in the United States from 7,000 to 9,000 million dollars, proposes to improve salaries with extra payments and maintain health coverage "The strike has been very hard for you, your families, your communities, our suppliers and our vendors," said Gerald Johnson, vice president, in a letter to the staff. "It is crucial that we manufacture again," he emphasizes in the letter, collected by Bloomberg. The new Detroit Treaty remains on the eave.

In the trenches of the fight against COVID-19 in Mexico