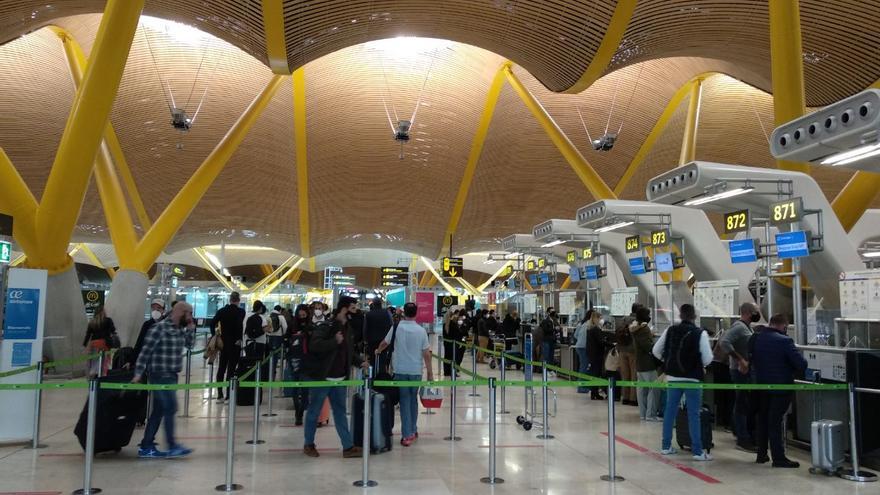 At the Avenida de América bus interchange, one of Madrid’s great transport hubs, a police officer tries not to lose patience with a man who wants to return to Zaragoza, claiming that “the pure reality” is that he is from there. “Pure reality is not a cause of force majeure,” the official ends up settling, and the man gives up: “I am here to do things well. I’m sorry to bother you.”

The frustrated traveler is José Aladrén, 54, a de facto resident of Zaragoza, but not in the register, where he continues to appear as a Madrid native. On Thursday he came to collect “some documents” and did not find out in time about the perimeter closure of the capital. Now he does not know how to prove that he is Aragonese, beyond his surname, and he is worried because he does not want to abuse the trust of the friend who is hosting him. “In two days I don’t know whether to take the suitcase and let it be what God wants,” he ventures.

The episode is not the general trend of a normal Monday in Madrid, and José wonders if wanting to do things well has caused him greater problems than lowering his head and being clueless. A walk through Terminal 4 of the Barajas airport could confirm your suspicion. Laura and José arrive at the check-in queue, these yes from Madrid for all intents and purposes, who fly to Dublin, where they work as teachers. “No, we haven’t asked for any paper,” they shrug. Nor have they claimed it. Francisco Muñoz, a manager in an elevator company, also a Madrid resident, travels “too much.” Today he flies to Vigo, and he has not gone through any control, beyond showing his boarding pass, which is mandatory to enter the terminal.

Queues form at check-in counters, but passengers walk without the traffic jams, crashes and hustle and bustle of before the pandemic. Mrs. Griffet, who has been on vacation for a week between Madrid and Villanueva de la Cañada, returns to France without documentary mishaps. “I have not had any problems,” he says. The same as Ardiel Jiménez, a Canarian surfer who returns from Puerto Rico with his wife, Rosana Camuy. The couple traveled after signing a declaration of responsible health, but ruled out extending the stopover on the peninsula, given that “this is getting complicated.” They were not affected by the new restrictions, since Madrid was neither the origin nor the destination of their journey.

The perimeter closure has been in force since Friday, but the Community Justice Counselor, Enrique López, assured last week that whoever skips it would not be fined until the Superior Court of Justice decides whether or not the resolution is applied of Health that has led to the confinement of the capital and 10 other cities in the region.

An employee of the Chamartín station, which connects the capital with the north of the country, says that the police “have no order” to intervene. If there were, they wouldn’t have too much work either. “This is dead,” confirms a security guard at 10:00 am, near where two volunteers from the NGO Aida set up a solidarity stall with second-hand books. They have been doing it twice a month since the lack of refinement, in July, and already then they noticed a significant drop in travelers that continues today, according to Maite López, head of the initiative.

At the other large train station, Atocha, the passage of travelers around 2:00 pm is reminiscent of a normal day in the Cercanías area at lunchtime. Along with the platforms of Puerta de Atocha, from where the long-distance convoys to the east and south of the peninsula leave, there are far fewer travelers. “Everything normal,” says a patrol policeman.

Traffic data certify that this Monday morning was very similar to any other. The number of vehicles that circulated on the M-30 was 4.4% less than last week, but in the inner urban roads it rose a little 0.1% and in the exterior, 2.1%, according to the City Council . The decrease is more pronounced if it is compared with the normal before the coronavirus: between 16.3% and 19.5% less, depending on the route. In the subway, trips increased by 2% in the strip between 6 a.m. and 10 a.m.

The use of public transport did decrease over the weekend compared to the previous week: on Saturday, 4%, and Sunday, 6.3%, according to information compiled by the transport consortium. The drop was greater if only interurban transport is taken into account. Buses, 9.7% on Saturday and 10.9% on Sunday; and commuter trains, 19.3% and 21.8%, respectively.