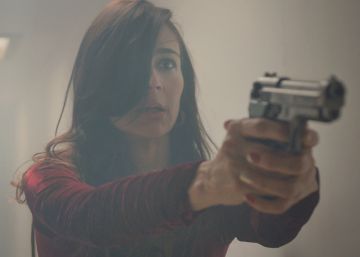 The bad night approaches the hell of trafficking Through the life of Dana -interpreted by the Colombian Noelle Schonwald-, a forty-something prostitute, mother of a girl who does not live with her and addicted to opiates. The viewer in much of the film, which has just won the public's prize at the Latin American Film Festival in Quito, has the feeling of looking through a peephole, which prevents seeing the whole, as is the case with trafficking. . The director of the film, the Ecuadorian Gabriela Calvache (Ambato, 1977), has her reasons: "The cinema is the art of the minimum, of telling sensations, moments, instants".

It all started when the director met a group of teenagers who They were forced to prostitute themselves in 2011. The story could become his second documentary -Calvache premiered his first documentary film, Hidden tillage, in 2010-, but the Ecuadorian opted for fiction and began interviewing numerous prostitutes and clients to understand the world of trafficking.

With so much information the writing process was long, he made 15 versions of the script. Calvache remembers that the first ones had many dialogues and then they were losing weight. "We tend to write dialogues, we are oral, but cinema is made up of images and my job was to learn to write with images." While rewriting the script, she recognized the gaps she had as a director. "Writing is not the same as directing," he acknowledges. To take the project forward she relied on some filmmakers with more filmography than her and even took acting direction classes for two years.

Despite their efforts, no national producer wanted to move the project forward and Calvache had to look outside. I wear The bad night, even in papers, to the co-production meeting of the San Sebastian Film Festival and the meeting of producers of the Festival of Cartagena de Indias and little by little the project was consolidated. One of the mainstays was the agreement he made with the Mexican producer Geminiano Pineda (Cine Caníbal)

Through the peephole that opens Calvache are also some moments of the life of Julian -interpreted by the Bolivian Cristian Mercado-, a doctor who is a client of Dana and wants to go beyond the four walls where they have sex and peeks at the malidad de Nelson – a role that takes to the screen the Ecuadorian Jaime Tamariz, who left the tables to debut as the villain of the film, who recruits women for the business of trafficking.

The film has the wisdom to show the ravages of an earthquake and turns these images into a powerful metaphor of how the lives of people touched by trafficking fall apart. However, we must clarify that it is not a complaint film, its director did not have this intention, but it does put the issue of trafficking on the table. "My job is to make movies and I hope the movie touches hearts and not brains."