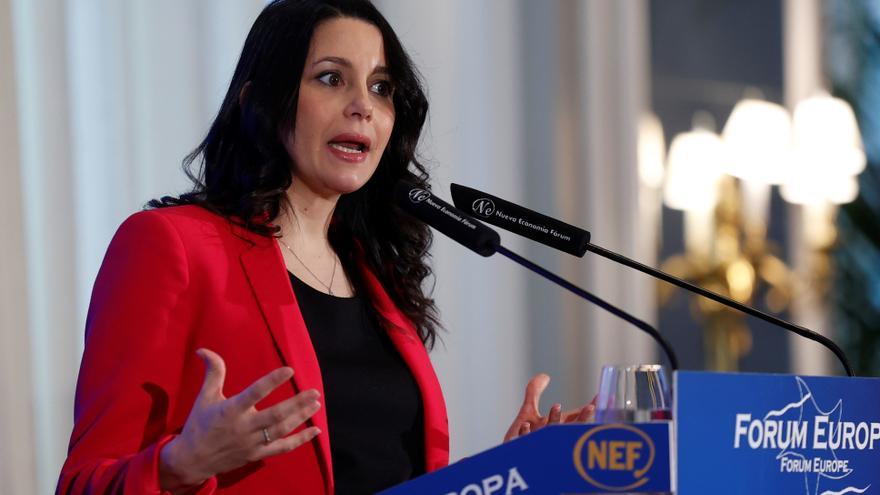 Inés Arrimadas is not discouraged by the terrible prospects that all the polls predict for Ciudadanos, both in these imminent elections in Castilla y León and in other upcoming appointments with the polls, and this Friday she assured that she is convinced that her formation will overcome the pothole and It will be “decisive at the national level in this very fragmented scenario because everything will go in the song of a hard” and they will be the ones who will “tip the balance towards the side of good sense.” In his opinion, even if they lose seats, “a party with few deputies can do more than another with many.” This is what she said at an informative breakfast organized by Nueva Economía Fórum in which she was presented by the deputy mayor of Madrid, Begoña Villacís, who has not spared praise for her person and her political career.

“Those of us who defend the liberal project know what we are risking,” said Arrimadas, who, after recalling that in Germany the liberals failed but took flight shortly afterwards, has predicted that “those who are nostalgic for bipartisanship ” and to the PNV, Rufián or Otegi, “Citizens will continue to be essential and decisive” in the future. “We are a government party, the most difficult thing I have done, which is to show that we know how to govern,” he recalled.

The leader of Ciudadanos has assured that “truth must be rewarded at the polls and lies punished”, and in this sense she has addressed the citizens of Castilla y León to ask them that on February 13, the day of the regional elections, “reward at the polls the honesty of a party that has managed to transform its community”, forming part of the government in these two and a half years.

For his part, the Ciudadanos candidate for the Presidency of the Junta de Castilla y León, Francisco Igea, present at the breakfast, briefly took the floor to make it clear that if it is up to him, his party will not make president again Alfonso Fernández Mañueco: “I guarantee two things: that, and that we are all mortals. I speak in old Castilian”, the former vice president of the Castilian-Leonese Board has ironized.

Arrimadas has taken advantage of the moment to criticize the call for these early elections, which in his opinion was an idea of ​​the leader of the PP, Pablo Casado, who gave the order from Genoa to “cover” the victory of the president of the Community of Madrid, Isabel Díaz Ayuso, and the judge “who is investigating the legal cases of the PP” there. According to what he said, Mañueco was “afraid” that the regional coalition government would continue because there were measures that remained to be approved on “employment and transparency”, which are the areas that his party has taken.

The leader of Ciudadanos has compared the situation with the decision of Pedro Sánchez to place the former Minister of Health, Salvador Illa, as a candidate for the Generalitat de Catalunya, “in the middle of the pandemic”. “Casado has done the same with the elections in Castilla y León”, he has sentenced. “This operation is worthy of Sánchez, and Sánchez must be beaten by being better than him, not being the same”, he pointed out.

He has also taken the opportunity to charge Casado for denouncing in Europe the distribution “by finger” of funds for the pandemic while agreeing to share constitutional bodies with the PSOE, including the judiciary. “Both things seem wrong to me,” he said, criticizing Vox in passing for supporting that the Government could have “wide sleeves” when it comes to distributing aid, supporting with its abstention the validation of the decree law on the governance of European reconstruction funds.

“I am very concerned about the use that the Government is going to make of these funds,” she added, warning that she “fears” that Sánchez will reach the elections “distributing bills and the money from those funds throughout Spain.”

Arrimadas has once again demanded the reform of the Electoral Law to prevent “nationalist and separatist” parties from achieving “overrepresentation” in the general elections and being able to condition governments.