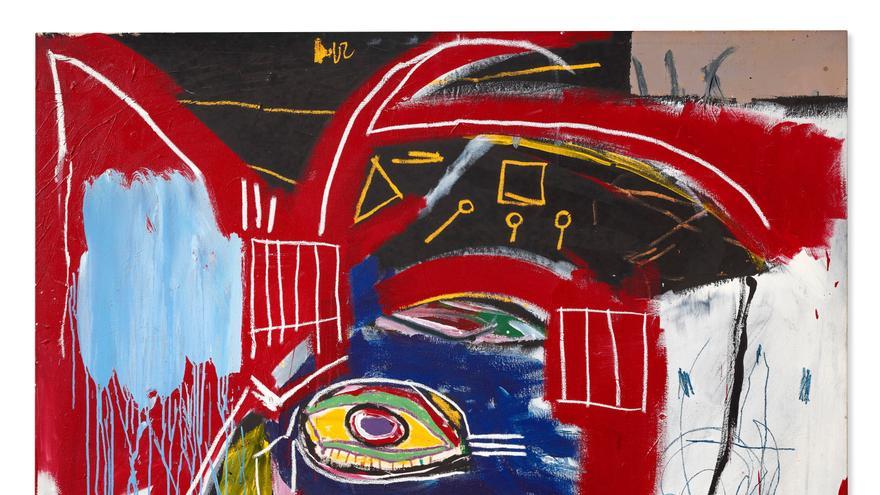 New York, May 11 (EFE) .- A monumental painting by Haitian-American Jean-Michel Basquiat, “In This Case”, reached 93.1 million dollars on Tuesday at a Christie’s auction held in New York, almost doubling the price that the experts of the company had estimated.

The sale of “In This Case” started at 40 million dollars, but it took less than 10 seconds to rise to 50 million, the price that Christie’s had estimated for the valuable piece, the undisputed star of the 21st Century Art auction from this leading auction house in its sector.

The “fight” for the painting lasted about 10 minutes later, when a bidding battle broke out between three telephone buyers, which raised the hammer price to 81 million dollars, a figure that reached 93.1 million when added fees and commissions.

It is a large piece, almost a meter wide and about meter ninety high, in which red dominates and whose protagonist is one of the famous skulls of this late artist, who died at the age of 27 in 1988 , but that he was able to witness part of its success.

The painting has thus become the second most expensive work of Basquiat sold at auction, only behind another of the artist’s enormous skulls, “Untitled” (1982), which was sold in 2017 for 110 million dollars in a Sotheby’s auction and that set a record price for a work by the American.

“In This Case” is the last of a series of three skull paintings that Basquiat painted in 1983, which until now was in the hands of the fashion designer and co-founder of Valentino Giammetti, and which was included in the retrospective organized by the Louis Foundation Vuitton in Paris.

Basquiat’s second work to be sold at the auction this Tuesday was “Untitled (Soap)”, which however did not have the same reception, since it did not exceed the maximum estimate of 15 million dollars that Christie’s had granted. , and was left at 13.1 million after a slow bid and with little enthusiasm.

Also warmly received was one of Louise Bourgeois’s famous spiders, “Spider V”, a steel sculpture just over half a meter high that fetched 5.5 million dollars, within Christie’s estimates. estimated a price between 4 and 6 million dollars.

Worse night still had a curious sculpture by the German Martin Kippenberger, “Martin, ab in die Ecke und schäm dich” (Martin, in the corner, you should be ashamed of yourself), in which he represented himself looking at a wall in punishment position, and that it remained at 9.5 million dollars, below the minimum price of 10 million dollars that the experts had calculated.

The British Banksy also did not exceed Christies’ estimates, and his work “Laugh Now But One Day We’ll Be In Charge”, a graffiti featuring three monkeys with posters displaying the same message, was sold for $ 2.07 million, slightly above the 2 million minimum price but far from the 3 million maximum expected price.