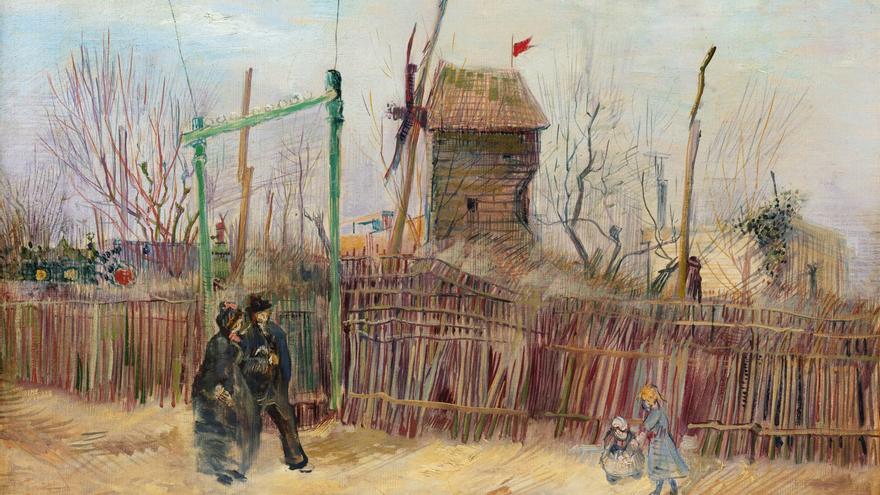 Paris, Feb 24 (EFE) .- A painting by Vincent Van Gogh that has not been seen in public for a century will be auctioned in March with an estimated sale price of between 5 and 8 million euros (between just over 6 and 9, 7 million dollars), announced this Wednesday the houses Sotheby’s and Mirabaud Mercier.

The work “Street Scene in Montmartre (Alley of the Two Brothers and the Pepper Mill)” was painted in 1887 during Van Gogh’s period in Paris, and shows a couple walking on the Parisian hill of Montmartre.

This painting, which has been in a private French collection for a century and has not been seen in public since, will be the star of the Impressionist art auction that both houses will hold in Paris on March 25.

The sale can be followed from any Sotheby’s world headquarters as well as by telephone and internet.

The painting is part of a series of works that the Dutchman made on the Mill de la Galette, in Montmartre, and has always been in the hands of a family of collectors who have preferred to remain anonymous.

On the journey of the painting since it was painted in 1887, the curator of the sale, Fabien Mirabaud, explained that they believe that “Théo, his brother, kept it, that it passed through some unknown intermediaries and that before 1920 it was already in the hands of this family, “he told reporters.

The experts involved in the sale are confident that the estimated starting price will be reached, which is lower, for example, than that reached in 2020 by a country landscape sold in the Netherlands for 15 million euros (18 million dollars).

“It is a revolutionary painting because it incorporates light colors and vivid pigments into Van Gogh’s work,” said Etienne Hellman, specialist in the department of Modern Art and Impressionism at Sotheby’s.

The expert Aurélie Vandevoorde pointed out in the presentation conference of the work that “in this painting the artist recovers the tradition of the Dutch landscape” that he uses to paint Montmartre, an artists’ neighborhood.

The Dutch Van Gogh (1853-1890), lived in Paris between 1886 and 1888, a period in which he coincided with some of the leading artists of the time, such as Gauguin, Pissarro or Toulouse-Lautrec, contacts that marked a strong evolution in his painting, with which he stood out in post-impressionism and expressionism.