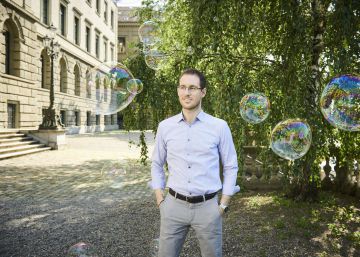 The Fields medal is almost a definition of the mathematical genius, so if you try to form an image of the 60 people who have received the award since 1936, the easiest thing is for you to leave the Adams family house or any other frame of the hell, all full of bald, fat and abstracted people, with the chalky eyed vest and a sock of each color. One of the 2017 medalists destroys the painting completely. Romano, 35 years old, tall and distinguished, kind, sensible and a student of humanities rather than a scientist, Alessio Figalli seems designed to deny the archetype of the mathematical genius that we all have embedded in the head. Read on Matter an interesting interview with the.

There are geniuses who look like normal people. Maxwell, the visionary physicist and mathematician who formalized all known electrical and magnetic phenomena and for knowing in only four equations an insulting simplicity, was an affable man and lover of his family, with a personality that never betrayed the impetuous revolution that was being setting inside your head. So was Niels Bohr, the founder of the Copenhagen school that revealed the quantum nature of the world. And Emmy Noether, the fabulous math who discovered the deep symmetries that govern the laws of physics and inspire physicists to find them. And Nobel laureate Frank Wilczek, co-discoverer of the nuclear force that holds atoms together. I don't know why Diana Krall, the jazz pianist who has destroyed psychotropic topics about piano and jazz comes to mind.

The questions that Figalli raises about the pedagogy of mathematics are surely very important. Very few people perceive the creative, almost artistic, nature of mathematics, and the most likely reason is that what they saw in school was rather a ghastly chain of doctrines fallen from the sky without the slightest connection with the interests of laziness, a memorial nightmare of chalk on blackboard and wet eraser. Figalli emphasizes that mathematics is a school of reasoning, and one of the best mental gymnastics that can be communicated to the lads to stimulate their imagination and creativity.

And it gives a lot of ideas of direct application in pedagogy: the close relationship between prime numbers and cryptography that protects all digital transactions; the logical center of the Google algorithm, which is based on an advanced statistical concept, the Markov chains; how Fourier analysis underlies WhatsApp voice messages, and how multidimensional algebra underlies Instagram filters. They are recipes to hook a kid until he can't help learning the math that explains his world. Great ideas of a normal genius.

The impact of the first asteroid ended the “Snowball Land”