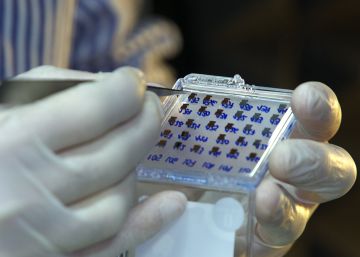 The Fero Foundation has also awarded a "disruptive" investigation led by Roger Gomis, of the Institute of Biomedical Research (IRB) of Barcelona, ​​on how the metastasis of breast cancer of the luminal type in the bones originates.

"Until now, it had been associated with cells that help to degrade and repair bone, but we have demonstrated a relationship between tumor cells and those that make up the bone marrow," Gomis said in an interview with Europa Press.

"We are the first to try to understand how this communication occurs" between cancer cells and bone cells, after detecting that when they grow cells in a laboratory model – mice that have been implanted with human cells -, Tumor cells grow faster and more aggressively.

15% of patients with this cancer undergo metastasis, which in 70% originates in the bones and then goes to other organs, where oncologists can lessen the symptoms, but not cure: "If we understand how tumor cells speak with their environment to grow so aggressively, we may be able to cut off communication "and avoid metastasis from the beginning.

The research, which focuses on the fibroblasts of MSC cells that are in the bone, can open the way to intervene in patients with drugs, which in this case would be biological (such as antibodies), and towards a personalized medicine, explained the leader from work.

The Fero Foundation He has celebrated his tenth anniversary this Monday and it is the sixth time he has chosen Madrid for the event. The private Spanish institution was founded by the Dr. Josep Baselga and is dedicated to cancer research.

The objective of the foundation is to involve society in research and give visibility to scientific projects. He has invested 14 million euros and has financed more than 80 projects. In addition, it has offered 18 scholarships of 80,000 euros each to promote and support youth research.

The scholarships allow the translational studies to continue for two years – they seek to connect the basic research with the clinic – to those who have distinguished themselves by being based on a "pioneering research technology", explained the entity.