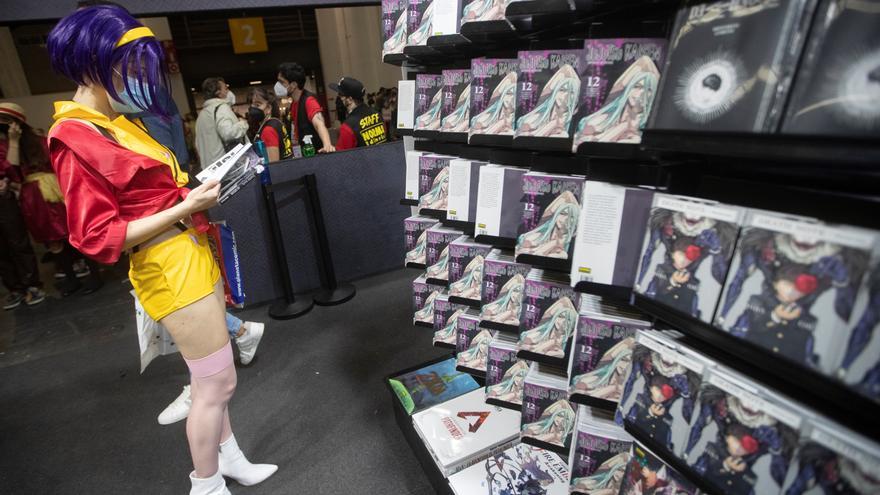 In recent months, the Japanese comics market in Spain has been experiencing unprecedented growth. The controversies and social alarm that accompanied the first titles that were published, at the beginning of the 1990s, are now far away, and today manga not only seems fully established in the publishing market, but is also multiplying its sales at high speed. The CEGAL report confirmed that, in a context of generalized growth during 2021, the comic had grown by 70%, a percentage mainly due to this manga boom, which has meant that, in recent months, titles such as Tokyo Revengers (Editorial Standard) by Ken Wakui or Haikyu! (Editorial Standard) by Haruichi Furudate are crowned among the best sellers in the book market. But it is not just a Spanish phenomenon: even in others with a powerful indigenous production such as the United States or France, something very similar is being experienced. In the French case, it is symptomatic that the cultural bonus granted to young people was spent mainly on the purchase of manga.

Young people will invest the cultural bond in video games, manga and shows

Recently, the publishing giant Penguin Random House has announced the creation of Distrito Manga, its own label that comes to join a large publishing scene that, in the last two years, has grown a lot with the arrival of small publishers in search of their space. . Catalina Mejía is editor of Distrito Manga together with Claudia Cucchiarato, and also responsible for the graphic novel imprint Salamandra Graphic. In his opinion, the sector is in an excellent moment: "We have market studies that indicate that comics are what has grown the most in recent years, mainly due to manga: 70% of the hundred best-selling titles are sleeves”. This sudden growth has to do, in the opinion of Oriol Estrada, content advisor at Manga Barcelona, ​​with the pandemic: "I call them 'coronaotakus': children between 9 and 12 years old who began to watch anime on different platforms during confinement, and that they have miraculously made the leap to paper”. Paloma Liranzo, illustrator and bookseller at Generación X (Madrid), has an impact on this massive arrival of young audiences: “The season of their favorite anime ends and they launch themselves into manga. In the bookstore, we had it in a less visible area, but we moved it to a priority space when we sensed that something was happening”. Currently, in her bookstore, manga accounts for 25% of total sales. "I am very surprised by the interest there is," continues Liranzo. “They are no longer the nerdy boy stereotype, but rather whole groups of classes come to look for his manga, they share his hobby.”

For Mejía, another key is the variety of the offer. “All kinds of manga are being sold, although it is true that shônen (manga aimed at young boys) is still the leader. But there are smaller publishers with more minority demographics or genres, and they're working. The readership of this type of content is expanding. Because there are already many more women who come to read the manga, and because it is no longer just that action shônen”. Liranzo affirms that the material that is published is overwhelming: "I myself, who is supposed to be a reader mainly of manga, I am not able to keep up and read everything." In Estrada's opinion, this variety has to do with changes in the reading public. “People are no longer embarrassed to read manga like they used to be. There are also comic book readers who, tired of the usual, are turning to manga, because there is such a wide variety”. But a new audience is also arriving, and not just youth: "People who have never read manga are watching Attack on Titan, or reading some successful manga," explains Estrada. “People lose their fear. Now, there are a number of titles that are mainstream, but not all series are. Much of the manga that is published is not. But the big titles, like Dragon Ball or Naruto, have achieved it."

Mejía is clear that the Distrito Manga catalog has to respond to this variety, and among its first announced releases are a BL (acronym for Boys Love, a manga about sentimental relationships between boys), Joy, by Etsuko, an action series such as Ranger Reject by Negi Haruba or a shōjo (manga aimed at young girls) like Love in Focus by Youko Nogiri. “The goal is to create a label focused on Japanese manga, although in the future there may be projects with Western authors, and incursions into Korean manga or Chinese manga. We will publish works from all the demographics that now works: shôjo, shônen, seinen…”. With the intention of taking care of its editions and, especially, the translation, Distrito Manga will clearly bet on an area that has never finished working well in Spain: that of digital comics. “In Japan, since 2017, the sale of digital manga has surpassed that of paper manga. Obviously, this phenomenon is not as developed here, but we consider that digital sales are an important complement. We are going to try to negotiate that all our manga come out with a simultaneous digital edition.”

But there are always doubts that arise at a time of prosperity in the sector: to what extent will this growth be sustainable? For Estrada, there are clear differences with respect to other moments of splendor of manga in Spain. “For the first time, I see that the publishers believe it, and that is why I feel that this is serious. Even a small publisher like Ediciones Tomodomo has announced the figure of twenty thousand copies sold of Orange, by Takano Ichigo. At this time, it has been possible to stop the flight of the adult audience that existed in manga, where the opposite happened than in other types of comics, in which the adult audience remains but it is difficult to renew the young. Now, people over 35 and 40 are still reading, and even another one who had read manga in her teens but had given it up is re-enlisted.” Mejía points out another important issue: the presence of manga in non-specialized bookstores. “Anyone, even if they don't have space to have everything that is published, is aware that they have to have the ten or twelve flagship series”.

In this scenario, small publishers are playing a crucial role. Estrada, who does not believe that the entry of large publishing groups threatens its survival, “because the small ones are occupying very specific niches”, stresses that “both models can coexist. Some small publishers are doing very well and meeting a demand with short but profitable runs. Now they have much more information, they learn from the mistakes of others thanks to the networks and they know what they have to do. A project like Milky Way began as a project of three friends who edited in their spare time, and now it is one of the most important medium-sized publishers”. Liranzo also values ​​this publisher very positively, of which he says that he "has done a great job, and has known how to choose his catalog very well: everything is on the same line." The bookstore also highlights the work of Arechi, Yermo Ediciones label, which is recovering some classics such as City Hunter by Tsukasa Hôjô or Candy Candy by Keiko Nagita, with good sales. However, Liranzo is also critical: "There are publishers who are joining the manga because they see that everyone does it, but you have to have knowledge, know what has worked in Japan, be aware of the impact it can have."

When asked about the future, they are all optimistic. Oriol Estrada quotes the words of David Hernando, editor of Planeta Cómic: “Probably the soufflé will drop at some point, but it will not drop to the levels of five years ago. Three rungs have gone up and maybe one will go down, but this is here to stay.” Paloma Liranzo expresses herself along the same lines: “Everything that goes up ends up going down, but it's not going to be an exponential drop, it's going to stay the same. Keep in mind that a large part of the audience are kids who are in the process of changing their lives. Of ten who are now crazy about manga, maybe in ten years three are still reading it. But the important thing is to maintain that connection, that those who leave are replaced, that it is not a fad”. Catalina Mejía is clear that Distrito Manga's commitment is long-term: her plans for 2023 are to publish some thirty series, which means launching more than one hundred volumes on the market. They will even be encouraged by the edition of classics, "titles that were published at a bad time and did not find their audience", some of which will be announced in the next edition of Manga Barcelona (December 2022), the most important otaku salon in the State , which in its last edition, even with the measures of the pandemic, brought together more than one hundred thousand visitors, and which in 2022 will become the most reliable thermometer of this boom. Mejía is clear: “Manga consumption is normalizing. It is no longer a niche: it is mainstream culture”.