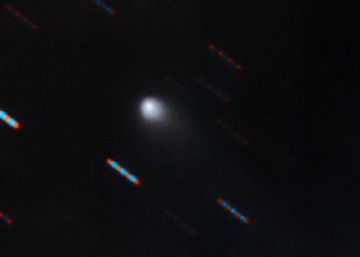 On August 30, Gennady Borisov, an amateur astronomer from Crimea (Ukraine), discovered a bright object in the night sky with the 65-centimeter telescope he himself had built. The body was surrounded by a cloud of dust and very compact gas and also showed a tail, typical signs that it could be a comet.

Amateur and professional astronomers pointed their telescopes at the new object to try to clarify their origin. On September 24, the International Astronomical Union confirmed that it was an interstellar body that came from somewhere outside the solar system. He was the second visitor of this type to discover, after 1I / Oumuamua, a missile-shaped asteroid that crossed the solar system in 2017.

The new body is named after its discoverer preceded by a figure that identifies it as the second known interstellar object: 2I / Borisov. At the moment he travels to the Sun at 32 kilometers per second, faster than his predecessor.

After studying its orbit a team of Polish astronomers suggests that the object comes from Kruger 60, a binary solar system formed by two red dwarf stars that is 13 light years from Earth. The comet Borisov entered the solar system from above, in a plane almost perpendicular to the Earth's orbits and the rest of the planets. On December 7 it will reach its closest point to the Sun, when it will be at an identical distance from the star and the Earth: 299 million kilometers. A few days later, on January 4, the comet, visible only from the southern hemisphere of the Earth, is expected to reach its peak of brightness. Then it will move away until leaving the solar system.

On September 10, a team of astronomers in Poland and the Netherlands observed the comet with the North Gemini telescope in Hawaii, and William Herschel, located on the island of La Palma, in the Canary Islands. Your observations, published today in Nature Astronomy, show that the nucleus of the comet is one kilometer in diameter. Its gas envelope is reddish, which suggests that its composition is so similar to that of native comets that it is "indistinguishable" from them, say the study authors. Due to its orbit, Borisov's comet will be able to be studied in much more detail than Oumuamua before it leaves the solar system, within about a year.