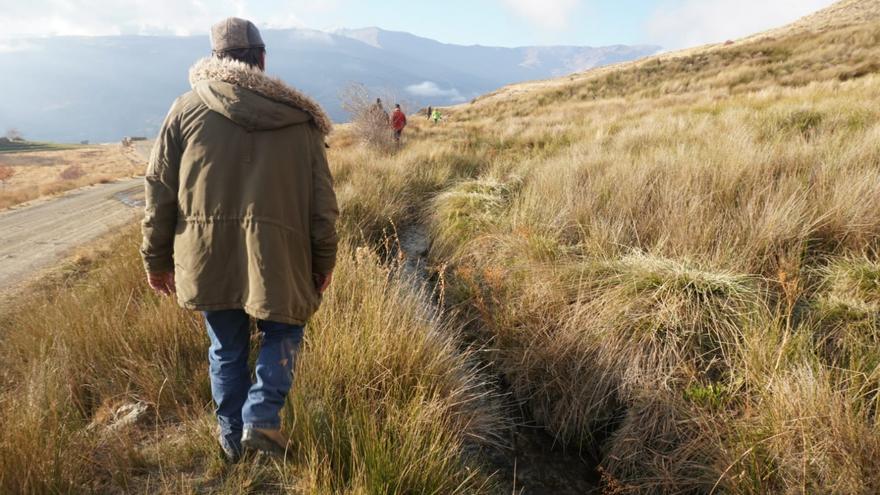 On the southern face of the Sierra Nevada, many of the ditches go down again full of water. Not all of them, but the most important ones for the farmers of Bérchules, a small town in Granada with 719 inhabitants. The traditional canals, just over a meter wide in the higher areas, run along the steep slopes guarded by junipers, junipers and pine forests. At this time of year it is already cold and that is good because, for young trees to grow, they need their doses of shade and low temperatures.

Climate change is a constant threat. Although it is clear that the mountain already has a learning with which to defend itself, the resulting scenarios with increased temperatures and torrential rains will change the ecosystems and the landscape as the inhabitants of the Alpujarra know it. The project Life Adaptamed, which has been carrying out actions in the area, has as its main objective the protection of ecosystem services in Cabo de Gata, Doñana and Sierra Nevada from the challenge posed by climate change. The interventions are based on being able to adapt the spaces instead of directly influencing the species. The recovery of the ditches is an example of the fight against the lack of water.

It is November and it is cold, although those who know the area assure that it is not as cold as it used to be. Years ago, by now, the chimneys of the Alpujarra should have been smoking non-stop. But the cold takes a long time to arrive. “All the studies indicate that high mountains are especially sensitive to climate change”, explains the professor at the University of Granada and scientific coordinator of the project, Regino Zamora. At 2,000 meters above sea level, at the foot of Mulhacén, he remembers how people, in the 60s, lived from livestock and subsistence agriculture and how they have been able to adapt to the new reality of conservation of natural landscapes and the sightseeing. Zamora believes that the mountain will be able to assimilate the new changes.

In addition, the scientist recalls, this mountain to the south of Granada is heterogeneous and that means that the climatic impacts will not affect all its corners in the same way. To anticipate and try to imagine the maximum number of possible scenarios, the Life Adaptamed project works in the territory recovering the irrigation ditches of medieval origin, a colossal network of waters devised 800 years ago by the Arabs who lived in the Peninsula with which It seeks to direct the meltwater, infiltrate it into the subsoil (sow) and then recover it when there is a shortage.

Water plays on the surface. It could be said that it almost stops to spend as long as possible running down. The channels through which it runs are barely high enough for it to continue advancing, but without any shocks. This wonder carved in the mountains needs your care, but there are fewer and fewer people with enough knowledge to keep the ditches clean. During the rural exodus, in addition to leaving valuable labor, there was a great knowledge drain that is now trying to recover. But it is not easy.

“Maintaining the ditches is essential to maintain agriculture, the forest mass and even the water that reaches the sources of the towns”, says Javier Cano, project director of Life Adaptamed in Spain.

The project researchers, together with the locals and administrations, have looked locally to find a universal solution to the problems posed by the lack of water. “Although the fight against climate change is something relatively recent, we have found a solution based on cultural knowledge and nature. It is a tool for adaptation in ecosystems, to retain water in the mountains, to host biodiversity “, says the zoologist and technical coordinator of Life Adaptamed, José Miguel Barea.

“They are Arab structures, from medieval times. Surely they have had an evolution. Some will have been buried, but new ones have also been opened. Surely some have been preserved from the beginning,” he says.

The project “is about a high mountain scrub restoration action, very focused on the Juniperus, which are junipers and junipers. Junipers, in a context of climate change, have a serious regeneration problem. The main disperser of its seeds is the black-capped blackbird, which is declining in number in its breeding places. Since the seed falls and germinates, it needs climatic conditions that are beginning to fail more and more, with dry and hot years, “warns the researcher.

Antonio Ortega is an acequiero of the zone and president of the Community of Irrigators of Bérchules. He is 58 years old and a large part of his time is dedicated to “sowing the water.” Traces of the harshness of his curious dedication come from his words, up the mountain and down the mountain. Let it rain, no matter how little, is his greatest wish because a few liters of water are capable of starting everything.

When the thaw approaches, the acequieros must have everything clean and the stone gates of the ditches ready to start sow. The goal is to turn the mountain into a large water-filled sponge to be used when needed down below, usually in the summer months. The water is directed on purpose towards a chasm or meadow in high peaks and from there it begins its channeling. The objective is to delay the fall of the water as much as possible, which is why the ditches have a very gentle slope that results in crystal clear water. This is essential so that the water arms do not “burst” because of the weeds. “The water has to be soft and that is a set of gates. If the water is cloudy, it clogs the pores of the earth.”

When the river runs dry in August, the water from the ditches is used to make crops flourish. “Upstream is where you have to do the big work,” says Antonio, who for many years worked in construction, but left that sector when it went into crisis. He returned to the field to follow in his father’s footsteps.

“At the moment in which the water begins to leave through lower areas, the flow of the streams of the rivers of medium and low mountains increases, from the sources of the towns. It is an impressive work of ingenuity from the time of the Arabs “explains Barea. “The aquifer is recharged just when it needs it most.”

In Bérchules, the careo waters irrigate about 80 hectares, the farmer calculates, there is a network of 40 kilometers of this type of ditches and there could still be more, if they continue to recover. The Adaptamed project has helped to recover eight kilometers of the 841 that the entire Sierra Nevada has.

What would happen if this network of ditches did not exist? “If this did not exist, the use of water would be much less efficient and it would be much less optimized. Because the ditches slow down and distribute the water course. In addition, they are highways of biodiversity,” says the zoologist. The Betic midwife toad, an endangered species, uses these ditches as “breeding points”.

The actions of Life Adaptamed seek to be a demonstration experience that can be imitated in other places that need similar solutions. “Acequias de carao there are only here, but networks of ditches that can be managed with these systems are in more places. And the ditches can be built,” explains CSIC researcher Luis Santamaría. “It is a solution that in principle can be extrapolated to any place where it is built, as it was originally done here.”

This adaptive management project shows that forest regeneration can be helped by working the infiltration of the slopes, “which is something that in general is not done”, recalls Santamaría. “You can make ditches or look for other techniques to promote infiltration.” “It is a very original solution that has been little explored.”