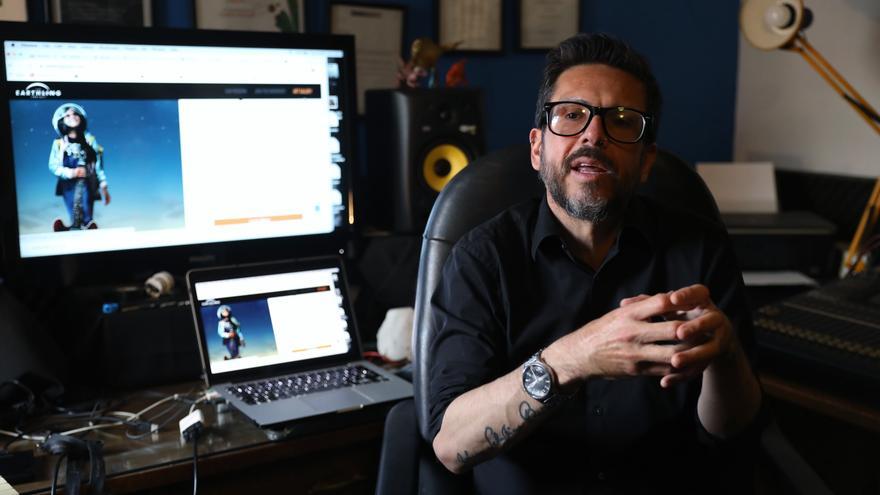 Mexico, Feb 10 (EFE) .- While the great powers continue with their space race, the Earthling project will bring voices from all over the world who want to contribute through an application to space. “It is science fiction but it is also a reality,” the Mexican composer who leads the project, Felipe Pérez Santiago, explains to Efe.

“A work is being created specifically to be sent into space. It has been done before, many agencies have transmitted specific works and compositions, but the big difference is that this is a collective work, a piece that we are creating based on the recordings that they come from people from all over the world “, reels the also conductor.

Through the application “The Earthling Project”, anyone with a smartphone and internet access can record “something that they feel represents them as a human being”, so that later Pérez Santiago includes it in one of his compositions, divided by themes, in which the voices interact with each other as if they were actually singing in the same place

“It is very exciting to hear a love song, for example, to a Mexican singer with a singer from India and another from New Zealand, and all interacting as if they were singing the same song,” explains the musician.

So far, they have recordings by users from 45 countries and the material for the first album is already sent for editing and introduction on the devices that will be released. “These first voices will go to the moon,” says Pérez Santiago.

On the next recordings other possibilities are being explored, among which is to send them to the international space station, to other planets of the solar system “or even further”.

The composer wants to emphasize the interest of the project to include voices from all possible places in the world.

TWINNING BETWEEN MUSIC AND SCIENCE

The Earthling project was born from the artistic residencies of the Search Institute for Extraterrestrial Intelligence (SETI, for its acronym in English), in which a joint work between artists and scientists is proposed for the dissemination of science through art.

Pérez Santiago was the first musician to participate in this program and astrophysicist Jill Tarter, founder of SETI, along with people like the renowned Carl Sagan, wanted to join him.

“Dr. Tarter, whom I admire a lot, told me ‘hey why don’t we do something related to music and sound that is representative of humanity?’. Something to follow up on the Golden Record,” says the musician.

The Voyager Golden Record is a gramophone record that accompanies the Voyager space probes, released in 1977.

It includes all kinds of images, drawings, photographs and music, among other things, that represent “what humanity was at that time.”

In the musical part, a commissioner was made to include classical pieces by composers such as Mozart or Brahms, but also songs by The Beatles.

The difference is that the Earthling project will bring into space a work created especially for the occasion from human voices from around the world.

And this time, the Arch Mission Foundation is making records with much more current technology.

“They are small discs made of practically indestructible nickel. They are created to survive for around 5,000 million years in extreme conditions. In them they are recording the most relevant information of this moment in images, videos, audios and also music”, says the musician.

A STOCK OF THE HUMAN SPECIES

The mission of the Arch Mission Foundation, founded in 2015, is to create multiple repositories of human knowledge around the Solar System, and even on Earth, so that they remain intact for billions of years.

In this sense, the Earthling project contributes to the creation of this collection, but it also intends that the current population can access all the recordings that are sent through the application and will soon open that library.

In addition, the works that will be sent to the space composed by Pérez Santiago from the audios of the application will also soon reach platforms such as Spotify, Youtube or Soundcloud.

Felipe Pérez Santiago found in this project a way to fulfill a dream, since since he was a child his father instilled in him a passion for science and he was always very interested in the link between art and science.

In addition to being a composer and conductor, he is a sound engineer, producer, sound artist and composed the soundtrack for the films of Carlos Cuarón, who is also Mexican, who is now preparing his latest film “Amalgama”.

see a ‘Citizen Kane’ from the anime on the big screen