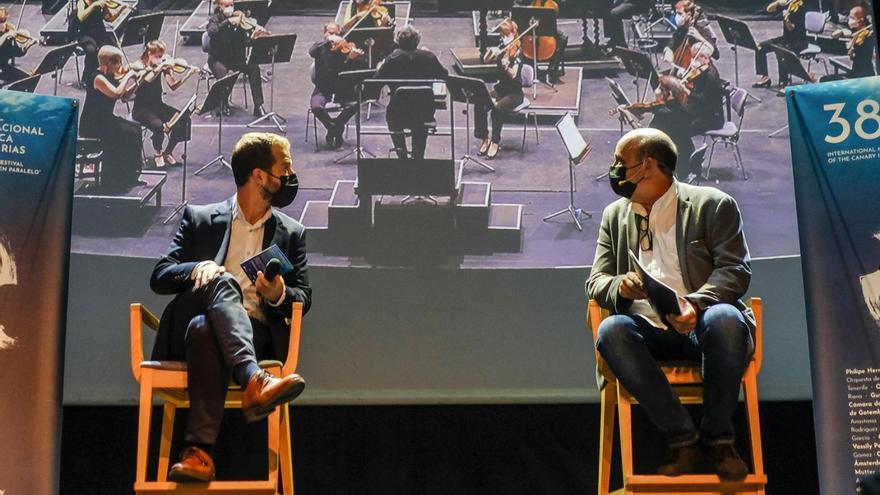 Juan Márquez hopes to gather 80% of the capacity, which is authorized right now in the Canary Islands. “An effort has been made to have 40% Canarian artists and 60% from abroad, both symphonic orchestras and soloists.” The director of the FIMC, Jorge Perdigón, divided the program into three parts: the symphonic, the chamber and parallel. “We are talking about 18 productions and 56 concerts.” For the symphonic program there will be eight orchestral formations that include this new festival proposal. “First of all, the London Philharmonia Orchestra which has had nine important principal conductors since its inception in 1945.” On this occasion he comes with the Belgian maestro Philippe Herreweghe, specialized in music from the baroque and classical period, “a wise veteran of music.” As soloist of the production “we have the British cellist Steven Isserlis who will perform Haydn’s Concerto No. 1”.

The Gothenburg Symphony Orchestra also participates in the festival, which will come after 12 years of absence. The success of the group is also due to “the great conductors of recent times, which includes the current Finn Santtu-Matias Rouvali, who at only 35 years old has already been the head of five orchestras of international rank. He has a great talent to please and excite orchestral musicians with his work. He is also a great communicator, projecting his interpretations in a very unique way, possibly due to his musical and technical ability to convey his particular reading of the work. Also Finnish, she will be one of the sopranos who will perform “one of the most beautiful works of the 20th century, Vier letzte Lieder, by Richard Strauss, Marjukka Tepponen,” said Perdigón.

As for the Russian Moscow State Symphony Orchestra, called Evgeny Svetlanov, it is defined “as the pride of Russian national music. For five years its director has been Vassily Petrenko, one of the most relevant of his generation representing the Russian School of Orchestral Conducting ». The pianist will be a talented Russian, Anastasia Makhamendrikova, only 19 years old. In the next place, it is worth mentioning that the Luxembourg Philharmonic Orchestra, founded in 1933, will attend the FIMC. Since 2015, its head is the Spanish conductor Gustavo Gimeno, “who surely has had to do with the positioning of this orchestra in the great concert halls and European festivals. It has been said that he is the best Spanish director of all time. The Italian pianist Beatrice Rana, only 28 years old, will come “with commitments of great relevance”.

The Paris Chamber Orchestra will be conducted by Antonio Méndez. It is one of the great chamber formations in the world. Violinist Arabella Steinbacher, who has already toured multiple venues, will perform at the festival. The Lithuanian Chamber Orchestra has as its conductor and baton the extraordinary violinist Sergej Krylov. “It has been said to be one of the most masterful rope formations on the planet.”

The two great Canarian orchestras will also perform. The Tenerife Symphony will be directed by the German Michael Boder, specialized in 20th century repertoire and contemporary music. As for the Gran Canaria Philharmonic, the teacher will be its owner Karel Mark Chichon and the commissioned work, that of the Grancanarian composer Dori Díaz-Jerez, with Omega, together with Mahler’s Symphony number 5. “This time there will be almost 100 musicians necessary for their performance, which could not happen last year due to the pandemic.”

On the other hand, the FIMC includes 34 extraordinary concerts, chamber concerts and the Festival En Parallel. The tenor Javier Camarena and the countertenor Philippe Jaroussky stand out. The prestigious musicians of the Camerata of the Royal Concertgebouw in Amsterdam will return and the mythical violinist Anne-Sophie Mutter, who will perform in a trio with cellist Lionel Martin and her regular pianist Lambert Orkis. The Arbós Trio will make their appearance together with the Canarian tenor Manuel Gómez. The Tenerife Baroque Orchestra will focus on a special program dedicated to Vivaldi, together with the Camerata Lacunensis.

Jordi Savall will return to the Festival. «He is one of the most outstanding personalities in the dissemination of ancient music. He will direct Haydn’s work, 7 Last Words of Christ on the Cross, a piece to which Saramago wrote a text ». The luthier and multi-instrumentalist Abraham Cupeiro will join a chamber group from the Las Palmas Symphony Orchestra. The Atlantic Jazz Lab ensemble will participate as well. The icing on the cake of the FIMC will come from the hand of the teacher and historical Russian pianist, Grigory Sokolov.

In total, the number of symphonic concerts will be 22; de Cámara, 10 and En Paralelo, 31. In Gran Canaria there will be 17 concerts; in Tenerife, 18; in Lanzarote, seven; Fuerteventura and La Palma, six, each; La Gomera and El Hierro, four and La Graciosa, 1.