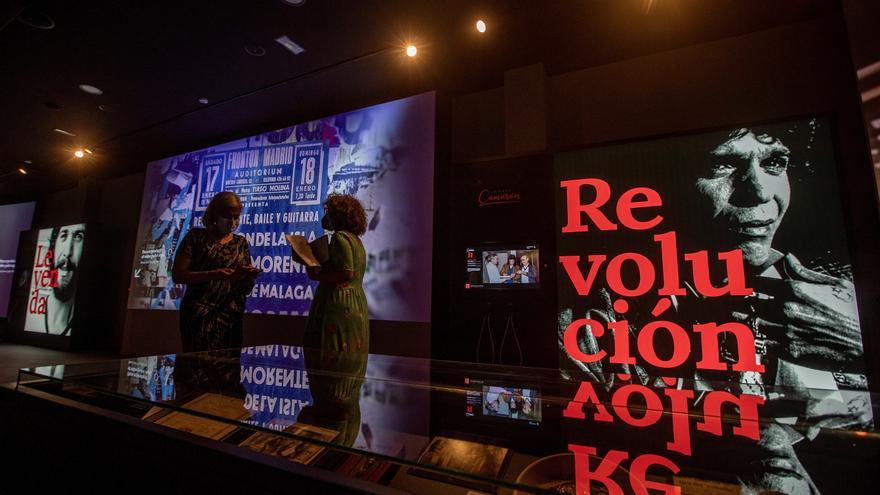 San Fernando (Cádiz), Jun 27 (EFE) .- The Camarón de la Isla Interpretation Center, a space that immerses itself in the universe of the mythical cantaor through his own voice, his image and his memories, from his clothes to his notebooks, will finally open its doors on July 2, when it is the 29th anniversary of his death.

San Fernando (Cádiz), his hometown, thus achieves the dream of giving a “true tribute” to José Monje Cruz, Camarón de la Isla, and of preserving his memory in a space at the height of the singer who revolutionized flamenco and made universal and that aspires to unite the name of the city in the same way that Graceland is linked to that of Elvis Presley or Liverpool to that of The Beatles.

IN AN EMBLEMATIC SPACE

The museum, a new and modern building, has been erected in an emblematic space, the square where Venta de Vargas is located, in which Camarón, when he was just a child, began to forge his voice and enchant with his singing which over the years has been the pilgrimage center to which thousands and thousands of followers from all over the world who came to San Fernando in search of traces of the singer have gone.

Almost three decades after his premature death from cancer, on July 2, 1992 in Barcelona at the age of 42, Camarón de la Isla, that shy cantaor who was maddened by being deified, opens wide in this space that covers from its origins, its legend and its revolution, the three sections in which the journey by its legendary figure has been divided.

FROM YOUR CAR TO YOUR SHIRTS

With an investment of four million euros, supported for the most part by the Junta de Andalucía, the museum has countless personal objects of the cantaor.

In 2014, his family gave some 400 personal memories to the San Fernando City Council in exchange for 2,500 euros per month. It was the first step with which the city began to design this project, which will be inaugurated on the 2nd and which will begin to receive visits by appointment on the 6th.

The white mercedes of Camarón welcomes museum visitors to a journey that has been articulated by great connoisseurs of his figure, including Juan José Téllez and Enrique Montiel.

FROM THE ORIGINS TO ITS REVOLUTION

The journey begins on the ground floor at the origins of José Monje Cruz, with photographs and videos, among other memories, that testify how he grew up listening to his parents’ ancestral flamenco and his passion for the world of bullfighting or the guitar.

As he himself said, “he went with the hobby of being a bullfighter, but he found it easier to be a cantaor”.

Photographs of a child shrimp dressed in a suit of lights are interspersed with photographs in which Fernanda de Utrera played the guitar.

The itinerary then continues on a second floor where large screens project audiovisuals in which it has been deliberately sought that Camarón himself was the one who, with his voice, recounted how that child became the greatest myth of flamenco.

Thus begins the walk through the construction of the “Legend”. A path that began when, with his suitcase and his shoes, Camarón went to Madrid in the 70s to experience the golden age of flamenco tablaos and there he met Paco de Lucía. The “enigmatic energy” emerged between them that made them together “the wound and the medicine”, in the words of Félix Grande.

Along with the audiovisuals, countless personal objects that portray his family life, with images of his three-day wedding with Dolores Montoya, la Chispa, and their children follow each other in showcases; the collection of canes or his passion for instruments, from his organ to his guitars, his gramophone or his reel tape recorder, a sample of that silent researcher that Camarón was and that made him want to record everything and listen to the cantes of law and music. reverse to decipher the mysteries of cante.

The journey continues in the “Revolution”, which Camarón de la Isla undertook when he separated from Paco de Lucía and began to fly alone and dare to open a path of innovation in flamenco that would raise his legend to the category of myth.

His coats, shirts or sunglasses show in the museum how Camarón was, without trying, a trend-setting icon in his time.

His handwritten notebooks and diaries, or his briefcase, bring a man who liked to write down everything, and his Bible remembers how religion weighed on his spirit.

The museum does not shy away from the shadows of the character. This includes documents such as newspaper clippings about the process in which he was accused of a traffic accident in which two people died or an interview in which he confessed that he realized that he had to stop his relationship with drugs when his His son told him when he came home from school: “Dad, they told me you’re a drug addict.”

His awards, gold records and cassettes, and his Llave de Oro del cante, which he was awarded in 2000 posthumously, conclude a trip that offers, from a giant jukebox, the possibility of listening to his cante or, from a sort of modern photo booth, to take a picture with him.

The museum also has a space for children, for researchers and to hold events, to make it a space as alive as the legend of Camarón.

His widow and her family were the first people invited to the inauguration.

The San Fernando City Council considers resolved the litigation by which last December the heirs of José Monje Cruz announced legal actions against the consistory for “illegitimate interference in the use of the Camarón de la Isla brand”, and that finally the expected museum may open its doors.