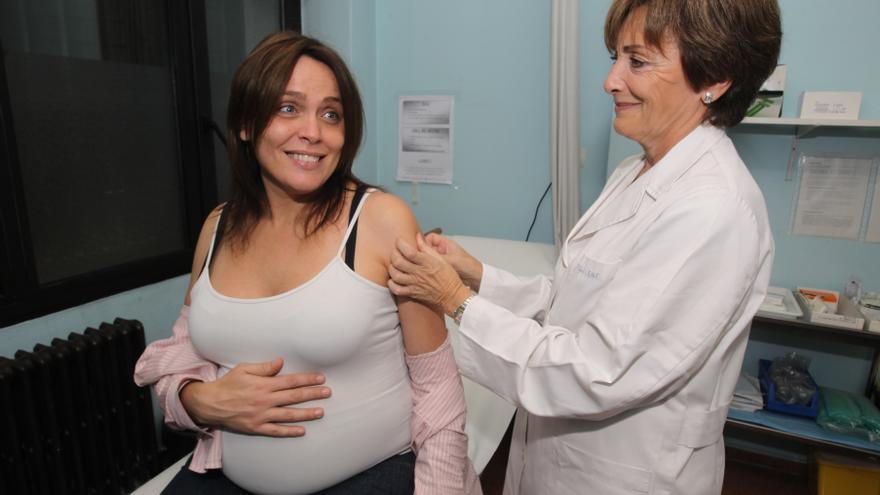 The coronavirus has marked one more year the first births. As with 2021, the restrictions that prevail by the pandemic in hospitals have been an anomalous situation in these first births, since visits are not allowed in the centers and parents must undergo an examination test diagnostic.

In this sense, Erick's mother, the second baby born in the Canary Islands, gave positive in Covid-19, after performing a PCR at the time of hospital admission. Both the baby and the mother are in good health. However, she, who is asymptomatic, has wanted to launch an awareness message so that the pregnant I know vaccinate, "Protect themselves and their babies" from the effects of infection.

On the 30th, a study was released by researchers from Weill Cornell Medicine and NewYork-Presbyterian, in the United States, which suggests to pregnant women that they should not delay vaccination against Covid-19 until the end, so encourages them to be immunized during the gestation period or even up to six weeks before becoming pregnant, in order to protect themselves and the baby throughout their pregnancy.

According to the researchers, vaccination against Covid-19 of pregnant women produces levels of antibodies against the foreign protein Spike of SARS-CoV-2 at the time of delivery that do not vary dramatically with the timing of vaccination during pregnancy. Therefore, they do not justify the delay in vaccination.

The study, published December 28 in Obstetrics & Gynecology, looked at how antibody levels in the mother's blood and the baby's umbilical cord blood varied at delivery with the time of prior vaccination by nearly 1,400. women and their babies.

The researchers found that levels of these antibodies at delivery tended to be highest when the initial vaccination course occurred in the third trimester.

However, they also found that antibody levels at the time of delivery remain comparatively high, and probably also protective, when vaccination occurs early in pregnancy or even a few weeks before it, and a booster vaccination at the end of the pregnancy. Pregnancy can make those antibody levels much higher. «Women often wonder what is the best time to vaccinate their baby; our data suggest it is now, ”said Dr. Malavika Prabhu, associate professor of obstetrics and gynecology at Weill Cornell Medicine.

The US Centers for Disease Control and Prevention recommends vaccination against Covid-19 for pregnant women. Additionally, previous studies suggest that Covid-19 tends to be more serious for women when they are pregnant, and increases the risks of preterm labor, stillbirth, and other adverse outcomes for their babies.

Thus, vaccination against Covid-19 protects pregnant women from severe Covid-19 and generates antibodies that cross the placenta and circulate in the blood of their babies after delivery. Studies of the most widely used vaccines have not found an increase in adverse side effects for mothers or their babies.

Dr. Prabhu and her colleagues set up the new study to address the question of the best time to vaccinate with Covid-19 during pregnancy. The analysis included 1,359 pregnant women who reported having been vaccinated against the virus during or up to six weeks prior to pregnancy, and who delivered at NewYork-Presbyterian / Alexandra Cohen Hospital for Women and Newborns after 34 or more weeks of gestation.

They found that the antibodies were generally detectable at the time of delivery, in maternal blood and umbilical cord blood, among all fully vaccinated women, regardless of the timing of their first dose of vaccine.

Among women with no history of SARS-CoV-2 infection who received both doses of the Pfizer or Moderna mRNA vaccine, antibody levels at delivery were lowest after pre-pregnancy vaccination or in the first trimester and the highest after vaccination in the third trimester. However, the difference was not great. There were no significant differences in the levels of antibodies against the protein Spike based on timing of vaccination among those who received the single dose of Janssen.

Among those vaccinated with a history of Covid-19 infection, antibody levels in maternal and umbilical cord blood at delivery were moderately higher on average, showing an even lower decline with the time of vaccination. early.