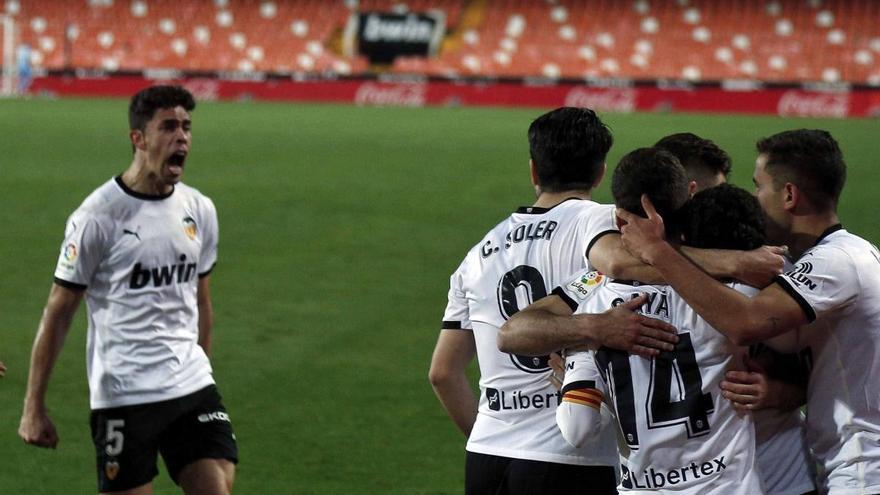 The Valencia came back with a goal in the 86th minute and another in the 91st against the Villarreal (2-1), in an emergency duel for both teams in which the locals found a balm to their problems and visitors severe punishment.

The dominance of Valencia contrasted with the game of Villarreal, who, without imposing his rhythm, had the clearest chances of the match.

Villarreal ruined the possibility of a victory that he practically had in his hands and a good fault for it was Jesper Cillessen, the Valencia goalkeeper, who made several worthwhile saves.

A penalty transformed by Gerard Moreno Five minutes before the break after a hand from Gayà that the referee checked at the request of the VAR, he advanced Villarreal, but a penalty by Moi Gómez on Maxi Gómez led to the 1-1 transformed by Carlos Soler before a great left foot from Guedes in the extension will leave the points in Mestalla.

After a good start from Villarreal, Valencia soon took over the match, although without clearly reaching the goal of Asenjo despite starring in some good penetration by both bands, especially on the left.

Faced with the greater presence of the locals, Villarreal tried to propose a more elaborate football, although without taking control of the game.

Thus, when they had played 35 minutes, almost nothing had happened, since all the excitement of the first period was concentrated in the final moments from an arrival of Villarreal, who had not approached Cillessen for many minutes, in which Gayá and Paulista both avoided the goal when the local goal was beaten.

The goal came immediately, after a hand from Gayá in a header. The ball hit him on the back of one arm when he was on his back. The referee reviewed the play, whistled a penalty and Gerard Moreno beat with a low shot and placed the local goal. Shortly afterwards Cillessen neutralized a shot from Alcácer with one foot.

The match reached its equator with better game and few chances for the locals, but with the clearest goal options in favor of the Castellón team.

Villarreal started the second half with Pedraza for Estupiñán and Trigueros for Alcácer against a rival who was offensive in pursuit of a draw and against whom the visiting team was solid in defense.

Valencia’s possession of the ball was not accompanied by clarity in the face of goal and opened possibilities for Villarreal to create problems for the counterattack, so the duel took place between the lack of local depth and the little output of the visitors, although at minute 65 Cillessen again made a great stopa in one of the opponent’s few approaches to his goal.

Valencia intensified their dominance, sent a ball to the crossbar and as the minutes passed he managed to get his rival into his field, although in each exit of the visitors there was danger from a Cillessen who made very worthwhile stops.

Very close to the end came the tie for the locals, which did justice to the merits of both teams, but in a Guedes share, who returned to play after not counting in the last matches, the balance was uneven in favor of Javi Gracia’s men.

Incidents: match played at Mestalla without an audience.