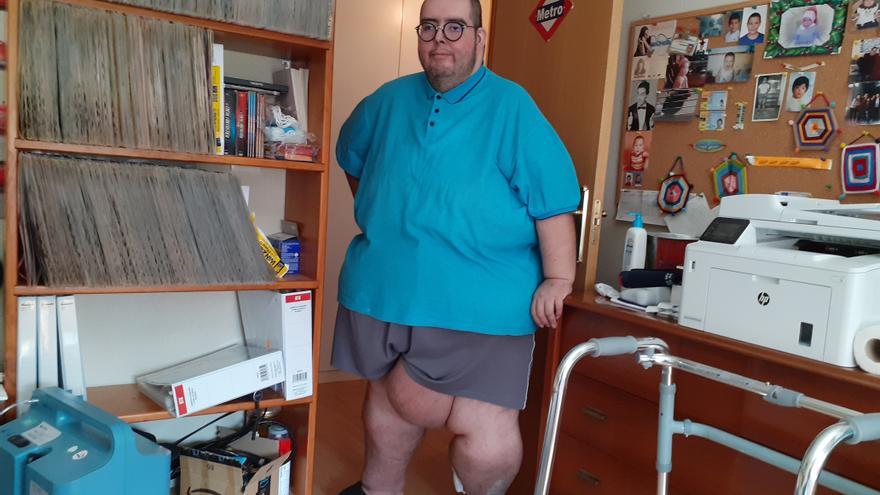 Raúl Andrés González Salas is 43 years old and suffers from morbid obesity, a disease that has caused him endless health problems that he has endured for years with resignation and thanks to the help of his father, who is his main support at the moment as he is who cares for you at home since you were appointed your guardian by granting the Dependency Law. In mid-August of last year, Raúl’s left thigh enlarged, which prevented him from walking and leading a normal life. And there began his pilgrimage.

“At the San Sebastián de los Reyes Hospital – where he resides – they told me that I had no possibility of having a CT scan because there was no device to support my weight, which exceeds 200 kilos,” explains Raúl. But worst of all was that, according to what he says, he did not get any bariatric ambulance, that is, especially for people with this type of obesity, to take him to take the tests that the doctors asked for. “They sent me normal ambulances and, when they saw me, the orderlies themselves gave up trying to transfer me in them due to my weight,” he says.

Because of this, he has missed several medical appointments and to which he has been able to attend he has done so “in the best way” he could, “sitting in collective ambulances, which have several seats inside,” he explains.

Faced with this unexpected ailment in his thigh, Raúl went to the hospital but, according to his account – and accredited with the corresponding medical reports – after a first examination they told him to go home and they prescribed paracetamol and little else. Two days later he returned to the emergency room in great pain, and they gave him a strong pain reliever that, as he recalls, made him dizzy. Again they prescribed paracetamol. Raúl is finally referred to Gregorio Marañón since in that center they do have weight-bearing devices for testing.

Despite this, to his despair, he then sees how his appointments to undergo surgery are delayed for what is finally an unexpected tumor on his thigh. “They sent me letters informing me that appointments were being canceled, without further explanation. Seeing that everything was paralyzed, my father, faced with my delicate situation, began to look for other hospitals that have machines suitable for my size and weight” . As he recalls with indignation, they even told him that “your son can be treated at the Veterinary Hospital where they have adequate machinery.” As a result of so much waiting, at the end of this month of July he suffered a pulmonary embolism that affected his heart, a condition for which he is currently being treated.

According to Raúl, all the complaints presented by him or by his father in Patient Care in various hospitals in the Community of Madrid due to the lack of bariatric ambulances have ended in the same way: “They told us that they were sorry but that those ambulances were not are operational “. He only has in his possession in writing one of those complaints dated July 28, which, according to him, he made himself online through the SUMMA platform. “The rest were put by my father, who was denied the receipt that the complaint had been filed.”

This summer, tired of everything, decided to make his case visible on Twitter, and report his situation.

This led to the councilor of Podemos in San Sebastián de los Reyes, Juan Angulo, writing to him to inquire about his case. “We met Raúl’s family when they contacted me about the problems they had to find an operating room authorized to operate on him. At that time, and of course, also in his current claim about the lack of bariatric ambulances, we wanted to accompany him in his fight looking for solutions and contacting unions of health personnel, with the Health Platforms of the North Zone, as well as with our representatives in the Autonomous Parliament and the media, “Angulo tells this newsroom.

“We understand that the Madrid public health system has a political enemy in the Autonomous Government of Ayuso, who does not believe in strong institutions capable of guaranteeing the quality of essential services in our region,” he adds, while denouncing that “in San Sebastián de the Kings, Tower 4 of the Infanta Sofía Hospital is still closed in the middle of the pandemic, the Dehesa Vieja health center is the eternal electoral promise that never materializes and the Primary Care Emergency Service continues to be closed. “

From the North Zone Public Health Platform they corroborate Raúl’s complaints. A spokesperson for this group affirms that they have been “years denouncing the disastrous operation of the Ambulance Service for the daily transport of patients. There have been unjustified and unjustifiable delays, but, in the case of Raúl, it is still more serious than the Community of Madrid, governed by Mrs. Ayuso, who boasts of having the best Public Health in our country and who builds ‘Hospitales-Platós de Televisión’ like Isabel Zendal, is not able to guarantee the necessary transfers this patient to health centers, essential to diagnose and treat their health problems. “

Miguel Ángel Rodríguez, spokesperson for this group, also believes that the municipal government of the San Sebastián de los Reyes City Council, currently governed by the PSOE and Ciudadanos, “should be forceful when it comes to defending the rights of its neighbors with respect to to Public Health before the Government of the Community of Madrid, but in this case, as in others that affect the entire population of this city, it only shows electoral marketing and no real action “.

Also the endocrinologist who has been monitoring his disease and treating Raúl for many years, Dr. Miguel Ángel Rubio Herrera, vice president of the Spanish Society of Endocrinology and Nutrition (SEEN), has given him support in his struggle to achieve bariatric ambulances. The specialist admits that there is a general health problem due to the lack of special devices for this type of morbidly obese patients. And he believes that it is necessary to make a call for attention in this sense, “not only because of Raúl,” he points out, “but because of this group of people who, although not very numerous, find themselves, like him, with many difficulties to be attended to.” Dr. Rubio Herrera refers not only to bariatric ambulances, but also to special wheelchairs, operating room stretchers, machines to perform CT scans or MRIs that support extraordinary weights, scales, and even simple devices to take the tension of these people since those that habitually are in the consultations do not include their arms.

In fact, due to all these deficiencies, Raúl’s life has not been and is not easy due to his overweight problem, a disease that has dragged on since he was a child and suffered by his mother and two sisters, although his case is the most serious. Many years ago, in 1997, he underwent surgery for a stomach reduction that somewhat alleviated his problem, reaching 120 kilos. But gradually he regained what he lost and even surpassed the previous 200 kilos. Between 2019 and 2020 Raúl was treated with Saxenda, a new drug that helped him lose weight again to 175 kilos. But “the pandemic, the closure of the operating room, and the loss of supplies of medication have conditioned a weight gain to the previous situation,” as explained in one of the last medical reports. His mother also had the same operation a few days ago. He is home now. Their father is the one who takes care of both of them despite the fact that his health is also delicate due to the fact that he suffers from liver cancer.

Raúl does not hide his image and tells about his life and all the vicissitudes he has suffered. He assures that he receives only 268 euros per month due to the Dependency law. That money came to buy a walker and little else. Their house has an adapted bathroom that they had to pay for with the help of the family. Nobody is going to help them home. “I only entrust my life to my father and to the drivers and assistants of SUMMA112, the workers who are in direct contact with the citizen. I hope that what is happening to me will not happen to anyone else,” says Raúl.

In the Ministry of Health they refer to this wording to SUMMA 112, where an authorized spokesperson assures that “the patient who is cited – in reference to Raúl González – so far in 2021, has had 20 transfers, on a scheduled basis, for consultations in the Hospital “. “We only have one incident on 7/19/21 because, by mistake, a” normal “and non-bariatric ambulance was initially sent. The rest of the transfers have been made in the bariatric one.” “There are no complaints from patients for the reason of transfer by bariatric ambulance,” he adds.

However, one of the claims was presented by Raúl himself on July 28 and in it he complained that two days before he had been unable to get a bariatric ambulance: “I was never paid attention to those specifications and they sent me normal ambulances” . That day, as he recounts in the report, “the base had to be called again to send me the appropriate ambulance, but it took about two hours or more to carry out the management so as a result I missed two very late appointments. important “. On July 26 “they even called me to tell me that there are no ambulances for me and that I shouldn’t expect any.” “The discrimination that I am suffering because of my physical appearance is really shameful,” he laments in his complaint. After this story, Raúl requests, as can be seen in the claim, “the investigation of his base center, which is where the ambulance orders originate.”

These same sources acknowledge that “the transfer of patients with morbid obesity is infrequent and they are usually well recorded in the requests, so there are no problems in this regard, except when access to the home is very difficult (due to the size door or stairway). In these cases, whether scheduled or urgent, firefighters support is requested. ”