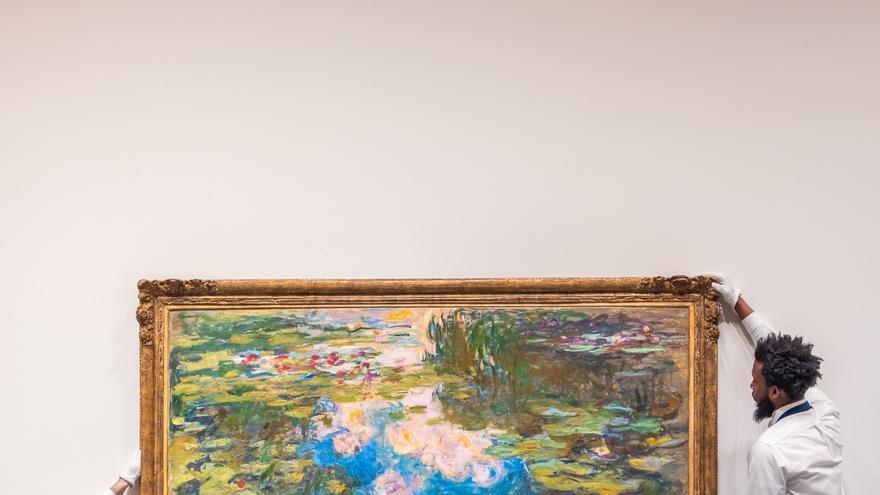 A painting from the famous series of water lilies by Claude Monet was the star of the night in a Sotheby’s auction held this wednesday in New York, where reached $ 70.3 million, substantially exceeding the expectations of the experts. ‘Le Bassin aux nymphéas’, painted between 1917 and 1919 by the French, is considered “one of the most exceptional paintings by Monet to hit the market in recent history”, for which it had been given a value of about 40 million dollars, a figure that was already exceeded in the third bid.

One meter high and two meters wide, the oil It is one of the pieces that is part of the revolutionary work of the last years of the icon of Impressionism, which inspired the following generations of painters.

The battle for a Picasso

A few minutes later, a portrait painted by Pablo Picasso by Françoise Gilot, who was the artist’s muse and partner for a decade, sold for a hammer price of $ 18 million, which rose to $ 20.9 million after adding fees and taxes. ‘Femme assise en costume vert’ was the clear object of desire for two buyers, one of whom was bidding from Sotheby’s New York headquarters and the other from Hong Kong, who duel over a painting that was not up for auction for 35 years. The piece belongs to an exceptional group of paintings that the Spaniard created during the winter of 1952 and the spring of 1953, during the time when Picasso and Gilot lived together with their two children, Claude and Paloma, in the villa “La Galloise in Vallauris “, in France.

They were sold in addition to Picasso the charcoal and pastel drawing ‘Tête de femme’ for $ 1.08 million, the pencil drawing ‘Quatre nus à la colombe’ for $ 1.04 million, and another pencil drawing, ‘Trois nus debout et personnage’ , for 1.47 million dollars, all of them within what the experts expected.

In an auction that lasted about four hours, in which Sotheby’s decided to sell the works of contemporary art and those of impressionist and modern art in the same night, the American of Haitian origin also stood out. Jean-Michel Basquiat, one of the most appreciated artists of the moment.

Basquiat continues with his good streak

His ‘Versus Medici’, which was valued between $ 35 and $ 50 million, sold for $ 50.8 million, slightly exceeding expectations. It was the first time that the painting went on sale, since it had been painted by Basquiat at age 22 and was bought in 1982, the same year it was executed, by the collector Stephane Janssen, one of the loyal fans. of the painter since its inception and who died in 2020.

In recent years, the popularity of Basquiat has continued to grow among experts in art and billionaires, since in 2018 $ 110 million were paid for ‘Untitled’ (1982) at a Sotheby’s auction, the record for a work by the artist, while this Tuesday ‘In This Case’ was sold at Christie’s for 93, 1 million dollars.

Although at a much more modest price, the ‘Portrait of Columba Domínguez de Fernández’ by Mexican Diego Rivera was very well received by collectors, doubling the maximum price that Sotheby’s had awarded, 3 million dollars, when it reached an amount final of 7.4 million, which makes it the second most expensive painting by this artist.

‘Untitled (Rome)’, by the American Cy Twombly, was another of the jewels of the night, since it was released at auction and was executed in 1970, considered the artist’s chronological peak, but this “blackboard painting”, with White writing scrawled on a dark surface only came to a final price of $ 41.6 million, below the estimated maximum.

One of Paul Cézanne’s last still lifes in private hands, ‘Nature morte: pommes et poires’, could be considered the “bargain” of the auction, selling for $ 19.9 million, despite the fact that Sotheby’s had given it a value. between 25 and 35 million dollars.

The work of the Spanish Joan Miró ‘Peinture’ did not have its best night either, selling quickly for $ 12.6 million, slightly exceeding the estimated minimum price of $ 12 million.

Meanwhile, the British graffiti artist Banksy did succeed with his ‘Love is in the Air’, for which a fierce battle of almost 15 minutes between two different buyers bidding from Hong Kong and another from the New York headquarters, which raised the hammer price to $ 11 million, or $ 12.9 million by adding fees and taxes. For this particular piece, Sotheby’s accepted payments with the cryptocurrencies Bitcoin and Ether, the first time that a leading art auction house has supported this type of currency.