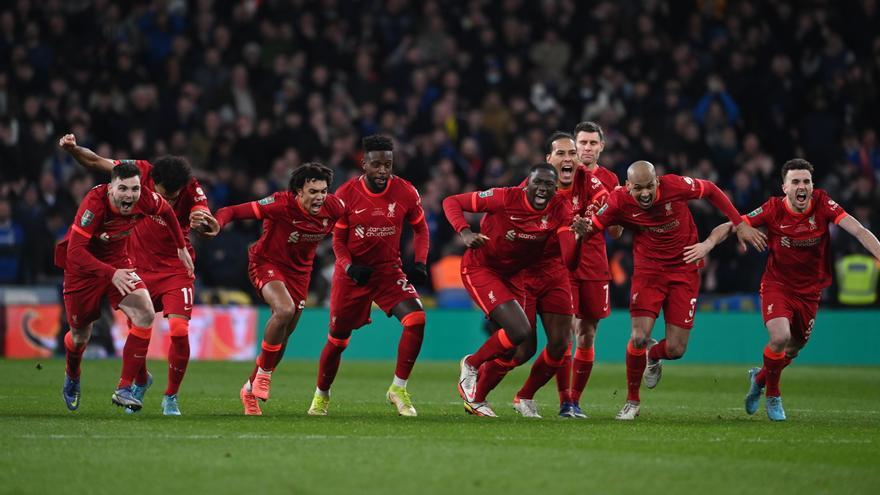 After four goals disallowed, one of the best 0-0 in recent years, an extension and a penalty shootout with 22 shots, the Liverpool he was the last gladiator standing at Wembley and lifted his ninth League Cup after failing Kepa the last penalty of the shootout (0-0).

Once again Wembley was the scene of misfortune for Kepa, who here starred in one of the worst moments of his career in 2019, when he refused to be substituted in the final of this tournament, which he also lost in extra time. Football was unfair to the Spaniard, who came out to play the penalty shootout and after 21 pitcheshe failed the final giving Liverpool its first cup since 2012.

The match was one of the best 0-0 in memory. Electric, with many alternatives and, above all, with too many failed occasions. For the two teams, who were stunned to see how, despite countless attempts, they were unable to unbalance the scoreboard.

The bug carousel started it Christian Pulisic, who crashed into Kelleher all alone after a great pass from César Azpilicueta. There the attacker made a mistake, quite the opposite of Liverpool's response, when Edward Mendy showed why he started ahead of Kepa Arrizabalaga. The Senegalese cleared a shot from the edge of Naby Keita, the rejection was loose, Mané arrived with everything in his favor and the goalkeeper, in an effort from the ground, repelled the ball. Spectacular. One of the stops of the season.

Mendy's save could have been even better if his teammates had been more accurate, especially MasonMount, that he had in his boots the following two occasions.

The English midfielder missed a volley in front of the area, very clear, and a one-on-one in front of Kelleher who threw the stick. Surrealism and disbelief for Mount, who could not have had two better balls to overtake his team.

Chelsea left Liverpool alive and they celebrated the 0-1, temporarily. In an unnecessary lack of Mark Alonzo, Klopp's board shone. Alexander-Arnold hung it at the far post, Mané only finished off a dive, and Matip, at the opposite post, pushed the ball. Liverpool's celebration began and the VAR appeared, which, after a few minutes of doubt, decided to annul Virgil Van Dijk's offside goal, who did not touch the ball, but with his movement caused the defender to chase him and not Mane. The Dutchman did not believe it.

With Salah very much gone, the 'Red' threat was Louis Diaz, who played a great game at Wembley and was able to crown it with a goal that Mendy took from him. The Senegalese goalkeeper withstood him one-on-one and cleared the Colombian's shot attempt. Diaz was a catalyst for Liverpool's momentum, coming much better down the stretch and forcing Mendy to pull off one miracle after another. The hand that he took out to headbutt Van Dijk at the discount it was from another galaxy.

The madness was such that Chelsea almost won the final with a shot from Romelu Lukaku in the 95th minute.

The Belgian had a goal disallowed in extra time Havertz, another, to confirm that this meeting was predestined to go to penalties. Tuchel, in the last minute of extra time, trusted Kepa Arrizabalaga, experts in batches, and removed Mendy.

The level of the meeting did not drop and the twenty-one first pitches were all inside.

Kepa, who this season gave Chelsea victory in three penalty shootouts, one in the European Super Cup and two in this competition, he was the villain. His penalty, number 22, went over the crossbar.

Ninth League Cup for Liverpool, which stands out as the team with the most titles, one more than the Manchester City.