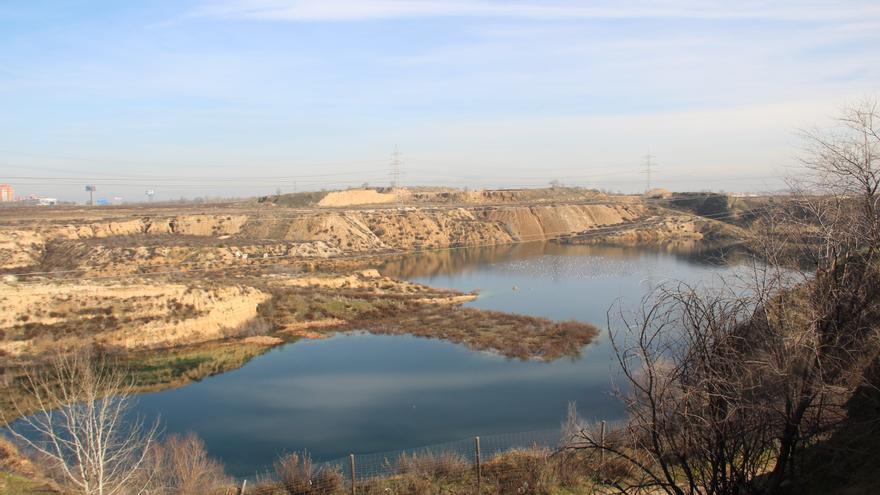 The quarry, inactive for 14 years, has become an unthinkable refuge for birds in Madrid. Flooded with water after the end of excavations in 2007, the hole left by thirty years of sepiolite mining in the east of the city is now a sanctuary for hundreds of species, some threatened. However, the prospect of draining the field is one step away from destroying this green bubble. On one side of the scale, a burst of biodiversity. In the other, accessible mineral worth almost 40 million euros.

The so-called Laguna de Ambroz is within the municipality of Madrid. About 500 meters from a couple of metro stations and 270 from residential buildings. It was formed when the quarry was filled with water once the concession expired. Birds rest, thrive, and feed. The vegetation has grown. The insects fly over it. But the Tolsa mining company, which has not wanted to offer its vision on this matter, does not give up the thousands of tons of material that, they estimate, still await in the veins below the Ambroz bed and its surroundings. After almost three decades without activity, there is hardly an administrative procedure to obtain the permit and reopen the exploitation. The water will be removed. The lagoon will disappear and, with it, life.

“We believe that it has enough values ​​to keep it as it is”, says Alberto Remacha, SEO-Birdlife technician, while walking, binoculars around his neck, around the sheet of water that covers about eight hectares in the extreme east of the great city. The Spanish Ornithological Society (SEO) is conducting a species census to justify that the excavators do not return.

Ambroz illustrates a constant tension between mining production and ecological preservation. A dispute that has been accelerated in recent years in Spain by the mining resurgence that is taking place in the face of new demands and rising international prices. Cases like the uranium mine project in Salamanca, that of lithium in Cáceres, the revival of the sector in Riotinto (Huelva), whose environmental permit had to be annulled by justice, or he finally copper plan rejected in Touro (Galicia) have been marking this process. New technologies portend more confrontations of this type: the importance of rare earths or battery components for the electrification required by the end of the fossil fuel era will make it very difficult to hide this debate.

But, in the Madrid lagoon, while Remacha tells how the birds themselves have carried fish eggs and other animals that now feed on coots, jars, grebes or ducks, a band of gulls that have attached to their legs. It rests floating in the lagoon and suddenly takes off. “Look! There you are right: a marsh harrier.” It is a raptor inscribed in the Madrid Catalog of Threatened Species. “Did we have it?” “No”. It is the 116th different species whose presence is certified by SEO-Birdlife.

The Ambroz lagoon has been formed in the mining pit (the hole created by the excavation) that Tolsa made to extract sepiolite, a special clay used as an insulator of which Spain is the only producer in the European Union and Madrid its main focus. Its thirty-year concession expired in 2007. The company wanted to continue mining, but the extension process has been prolonged due to the detection of flaws in the project that caused successive “rectification requirements.”

With the passage of time, the short has flooded. With the water came the birds, who could rest. And the vegetation. And more fauna. And predators of wildlife. An entire ecosystem, arisen in an old mining field. However, in 2019, the Department of the Environment of the Community of Madrid granted a environmental impact statement (DIA) favorable to the project. Now only the signature of the Department of Mines remains. In the Environment resolution it is said that the project does not invade any protected natural area. In this case, it can be said that the space has sprouted.

For the Ministry, the land is “an operation already in operation (…) that has not received restoration work,” according to the DIA. This declaration has put a series of conditions to give the go-ahead, but has not denied the project.

The objective of the Tolsa miner is to resume sepiolite extraction. Rush the deposit for 11 more years. They estimate that there are still 368,984 tons of ore left. Its plan consists of removing 33,544 tons per year, which is equivalent to 5.86% of all the average annual production in Spain. That amount has a value of 3.6 million euros, according to data from the latest Mining Statistics of Spain of the Secretary of State for Energy.

The company assures that its total budget to extract all the sepiolite that remains in this concession will amount to 4.9 million euros. That is, 13.42 euros per ton. In 2018, each ton of sepiolite was valued at 107.7 euros. With this value, the deposit will offer the company revenues of 39.7 million euros. The accounts are clear: the water has to be drawn to access part of the mineral and use it for other mining purposes. The company considers the lagoon a pond that is filled with the rainwater that runs there. They claim that the water table is 35 meters below the Ambroz bed.

“They have the papers, it seems all legal, but it does not fit in the head that it is intended to allow an exploitation of sepiolite in the metropolitan area at this point in the 21st century, but so much money is moved …”, analyzes Mari Ángeles Nieto, from Ecologists in Acción, an organization that has requested a review of the environmental procedure because public information was not provided on various modifications of the project.

This lagoon, born by accident, can be reached on foot from several metro stops. They are only slightly more than 500 meters in a straight line. The road is not pleasant because the track is traveled by trucks. But, upon reaching the water’s edge, the panorama is transformed. Colonies of sapper aircraft, a bird recognized as “of special interest”, have formed on the slopes created by the mine. Also bee-eaters. Flocks of goldfinches fly. The red duck swims. During the half-day in which SEO members showed elDiario.es the lagoon, they registered 37 species of birds.

“What is that?” Asks the journalist. A telescope appears to certify a finding: perched on some bare branches a royal shrike is drawn, another variety with the official classification of “interest” in the Catalog of Threatened. At the same time, a red kite flies overhead. This species is considered “vulnerable” in the official list of the Community of Madrid.

The lands affected by this mining project, and where the lagoon has been created, “are classified by urban planning as ‘non-programmed developable land’, so that in the future uses may be required that require their construction,” as certified by the DIA signed by the Madrid’s community. The City Council of the capital has warned that it is initiating the modification of the General Plan for that area.

In other words, this document validates that, once sepiolite exploitation is abandoned, these soils can be urbanized, although it is true that it has not been decided exactly what these hectares will be dedicated to specifically. What is certain is that, if the lagoon were saved, a good chunk of surface would have ceased to be urban. In fact, in 2018, the Madrid City Council approved promoting the restoration and conservation of the Ambroz lagoon. The proposal was based on a citizen initiative and had the support of all political groups. The panorama has changed a lot in just three years, but the birds have not heard about it.