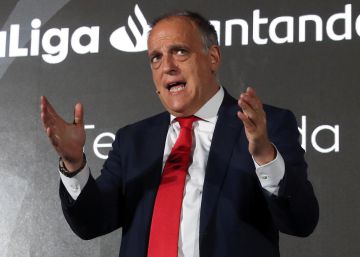 LaLiga and the Spanish Football Federation signed a minimum renewal of the coordination agreement hours before the date set for the draw for the next season's First and Second Division calendar (this Thursday, 13.00). The most thorny issue of negotiation was left out of the agreement, the games of Mondays and Fridays. After months of meetings and mediation by the Higher Sports Council, the pact on this aspect has been impossible for now.

At the last meeting at the headquarters of the CSD, in the presence of its president María José Rienda, neither Luis Rubiales nor Javier Tebas, top leaders of the Federation and LaLiga, respectively, attended. The old agreement expired on June 30 and the new agreement is valid for five years.

The white smoke has been reduced to the new format of the Copa del Rey and the Spanish Super Cup (The employers have already announced the withdrawal of the complaints filed in the National Court for the change of format), the commercial exploitation of the ball (the next campaign will be Puma after 23 years of Nike), the naming (call the First Division, Santander League, and the Second, League 1, 2, 3), the powers of the schedules of meetings, or the management and authorization of advertising. In September 2018, the federation warned that it intended to regain control over these sections, which exacerbated the conflict between both parties.

The calendar that will be drawn this Thursday will again be asymmetric, that is, the order of the first round will not be that of the second. Real Madrid, Valladolid, Eibar and Real Sociedad requested not to play at home in the first three days for works in their stadiums. The competition will begin on August 18 and end on May 24, 2020.

The confrontation, nevertheless, continues open by the party of Mondays and Fridays. The starting point of the Federation was always to suppress Monday football. "It's bad for everyone, especially for fans and footballers," Rubiales said. In return, offered to extend the hours of Friday, but receiving more money. In his opinion, the 3.3 million (4.2 with IPC updates) that the federation of LaLiga receives every year on Fridays and Mondays "are light years away from what they are worth". The Federation asked LaLiga to specify how exactly it takes profit from the meetings of these two days to adjust the contract economically, but Tebas has not given it.

During the negotiations, the body chaired by Javier Tebas highlighted before the CSD, and even advertised in advertisements in the press, which contributes 65 million euros to the Federation and this amount is the highest among the European professional leagues. However, Rubiales also defended that the figure is unreal because to the federative accounts only the money reflects on Mondays and Fridays, and that the rest is distributed between professional clubs and amateur football.