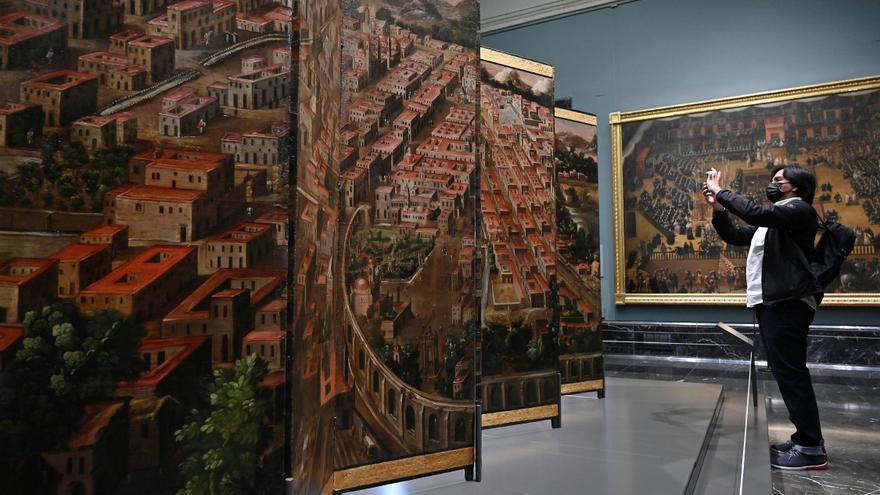 Madrid, April 20 (EFE) .- On the one hand, the peaceful life of Mexico City seen from the heights and, on the other, the fierce struggle for control of the city of Tenochtitlán: the Prado Museum shows an exceptional screen of the 17th century as a guest work to bring the visitor closer to the unknown American art of the time.

The screen, restored by the museum over the course of almost a year, belongs to a private collection and will be one of the fundamental pieces of “Tornaviaje”, the exhibition of American art that the museum will present this fall.

“It is an absolutely exceptional work,” said Miguel Falomir in statements to Efe.

The work is “an exceptional occasion to enjoy” the American art that arrived in Spain between the 16th and 18th centuries, when the sun did not set in the Spanish territories.

American art was then much more numerous than European art, as Falomir explained. “(At that time) more American artistic works arrived in Spain than Flemish or Italian”.

To date, very few of these specimens of screens have arrived and, although their origin is unknown, they were probably a gift from Mexico City to the Spanish viceroy.

These types of pieces are highly valued, in 2019 a similar copy was auctioned at Sotheby’s with an estimate between 3 and 5 million dollars.

The work presented today, in large format, is part of the program of invited works in the museum thanks to the Friends of the Museum Foundation and will be exhibited in room 16A until the end of September, when “Tornaviaje” opens, the temporary autumn exhibition , with which the museum wants to open its collection to new geographies.

The large-format piece, painted on both sides, has a wooden frame, linen panels painted with oil and has undergone a “laborious restoration process”.

“Screen of the Conquest of Mexico and the very noble and loyal city of Mexico” has suffered a lot until reaching the museum’s restoration workshop: it had numerous repaints, holes and several of its panels had come off.

In addition to removing repaints, varnish and dirt over the years, it has been necessary to reproduce a large part of the gold leaf frame that had been lost, as explained during the presentation by María Álvarez Garcillán, restorer of the art gallery.

The work, like the Garden of Earthly Delights, used to be used as a “conversation piece”, which were used in social gatherings to generate conversations around the scenes represented, in the words of Falomir.

There are two other similar screens, both in Mexican museums, and it is believed that they could be gifts from the city hall of Mexico City to the viceroys of the time.

On one side you can see twelve scenes and settings from the historical episode of the Conquest of Mexico, which mix action with chaos, fear and heroism, in no chronological order. “You can see the dignity with which the Aztec warriors are treated,” said Falomir.

In contrast, and on the other hand, a bird’s eye view of Mexico City is shown, like an orderly and quiet city in which some children play with a kite or the viceroy arrives in his float. Each side is accompanied by numbers to identify the most important places and events.