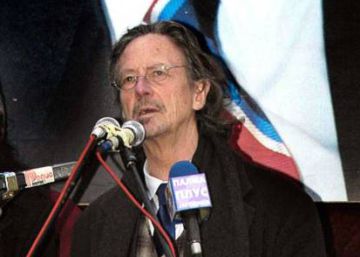 Two external members of the Nobel Literature Committee announced their resignation Monday. One, Gun-Britt Sundström, said he refused to place "the literary work above the politics", in reference to the award-winning Peter Handke, criticized by their proserbian postures during wars in the nineties in the former Yugoslavia. Kristoffer Leandoer's decision to no longer participate in the work of the Swedish Academy committee, on the other hand, has to do more with the slow process of renewal of the institution itself after a scandal of sexual harassment and leaks that shook its foundations. Both were appointed as members of the Academy for a period of two years.

His resignation, confirmed by the institution, takes place just over a week after the Nobel Prize-giving ceremony on December 10, the anniversary of the death of the Swedish industrialist and Swedish patron Afred Nobel. Leandoer indicated that he did not have the "patience" to follow the internal reforms that the academy had initiated after the case in which it was involved in 2017. Precisely for that reason, in 2018 no prize was assigned and this year the delivery was double: The Polish poet Olga Tokarczuk and Handke won the awards.

Sundström noted, among other reasons for his resignation, the Attribution of the Nobel to the Austrian. While he said he feels "happy" to have participated in the designation of Tokarczuk for the 2018 prize, he said he was opposed to the proclamation of the Austrian for the 2019 edition. "The election was not limited to rewarding a literary work but which has also been interpreted, both inside and outside the academy, as a position that places literature above the politics"he wrote in the newspaper Dagens Nyheter. "This ideology is not mine," he added.

The Swedish Academy had announced in October the recognition of the work of Peter Handke, described as "heir of Goethe", but whose postures proserbias during the conflict in the Balkans in the 1990s caused violent controversies in the past. The Austrian was accused of denying the genocide of the Bosnians, published several books supporting the Serbian version of the conflict and participated in the funerals of Slobodan Milosevic, who died in the prison of the International Criminal Court, where he was being tried precisely for genocide. At the funeral, Handke delivered a speech paying tribute to the late Serbian leader.

"I leave my position on the Nobel Committee because I have neither the patience nor the time to wait for the result of the work started to change," Kristoffer Leandoer said instead in an article published in Svenska Dagbladet. "The Academy and I have a different perspective on time, a year is too long in my life and too short in the life of the Academy," he said. Leandoer has clarified that his resignation is not related to the decision of reward Handke.

After having postponed the 2018 Nobel Prize for Literature announcement following a sexual assault scandal, two awards were announced this year. Kristoffer Leandoer and Gun-Britt Sundström were external members of the Nobel Literature Committee of the Swedish Academy, appointed to accompany the readjustment of the academy after the 2017 crisis, but they were not permanent members of the institution.