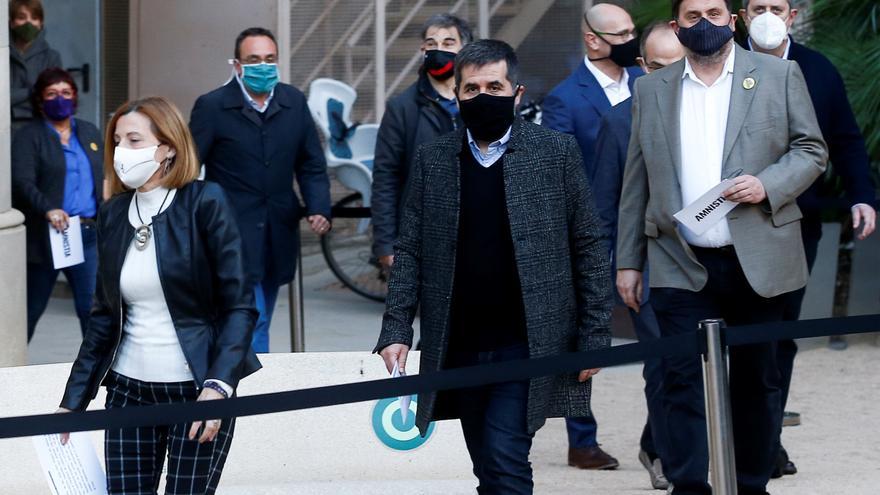 Defend pardons to "respond to the profound social and political crisis" that Catalonia is experiencing without the measure being understood as a reproach to the Supreme Court. This is the scale that the Government has tried to balance in the pardon files for the nine prisoners of the procés that has granted this Tuesday. In the argumentation of the grace measure for the former president of the Parliament, Carme Forcadell, and the former Labor Councilor, Dolors Bassa, to which elDiario.es has had access, the Executive justifies that the pardon "does not at all break the prestige" of the Supreme Court and is at the same time "an ideal mechanism to reduce social and political tension" and "guide the solution to the problem through the channels of political dialogue and understanding."

Among the three reasons enabled by law to grant pardons - justice, equity or public utility - the Government focuses on the latter to justify pardoning those convicted of sedition. "Few purposes are as worthy as restoring coexistence and harmony between Catalans or giving an opportunity for a new beginning in relations between Catalonia and Spain," remarks the government report, which describes the pardons as "a decisive step" to "normalize politics in Catalonia".

The pardons granted to the leaders of the procés, who will be released in the next few hours or days, are partial: they do extinguish the prison sentence that remains to be served, but it maintains that of disqualification from holding public office and they are conditional on none of prisoners commit a new serious crime in the next few years. In the case of Bassa and Forcadell, the period is three and four years respectively. If they commit a crime again within that period, the pardon will be without effect.

The dialogue launched between the Government and the Generalitat occupies a prominent place in the justifications for the pardon. The Executive alerts that the policy "based on confrontation" has prevented dialogue for several years, which is an "essential requirement" to preserve the political pluralism enshrined in the Constitution and solve social problems. The conclusion of the Government is that "a gesture of relaxation" such as pardon is necessary to "open opportunities for dialogue" despite acknowledging that the measure is not without "drawbacks" and "risks." The pardon "better satisfies the common good of Spain" insofar as it "can objectively favor the path of dialogue."

Without pardon the conflict would get worse

The finishing touch to the Government's argument are the events of last week that showed the loneliness of the leader of the PP, Pablo Casado, against the pardons. Thus, the Government emphasizes that the commitment to dialogue between the Government and the Generalitat "has been adding broad social support", and cites as an example the last plenary session of Congress that overturned a PP motion against the grace measure or the support of unions, businessmen and bishops to the measure. Not granting the pardon, adds the Executive, would contribute to "the aggravation and chronification of the conflict" and it would not be understood by Catalan society, "even non-independence".

The reports differentiate between the current situation and the sovereign autumn of 2017. During the peak of the procés, the sovereign leaders "not only acted ignoring the Constitution", the text highlights, but they also ignored "at least half of Catalan society that does not think like them and Spanish society ". But after four years, adds the Forcadell and Bassa reports, "Spanish democracy cannot forget them": their imprisonment "undoubtedly affects" the coexistence between Catalans and "hinders the overcoming of the conflict."

In this sense, the Government maintains that "democracy and the rule of law" have reminded those convicted that "those people whom they made invisible exist and that they cannot ignore them, that they must take them into account in their purposes." And now, already in jail, "Spanish democracy cannot forget them." "Among other reasons, because they have not been forgotten by several hundred thousand Catalans who constantly vote for political options that starred in and defend those events of September and October 2017," says the Executive. And he adds: "Those citizens will be able to see their leaders free and will understand that Spanish democracy gives them a channel to express their opinions freely and to defend their ideas normally.

The Executive draws a line between the "jurisdictional route" and the "political route", both "fully constitutional and respectful of the rule of law," he says in his reports. And he warns that the Executive, as guarantor of the general interest and peaceful and democratic coexistence, cannot conclude its assessment of the situation "merely legally." In the case of Forcadell and Bassa, their reports consider that they have "decidedly" opted for the dialogue, also defended by the Government, and cite the statements of the former president of the Parliament. in which he recognized that the independentistas had lacked "empathy" in fall 2017 or the statement of the ex-councilwoman in the trial in which she denied the unilateral way.

The Government also addresses all those citizens who disagree with the pardons, recognizing that the measure is "difficult" and generates "misunderstanding in a large part" of Spanish society. "It would possibly be easier for the Government not to grant it, but, in that case, we would be crossing our arms before the biggest political problem that Spain has and losing an opportunity for reunion and reconciliation within the new climate of institutional normalization in Catalonia that we intend favor with this decision ", argues the Executive.

The Supreme Court ruling is neither questioned nor modified

In its reports, the Government says it shares several "statements" of the Supreme Court ruling that condemned the pro-independence leaders and also other passages "about the legally reprehensible nature of the facts prosecuted" from the reports of the High Court and the Prosecutor's Office that they opposed the granting of the measure of grace. In fact, he insists that in no case do the pardons "empty of content" the sentence that condemned Catalan politicians for sedition and embezzlement - which is neither "questioned" nor "modified" - and reiterates that this measure "does not violate the absolute prestige ”of the Spanish courts and, specifically, of the one who judged the procés, the Second Chamber of the Supreme Court.

The Government also affirms that the pro-independence leaders were not condemned for their ideas, but for “the commission of acts contrary to the legal system”. It is the same argument that the Supreme Court made in its sentence and in other subsequent resolutions in which it has made it clear that it did not punish them for their ideas or statements but for their actions. In this regard, the reports state that “now the Government must assess whether by partially extinguishing their sentence it contributes to placing the defense of those ideas in the place they should never have left: the democratic institutions established by our Constitution, which protect us all and where we all have representation ”.

"Justice has acted to respond to undoubtedly reprehensible facts, but it is true that criminal punishment offers limited utility when it comes to pacifying conflict situations such as that experienced by Catalan society", reasons the Government, which also warns that the continuation of the imprisonment for several years of the procés leaders could generate a "false perception" of injustice and "reinforce the logic of disaffection."