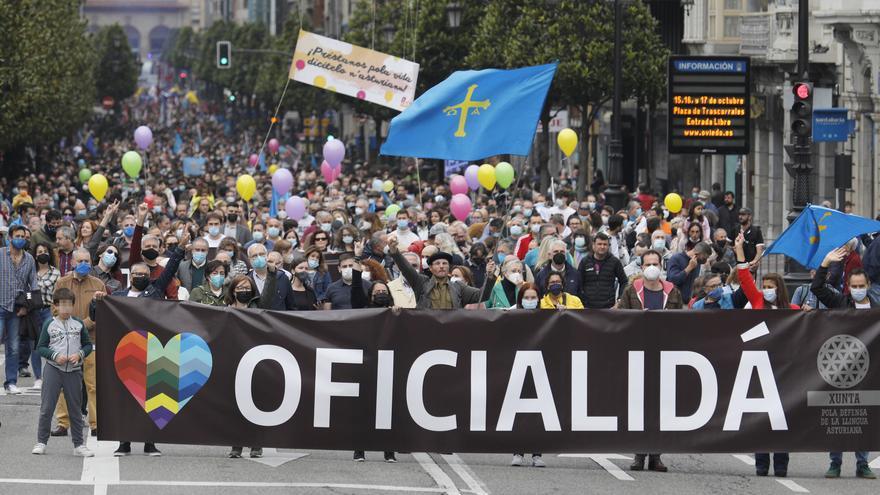 A massive demonstration has traveled this Saturday through the center of Oviedo to demand the official status of the Asturian and Galician-Asturian languages. The mobilization started from the Estación del Norte, in Oviedo, and ended in the Plaza de la Catedral, where they have read a manifesto.

The call has been made by the Xunta pola Defensa de la Llingua, whose leaders insist that officiality only means legally recognizing the right that any person has to freely use their own language in a territory. Thus, they consider that this officiality represents a democratic advance because it “expands citizen rights and freedoms.”

They consider that currently Asturian and Galician-Asturian speakers do not have their right to express themselves in those languages ​​legally recognized. “Why do they have less right than the speakers of languages ​​from other communities?”

The mobilization, in which thousands of people have participated, has been supported by the majority unions and by the political parties PSOE -which governs in Asturias-, Podemos and Izquierda Unida.

The Statute of Autonomy of Asturias, approved in 1981, already contemplates the protection of Asturian in its article 4 and says that it will promote its dissemination in the media and its teaching, respecting local variants. In 1998, with Sergio Marqués (PP) as president of Asturias, the law for the use and promotion of Bable / Asturian was approved, which currently regulates the protection of the language.

The current regulations, however, are not enough for the participants in the demonstration this Saturday, who demand that Asturian and Galician-Asturian be official and enjoy the same protection and development as other languages ​​of the country, such as Catalan or the Galician. The opposite, they allege, is a discrimination.