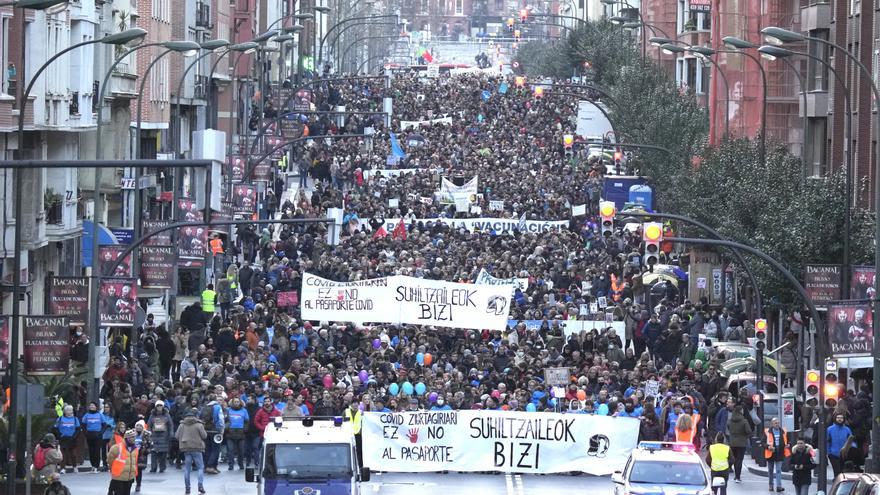 Various thousands of people, without masks or distance between them, have demonstrated this Saturday in Bilbao against the covid passport and the vaccination.

The march called by the Bizitza (Life) association had two main banners with the slogans "Askatasuna-Freedom" and "Passport to the dictatorship".

Bizitza has distributed a pamphlet in which he assures that in most Western countries the number of infections and deaths has increased since the population was massively vaccinated and in which he affirms that the passport is not "sanitary" and compare it with the "apartheid".

According to this organization, the Covid passport is "to control the people and discriminate against those who do not want the gene experiment".

"It is evident that this shameful passport that has been installed by means of experimental mass inoculation is not a matter of health but rather opens the door to a type of totalitarianism unknown until now, to a totalitarianism with no return," said Bizitza in his announcement.

In addition to the official banners, many of the attendees have carried other banners, posters and also environmental symbols.

Thus, others have been exhibited with slogans such as "Let's stop the experimental covid-19 vaccination", "You do not experiment with minors", "Your PCR kidnap children", "Protect your nature", "Inoculation is voluntary suicide, you will to allow with your children" or "Stop passport 'vacunazi'. Informative terrorism".