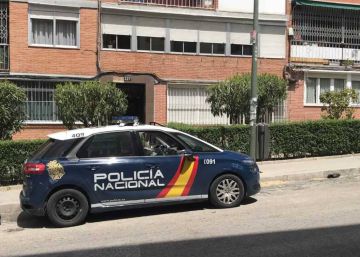 The National Police has arrested a man in his 75s in Jaén this afternoon who has confessed to killing his wife, Dolores L. R., 74. The couple was in the process of separation, but there were no previous complaints of gender-based violence, as confirmed by the police.

"I had to have killed her, I had to have killed her." It is the phrase that kept repeating Dolores's confessed murderer when agents discovered him locked in the next room where his victim lay. The woman was found with a bloody face "with a large hole" in the head, as described by the Jaén National Police. Waiting for what the autopsy determines, the death was caused by "the systematic hit with an iron bar," the researchers say.

During his confession, the husband – “about 75 years old,” according to the police – said he had killed his wife Saturday night, but investigators say “there are inconsistencies” between the statement of the detainee and the state in which the body has been found. "It shows signs that death could have occurred 48 and even 72 hours ago," as explained by the spokesman for the National Police of Jaén, which refers to the final results of the autopsy.

Apparently, the victim had gone to the house of one of her daughters to spend a season and would have returned to the marital home a few days ago, according to the police report. “There was a very strong dispute because of a telephone. Sexist attitudes that have led to the aggression and subsequent death of this woman, ”explains the police spokesman.

It was one of Dolores' daughters who, after twelve o'clock this Sunday, alerted 112 that she had found her mother murdered by a shot in the head and that she did not know where her father was. The police appeared minutes after receiving the notice at home, a detached house in the neighborhood of Santa Isabel in the capital of Jienense. The victim was prostrated in a half-open room. In another adjoining the agents heard some noises and had to open the door of the room by force. There they found the murderer confessed "in underwear and disoriented", as indicated by the Police. The woman did not die of a shot, as her daughter believed, but of repeated blows with an iron bar, according to the police report.

The Court of Instruction Number 4 of Jaén is investigating the case. This is Jaén's first sexist violence victim in 2019. If this murder is confirmed as a case of macho violence, as well as that of a surgeon in Madrid this Friday, there would be 40 women killed by this cause in 2019, and 1,015 since 2003. The telephone number for victims is 016. It operates 24 hours a day. It does not leave a mark on the invoice, although it must be deleted from the call log.

The storm “Gloria” will leave rain and snow today, especially in the east

Gloria, the “historic” storm, comes to the peninsula

The International University of La Rioja graduates 1,921 students in Ecuador