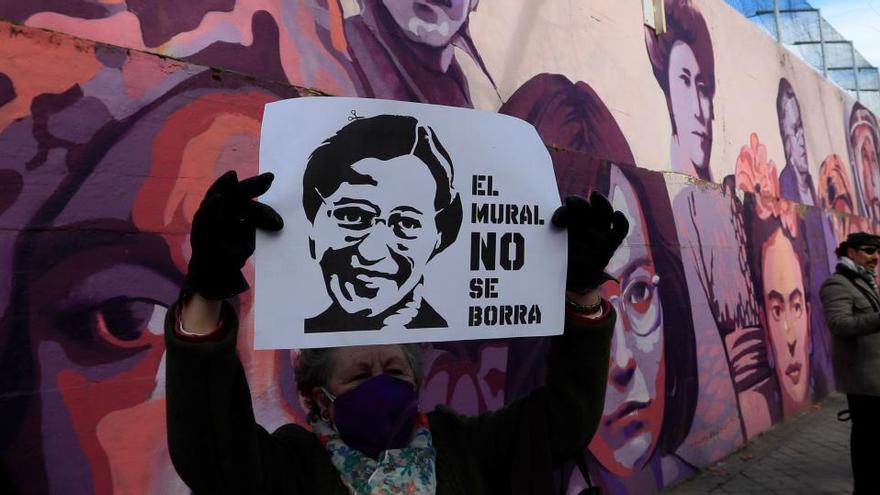 To the cry of “the mural is not touched”, several hundred residents of Madrid Concepción neighborhood have concentrated this Sunday to show their rejection of a Vox proposal why a mural with women’s faces like Frida khalo it will be replaced by another with Paralympic athletes.

A heterogeneous group of women that the group of Vox asked to “change” in the plenary session of the Linear City Board to instead execute another mural dedicated to athletes and sports that “does not contain any political message, only sports”.

Vox submitted an amendment to the proposition – which went ahead with the votes of PP and Ciudadanos- to specify that the painting, on that wall since 2018, should be dedicated to Paralympic athletes, before which the orange party presented another transactional amendment to add that five men and five women athletes should be represented.

Four days after that vote, politicians from PSOE, United We Can and More Madrid, neighbors, neighborhood associations, AMPAS, people of all ages have taken to José del Hierro Street shouting “the mural is not touched”, while on Change.org almost 40,000 people have signed so that do not allow “the destruction of women and their history.”

A neighborhood that participated in the execution and conception of this mural and that, like Julia, who has come with her children, Julia and Hugo, is used to seeing it almost daily.

Almost every day they pass in front of this painting because they go a lot to the nearby park. “Julia doesn’t say much, but Hugo calls it the mural of powerful women”, he comments.

She adds that “spending money, removing art, when there are thousands of walls, and when something that is part of history is being claimed” is something that for her “does not make much sense.”

Like all the people consulted by Efe, and as claimed in the manifesto, Julia sees “wonderful” that a mural is made about Paralympic athletes.

“But what to me my moral is that they want to remove this one, and I think there is a very ideological point (…). It seems a bit stupid to break art to build art, we are here to unite and not to take away “.

The initial idea of ​​’The union makes strength’ comes from the Equality Table of the Local Forum of Ciudad Lineal, explains to Efe Jorge Nuño, of the Unlogic Crew collective that devised and executed the mural, “participatory both in its conception and in its execution”.

“We made two sketches that were uploaded to the Decide Madrid website and the citizens voted the one they wanted. The idea that the district transmitted to us from the beginning when we had the neighborhood meetings is that they wanted a wall that represented equality, they wanted to give visibility to the role of women in history, “Nuño abounds.

Nor are they “satisfied” with some of the arguments they have heard these days justifying the removal of the mural.

“The criteria by which these women are on this wall are in no way political. We don’t even know, in many cases, what his political ideas were, and we don’t care about them. These women are here because each of their areas fought for real equality, and what we want is to make their struggle and their work visible, “he adds.

Nuño emphasizes that “it is always much easier to erase than to create,” but points out that “with the support we are receiving, we hope that erasing is not so easy.

The mayor of Madrid and national spokesperson for the PP, José Luis Martínez-Almeida, affirmed this Sunday that “it was as democratic” to decide to put it as now to remove it.