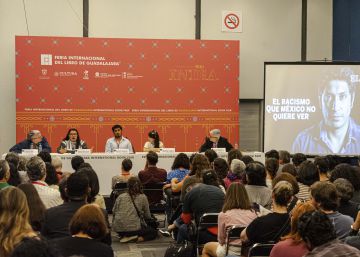 Discrimination because of skin color in Mexico has been a reality denied by Mexicans for years. The writers Yásnaya Aguilar, Emiliano Monge, Brenda Lozano, and the actor Tenoch Huerta have debated at the Guadalajara International Book Fair, at a table organized by EL PAÍS, about the conditions that allow racism to be latent in the daily life of the Mexicans. The talk has served as a speaker to reflect, recognize and condemn the practices, which according to various studies, prevent a part of Mexican society from advancing through discrimination related to their physical appearance.

EL PAÍS has presented at the literary event the documentary The racism that Mexico does not want to see, a story with experts and Huerta's personal testimony about the effects that racial discrimination has on people's lives. In it, the Narcos actor tells how he managed to reach the film industry despite the obstacle that his skin color represented in a world where Caucasian appearance is the most privileged and desired. Huerta told FIL Guadalajara that he has reflected on the nature of elites in Mexico, since these are the ones that perpetuate the characteristics by which they discriminate. "I do not understand why we have not thought of another way to make elites, why" arriving "does not mean making an inn and paying for the piñata?", He said.

The writer Yásnaya Aguilar has explained that racism is deeply rooted in Mexicans because it is an “institutional and systemic” phenomenon in which the State itself, over a long time, has been dedicated to implementing a structure "In which classifies bodies." "Who manages the capitalist and patriarchal system that establishes racism is the State," he says. The author Brenda Lozano has joined Aguilar's perspective and as a writer she has defined the importance of a narrative that reflects society as it is. "We have told stories from an erroneous and mostly masculine point of view," he says.

The interpreter of Güeros has told his personal experiences where he has been discriminated against and has flatly argued against meritocracy. The writer Emiliano Monge has defined that the starting point of Mexicans is different according to the social segment and the physical appearance with which they are born. “We can say that not all Mexicans leave from the same point. You get to where the system lets you go, ”he says. The author of Not telling everything, even, has ventured to give clues about those who have a racist perspective: "Everyone who denounces inverted racism is racist, because what he does is question his role or place in the system."

The writers and the actor, who chatted with Javier Moreno, director of EL PAÍS in America, also aimed at opening the culture to get it out of the elites to expand the landscape about what is considered a cultural product. All agreed that the representation of Mexicans should be broader and that from their trenches it is possible to achieve it. With full capacity, the participants of the discussion table joined to reject the premise that racism does not exist in Mexico and that a task is still pending on the part of Mexicans to break the historically established social order. "The State has the task of administering privileges, but then the communities also have the capacity to organize themselves to do deconstruction work," said Aguilar.

Joel Sarakula: “Melodies come easy for me since I played jazz as a child”

Rozalén: "Feminism advances slowly because it is a love revolution"